Book Review: Paul Stanley Lets It All Hang Out 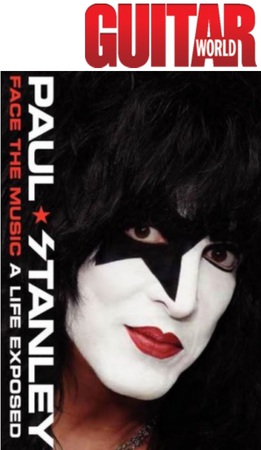 It’s no insult to the band to say that Kiss have always been about window dressing.

For years the members hid their true identities behind cartoon personas and hard rock anthems that were powerful and exciting, but did little to reveal the men behind the music. Kiss is undeniably good fun, but if you’re looking for deep insight into the human condition or deep emotional catharsis, there are other musical avenues to investigate.

That’s why guitarist Paul Stanley’s new autobiography, Face The Music: A Life Exposed (HarperOne), comes as such a surprise. After years of carefully maintaining his Starchild superhero identity, Stanley lets down his guard and unleashes a torrent of pent-up feelings that erupt and flow over 400 pages like molten lava.

Starting with his genuinely disturbing childhood, and continuing with the difficulties he’s had with various band mates over the last 40 years, the guitarist spares no one—including himself.

We already know he thinks that founding members, Ace Frehley and Peter Criss, are total screw-ups, but his feelings toward his lifelong partner in crime, Gene Simmons, will no doubt shock hardcore fans. While the current status of their relationship is fine, Paul recalls years of betrayal and neglect, which almost sunk the band during the Eighties.

The most interesting recurring theme of the book, however, is how Stanley, one of rock music’s most extroverted frontmen, struggled with his own fears and insecurities.

Face the Music is filled with passages like, “The character I created—the Starchild—would go up on stage and be that guy, the superhero, as opposed to the person I really was.” Or “During the short periods when Kiss was not on the road I would sit on the sofa in my New York City apartment and think, Nobody would believe that I’m home and have no place to go.”

If you’re looking for dirty sex and rock and roll, I’d suggest buying the supremely entertaining Nothin’ To Lose: The Making of Kiss (It Books) by Ken Sharp. But if you’re really interested in what continues to make Kiss tick, pick up Paul Stanley’s refreshingly honest tome.

Face The Music: A Life Exposed by Paul Stanley will be published April 8 by HarperOne.

Brad Tolinksi is the editor-in-chief of Guitar World magazine.