A Revealing Excerpt from Paul Stanley’s Memoir, Face the Music 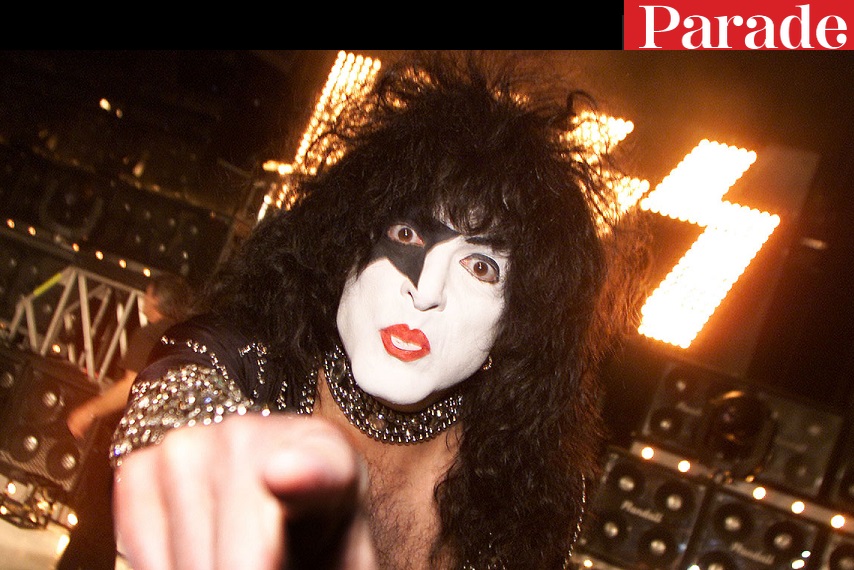 As Kiss is inducted into the Rock and Roll Hall of Fame this week, Paul “Starchild” Stanley, one of the glam metal band’s founding members, opens up about the group’s shifting lineup, infighting, and his personal struggles in his confessional-style memoir, Face the Music. Read an excerpt below.

I sit down and look in the mirror, staring for a moment into the eyes peering out at me. The mirror is surrounded by high-watt theater-style bulbs, and on the table in front of the brightly lit mirror is a small black makeup case. We hit the stage in about three hours, which means it’s time for the ritual that has defined my professional life for forty years.

First, I wipe my face with an astringent, to close the pores. Then I grab a container of “clown white,” a thick, cream-based makeup. I dip my fingers into the tub of white goo and start applying it all over my face, leaving some space open around my right eye, where the rough outline of the star will be.

There was a time when this makeup was a mask—hiding the face of a kid whose life up to then had been lonely and miserable. I was born with no right ear—I’m deaf on that side, too—and the most searing early memories I have are of other kids calling me “Stanley the one-eared monster.” It was often kids I didn’t even know. But they knew me: the kid with a stump for an ear.

When I was out among people I felt naked. I was painfully aware of being constantly scrutinized. And when I came home, my family was too dysfunctional to provide any kind of support.

Once the white is on, I take the pointed end of a beautician’s comb, one with a metal point, and sketch the outline of the star, freehand, around my right eye. It leaves a line through the white makeup. Then with a Q-tip I clean up the inside of the star. I also clean up the shape of my lips.

The character taking shape on my face originally came about as a defense mechanism to cover up who I really was. For many years when I first put this makeup on, I had a sense of another person coming out. The insecure, incomplete kid with all the doubts and all the internal conflicts suddenly got painted away, and that other guy came out, the guy I had created to show everybody that they should have been nicer to me, that they should have been my friend, that I was someone special. I created a guy who would get the girl.

The more I came to terms with myself, the more I was able to give to others. And the more I gave of myself to others, the more I found I had to give.

It was a quest, an unending push for what I thought I should have—not only materially, but in terms of who I should be—that enabled me to reach that point. It was a quest that began with the aim of becoming a rock star, but that ended with something else entirely.

And that’s really what this book is about. It’s also why I want my four kids to read this book someday, despite the fact that the path I took was long and arduous and meandered through some pretty wild places and times. I want them to understand what my life was like, warts and all. I want them to understand that it really is up to each one of us, that anyone can make a wonderful life for himself or herself. It may not be easy. It may take longer than you think. But it is possible. For anyone.

I collect my thoughts and look into the mirror again. There, staring back at me, is the familiar white face and black star. All that’s left to do is empty a bottle or two of hairspray into my hair and vault it up to the ceiling. And put on the red lipstick, of course. These days, it’s hard to stop smiling when I wear this face. I find myself beaming from ear to ear, content to celebrate together with the Starchild, who has now become a dear old friend rather than an alter ego to cower behind.

Outside, forty-five thousand people wait. I picture taking the stage. You wanted the best, you got the best, the hottest band in the world . . . I count in “Detroit Rock City” and off we go—me, Gene Simmons, and Tommy Thayer, descending onto the stage from a pod suspended forty feet above as the huge black curtain drops and Eric Singer beats the drums below us.

Fireworks! Flames! The initial gasp of the crowd hits you like a physical force. Kaboom! It’s the greatest rush imaginable. When I get out there on stage, I love to look out and see people jumping, screaming, dancing, kissing, celebrating, all in a state of ecstasy. I bask in it. It’s like a tribal gathering. KISS has become a tradition, a ritual passed down from generation to generation. It’s an amazing gift to be able to communicate with people on that level and have so many of them out there, all of them, all of us, together, decades after we started. The smile will not leave my face through the entire set.

Best of all, that smile will remain on my face as I walk off the stage to return to the totality of my life.

There are people who don’t want to go home—who never want to go home. And once upon a time, I didn’t, either. But these days, I love going home. Because somewhere along this long road, I finally figured out how to create a home, a real home, the kind of home where your heart is.