PAUL STANLEY TAKES US BENEATH THE GREASEPAINT WITH ROCK ICONS KISS 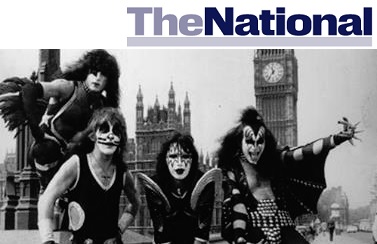 By October 31, 1998, Paul Stanley’s band Kiss had already spent a quarter of a century in make-up. “Clown White” greasepaint was the foundation upon which they painted their comic-book alter-egos. Stanley was The Starchild, his fire-eating, blood-capsule chomping co-­frontman Gene Simmons was The Demon, and lead guitarist Ace Frehley was The Spaceman. Drummer Peter Criss – clearly trading his sticks for the short straw – had the risible whiskers and dinky little nose of The Catman.

After their show at Dodger Stadium, Los Angeles that night, Kiss planned to decamp to the Sunset Marquis in Hollywood. They wanted to remove the make-up and outlandish stage outfits that had taken each of them the best part of two hours to put on. When their vehicle encountered the crowds forming the Hollywood Halloween parade, however, gridlock ensued.

“We were about seven blocks away when it dawned on me we could get out and walk,” recalls Stanley of the night the simple backdrop of Halloween enabled Kiss to stroll with the masses incognito. “Wow, man, great costumes!” commented one reveller at the time. “You really look like them!”

Stanley’s 462-page memoir is an eminently readable book. Jimmy Page and Dave Grohl big him up in the accompanying blurb, while, inside, a photograph of Lady Gaga wearing Stanley’s 7-inch, silver star-encrusted heels reminds us that the daft majesty of Kiss still has resonance for younger A-­listers.

Face the Music is both funny and highly entertaining. More surprising, perhaps, is learning just how much Kiss’s ascendancy depended on shrewdness and courage. There’s a telling moment where Stanley recalls deciding that “success wouldn’t happen by chance; it would happen by design”, and he doesn’t set much store by kismet. “In my experience, people who dismissed the success of others as luck were people who had failed,” he writes. “It was a way to absolve themselves of accountability.”

At root, Stanley’s book is a classic triumph-over-adversity story to ­rival that of Def Leppard’s one-armed drummer Rick Allen. When he was born Stanley Bert Eisen in 1952, Paul had microtia, a congenital deformity which meant he was deaf in his noticeably underdeveloped right ear. He details the trauma of other kids ­calling him “Stanley the one-eared monster”; home-life with his dysfunctional, decidedly non-touchy-feely family in Manhattan, then Queens, New York, does little to ease the pain. Unsurprisingly, he soon grows his hair long, this a way of disguising his ear and a badge of identification with Led Zeppelin and the Jimi Hendrix Experience, bands he’s greatly inspired by when he sees them perform in the US in the late 1960s.

It’s when Stanley meets Gene Simmons that the seeds of Kiss are sown, but Face the Music’s two-parts-disdain-to-one-part-respect take on the famously bumptious Gene is sustained throughout its pages. “He seemed arrogant and condescending, he could sing well and play bass well,” says Stanley of encountering Simmons for the first time in 1971, but he also teases-out the telling complexities of his and Simmons’s relationship. Writing about Gene’s adoring, Holocaust-survivor mother Flora, Stanley reports: “If I happened to call when he was in the bathroom, she would say: ‘The king is on the throne.’ I, on the other hand, couldn’t get a compliment out of my parents if my life depended on it.”

The book’s account of Kiss’s carefully calibrated rise is fascinating. No matter that Stanley and Simmons are chalk and cheese; their shared work ethic and unshakeable belief in Kiss is all the common ground they need.

Stanley says that one of the master strokes of the band’s first manager Bill Aucoin, a former cinemato­grapher, was to insist that Kiss were never interviewed in civvies. Live, the group’s superior grasp of theatricality owed something to Aucoin suggesting that they videotape their rehearsals. We also learn that the endearing slogan “You wanted the best, you got the best!” which still booms from PA systems whenever Kiss perform was coined by the band’s road manager, J R Smalling.

Apropos Kiss’s extensive and groundbreaking use of pyrotechnics, meanwhile, Stanley affirms that, in the early days, health and safety didn’t come into it. “We just ‘auditioned’ a few maniacs who liked to blow [stuff] up,” he says. “We probably saved lives and property by hiring these guys and keeping [them] off the streets.”

He’s also very honest about Kiss’s limitations, acknowledging that they just “didn’t have the musical vocabulary” to stretch out arrangements à la Led Zeppelin. Thus, when Kiss employ the studio whizz Bob Ezrin (Alice Cooper, Lou Reed) to produce their classic 1976 album Destroyer, Ezrin must take the bull by the horns. “He wore a whistle around his neck and called us ‘campers’,” recalls Stanley of the sessions which yielded such Kiss classics as Shout It Out Loud and Do You Love Me? “He told us we didn’t know anything – which was true.”

While we best draw a curtain of discretion around the hotel room dubbed “The Chicken Coop” that Kiss rented to entertain female ­admirers, Stanley largely avoids the kind of graphic details found in books such as The Dirt, the collective autobiography of Mötley Crüe, a band greatly influenced by Kiss. He’s also honest about how, in the 1970s, the “bubble” of touring was particularly hard on long-term relationships. “Wives and girlfriends quickly became abstract realities because there were no cellphones and hotel phones were expensive,” he writes.

All through the book, Stanley’s frank and grounded account of where he is at, personally, runs parallel with the fantasy writ-large that is Kiss. “In truth, I [was] the Wizard of Oz: the awkward little man behind the curtain operating this huge persona,” he writes. Accordingly, he undergoes therapy to try to unpick the childhood traumas that have rendered him “­remote and inaccessible”, and ponders the gulf between his onstage surety and offstage ­emptiness.

Pricey acquisitions such as vintage guitars and Tiffany lamps (!) don’t scratch the itch. Neither do fame or “hot and cold running women”. But in the early 1980s, advances in medical science grant Stanley a life-changing experience. When he undergoes reconstructive surgery on his ear at a hospital in New Hampshire, even Simmons grasps the event’s import for his bandmate. “[Gene] was going through a period of being very afraid to fly,” writes Stanley, “so I gave him a lot of credit for visiting.”

Kiss fans will be intrigued to see how Stanley’s memoir treats Criss and Frehley, fellow founding-members that Stanley and Simmons came to see as a ­liability and let go (Criss was sacked in 1980; Frehley’s departure was “negotiated” in 1982). There are at least four sides to the story, of course, but Stanley makes a sound case for ousting Peter and Ace, painting the former as someone prone to quixotic and outrageous demands and the latter as “the laziest person I ever met”. Stanley also argues that, while he himself was moderate in his use of stimulants and Simmons was teetotal, the well-documented drug and alcohol problems of Criss and Frehley soon atrophied their gifts.

Be that as it may, nobody can resist the bucks on the table for a reunion tour beginning in 1996 (it grosses US$43.6 million [Dh160m]), even if subsequent tensions are inevitable. “These guys are just terrible,” says Kiss’s second manager Doc McGee when Criss and Frehley prove unreformed characters. “I run a management company, not the Red Cross.”

Kiss soon reboot themselves without Criss and Frehley, but the sense of peace that has long eluded Stanley only comes to him fairly late in life. In 1999, aged 47, he wins the lead role in a Toronto production of The Phantom of the Opera and has an epiphany: “Was it possible that the Phantom was – in a way – me?”

When Stanley subsequently receives a letter from AboutFace, a charity helping children with facial differences, he knows he must get involved. “Here, perhaps, was a way to heal my soul,” he writes, and so it proves.

Face the Music is a unique and inspiring rock memoir. There’s plenty of substance beneath the greasepaint, and Stanley shows that there’s a lot more to him than lyrics laced in double entendres. At the book’s close he’s 62, happily married to his second wife Erin and pondering a future incarnation of Kiss that has none of its original members. “We’ve never subscribed to the limitations other bands impose on themselves,” he writes. “Kiss could – and should – go on without me.”

James McNair writes for Mojo magazine and The Independent.