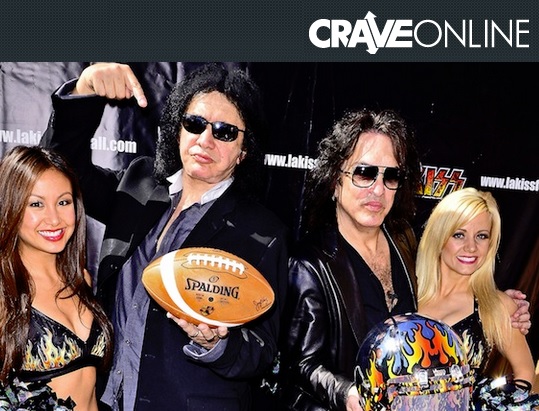 Along with bandmate Gene Simmons, the legendary rockers are now co-owners of their own pro football team.

The Los Angeles area had been yearning for a pro football team ever since the Raiders left for Oakland. Well, there were some folks listening to those cries and an unlikely suitor wanted to deliver.

Gene Simmons and Paul Stanley from the legendary rock band KISS, brought pro football back to the community (technically Anaheim). Its not the NFL but it’s a whole other beast – Arena Football.

Simmons and Stanley are the newest owners in the AFL with their team, the L.A. KISS — a loud, wild, and entertaining franchise, as one would expect.

I had the opportunity to attend a game at the Honda Center where the L.A. KISS took on the Cleveland Gladiators. Although an avid football fan of both the college and NFL levels, I had never attended an arena football game. Honestly, I had no idea what to expect upon arrival.

It was total chaos, to be honest. It was pure entertainment. It was nothing short of a spectacle. Trying to describe it is rather difficult. It’s as if the world in Mad Max had a baby with a rock concert and a monster truck rally with Simmons and Stanley as the doctors delivering us the baby. You won’t see any NFL games that have the pure craziness that you will endure at an L.A. KISS game.

For starters, the introductions were about five to ten minutes of non-stop fireworks, laser beams, and hard rock while the players ran on to the gray field. The national anthem was of course, an electric guitar solo. The coin-toss was performed by Frankie Banali, the drummer from Quiet Riot — all of that entertainment was just before the game.

During play, the showmanship doesn’t stop. While the players are on the field sporting their wild uniforms, there are half-naked women dancing in cages suspended about 90 feet above the field. There are stops in play for drum solos, and professional trick bike jumps where a design of Gene Simmons’ tongue acts as the ramp.

KISS and football? It might not be peanut-butter and jelly but its definitely making its mark on the sports world.

The devoted KISS music fans who buy season tickets get free tickets to a KISS concert, so they’re flocking to the scene while the casual sports fan aren’t far behind with their morbid curiosity.

What was this all about? What got KISS wanting to own a football team? I had to get the words straight from the horse’s mouth. Paul freakin’ Stanley, ‘The Starchild,’ decided to answer CraveOnline’s questions about football, music, his book, the Hall of Fame, and what KISS has in store for us.

CraveOnline: Paul, did you ever think when you started with the band, that you would own a pro football team?

Paul Stanley: No. I never thought I would be a rock star 40 years later either. Its been exciting. You know life is what you make it. That’s basically what I was trying to say in my book (Face the Music). I was born deaf in one ear, without an ear. I had all kinds of problems at home, learning problems in school, and was very unhappy, and had all kinds of self-image problems, and thought becoming famous would be the answer so I became famous…luckily. I found out that’s not the answer. Contentment comes from inside. You gotta figure out how to be content. Look, you have choices in life.You can put a gun in your mouth, you can put a needle in your arm, or you can roll up your sleeves. If you’re a victim, you’re a victim by choice. My story has been inspiring to a lot of people in and outside of music which is terrific for me. I am enjoying that quite a bit. I wrote a book that I wanted my kids to be able to read as they got older and for other people to realize that I’m not that different from them.

Paul Stanley: The idea of L.A. KISS football to have a team, that is, really, in the process of breaking all the rules which is what KISS is all about. The AFL is the black sheep of football and the L.A. KISS are the black sheep of the black sheep. We are trying to up the game and raise the bar so people get more for their money. That’s what its always been about. There’s no reason when you go to a sporting event you have to mortgage your house, sell your car, or can’t take your kids cause its too expensive. We want this to be family entertainment and at the same time give you more than a half-time show with somebody dressed like a hamster or a wolverine jumping around on the field. We’ve got amazing dancers; hot as they come. We’ve got live music, we’ve got BMX bike riders, its an all-in, all encompassing evening. We want to give a wake-up call…a wake up, shake-up call to as what is possible.

CraveOnline: Speaking of your book, Paul, how did it feel to get that out on paper? Was it emotionally and mentally draining to revisit all of that?

Paul Stanley: Living it was emotionally draining! Its funny cause some people have said to me “Was it cathartic to write the book?” and I said “No. Living it was cathartic.” Putting it on paper was the easy part. I’ve found out in life that the more you give to people, the more you get and for me, the most healing thing in life is to help other people. To write a book that reveals my insecurities and my disabilities is only something that comes back to give me a huge bonus. You know if i can help other children or help their parents, or help spurn other people through their difficulties, its a great bonus.

CraveOnline: Congrats on KISS entering the Rock and Roll Hall of Fame. What does that mean to you to earn that honor after all of these years?

Paul Stanley: it doesn’t mean that much to me. It means a lot to some of the fans and i understand that. The truth of the matter is, the Rock and Roll Hall of Fame is a sham. Its a fake in the sense that its not the people’s Hall of Fame. A few people bought the name, they came up with the name, and that’s why every year, when you’re hear who is being inducted, there’s at least two or three people who you don’t even know who they are. Because its not voted on by the public. I’ve been in the Rock and Roll Hall of Fame for 40 years. This is just a private little club. And since it has a very impressive name, I understand the fans wanted us in there and believe we belonged in there. And I go along 100% and was there to honor our fans and all previous members of the band.

CraveOnline: What does your family think of the L.A. KISS experience?

Paul Stanley: Everybody’s just loving it. Its part of a mentality that we’ve always had in KISS which is the idea of giving bang for buck, more for your money, and making something really entertaining beyond what the norm is. I think we raise the bar in terms of what rock concerts are. Its clear when you go to see anybody from a country act to a rock act, to a rap act, that there’s KISS DNA in everybody’s shows. And I look forward to a time when there’s going to be L.A. KISS DNA in all kinds of sports.

CraveOnline: I understand you designed the uniforms. What was the goal in your design and how was it initially received once they were revealed?

Paul Stanley: When it came out, most people were blown away cause nobody had seen anything like it. I wanted to create a uniform that you had to have, I don’t want to say, balls to wear, but wear proudly and back it up. We’ve got a team that is in the early stages, and has growing to do , and learning to do, to work as a team, and perhaps supplement some of the areas that need a bit of work. But I wanted to create something where you went out on the field and knew that you had to live up to what you were wearing. I wanted superheroes on the field.

CraveOnline: What was the appeal of owning an arena football team? What made you want to jump on board?

Paul Stanley: What made it so challenging, was there were incredible challenges that come with it. The AFL is misunderstood. I don’t want to say its mis-publicized but the fact is, a lot of people aren’t aware of it. There’s an idea that the people who play, these great athletes, are like third rate. They’re the upper one percent of players available. There’s only so many slots in the NFL. Its a great game. You’re basically sitting on the field. There are no sidelines. You’re really part of the game. It can be incredibly high scoring. It was a challenge we wanted to rise to. L.A. doesn’t have a football team. Anaheim is an incredible market in terms of great people there. There’s a great children’s hospital there that we’re involved with. We wanted to bring something to the community. The Honda Center welcomed us and made us feel very much at home so we couldn’t say “no.”

CraveOnline: How often do players or fans come up to you and want to know all about your wild stories of the past and want what happened on tour? Is that something you get asked about a lot?

CraveOnline: Do you have any plans to dabble in any other professional sports?

Paul Stanley: Its hard when you’re climbing one mountain, to think about the one you’re gonna try and climb next. We’re still climbing.

CraveOnline: Growing up, did you have any football teams or sports teams you followed?

Paul Stanley: Well, we had the Giants. Sports were very different when I was a kid. I hate to say there was more of a purity in terms of, it was something that didn’t cost you an arm and a leg, and it was something that families went to participate in. At one point, we had the Yankees, the Mets, the Dodgers, there was the Rangers, there was the Knicks. There were a lot of sports for us back then.

CraveOnline: What would an AFL championship mean to you?

CraveOnline: What is it that you would want fans to know above all else about the L.A. Kiss and arena football?

Paul Stanley: The live experience of an Arena football game is unlike any other because you’re virtually on the field. The worst seat in the house is better than most of the seats you will get at other football games. The fact that its in an arena and they’re playing on a much smaller field, gives it an incredible adrenaline rush. Its something you have to see because once you go, you’re going to want to come back.

CraveOnline: Any chance at a free KISS makeup giveaway for the fans this season?

Paul Stanley: There’s loads of great things coming up. Loads of great giveaways, loads of great theme nights, and again we are raising the bar. We’re going to show what is possible for a team and for a sporting event. All bets are off. Whatever anyone else has done; we’re gonna top it.