CONFERENCE CALL WITH THE PRESS 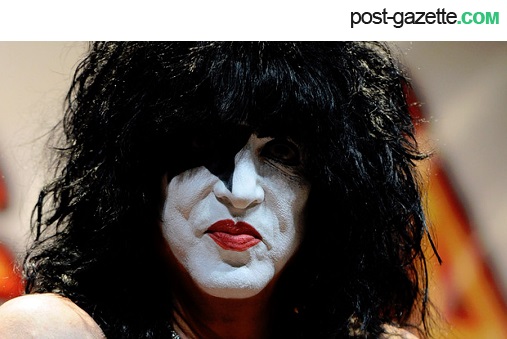 Paul Stanley of Kiss is a on conference call right now with the print media. Here’s what he has to say about his book, “Face the Music: A Life Exposed,” and tour with Def Leppard, which stops at the First Niagara Pavilion on Aug. 24.

Changes for this tour: “I believe this is the greatest and the best stage that we’ve ever had… We call it the spider stage, because the light are in shape of a spider and legs dangle down to the floor.”

Residency in Vegas?: “Time tells all.”

On Def Leppard: “Always tried to have great bands on tour with us. We want to make sure people get their money’s worth. A night of great music, songs that you know, that you connect with personally. Huge catalog of hits that all mean something.”

Refreshing to be back to that after drama with Rock Hall?: “[Hall of Fame] was not much more than a mosquito buzzing around my ear… no small organization with a big name can call the shots … Hall of fame is ultimately what the people decide is in the Hall of Fame. It was an interesting divergence of what we do.”

New book – Were you happy about how it turned out: “I would have to be happy about the way it turned out, because I wrote it … It was great to document something that I believed could inspire other people.”

Loyalty of fans: “You can’t have the kind of dedication we have from fans unless they sense the same dedication [from the band]… We may not always do what makes every fan happy, but we stick to our guns. … More people than I can count that have Kiss tattoos. That’s like being a lifer in the army… Kiss Army started on the street. No army like a Kiss army.”

Nashville: “I love what Nashville has grown into, which is an embrace of all music.”

On the Information Age: “I think that certainly in all walks of life, there’s a certain mystique that is gone … Not sure kiss could have accomplished what we did in this time … We could make sure that photos weren’t available ,,, we could create this mystique which was not unlike the mystique of Hollywood.”

Tom Morello: “Saw him about 10 days ago. It was his 50th birthday. Tom was Moses in terms of having us inducted, or indicted. Tom did a stellar job.”

Visit Hall of Fame?: “Up until now, I wanted little to do with it. ” He said “it was an annex that wanted our memorabilia to [make money]. At this point, I would love to see it.”

Fans and band: “We have outlived [the critics] and in essence have taken over.”

Military: “Can’t say enough about the people who served on our behalf… There’s nothing corny about patriotism… You only see people going under the borders to get into this country.”

On loss of anonymity: “You don’t complain about taxes if you win the lottery. It never was a source of stress or point of contention, but we in some ways are so much bigger now. Now we are Superman and don’t have hide behind Clark Kent.”

Kiss songs: “All of these songs as songs of victory, songs that celebrate our winning. That we are are here 40 years later is a source of incredible pride… These are the songs of a battle won.”

Arenas vs. Sheds: “We try to be observant of low-flying planes … It doesn’t change anything because what we do comes from the heart. … Being outside during the summer is a terrific dichotomy/contrast to what we do. We’ve been doing this for 40 years, the reason why people still buy tickets to see the classic acts is you know we will deliver the goods.”

On autotune acts: “You know damn well they will not be able to put on a show…. Don’t want to hear this nonsense that it’s impossible to dance around and sing. It didn’t stop the Temptations, Tina Turner, James Brown.”

How big a factor was the spectacle in Hall of Fame induction: “I’m not here to defend what we’ve done or what we’ve accomplished, but it is unanimous and resounding … countless artists were influenced by us, musically, not in terms of a stage show…. [mention Jann Wenner losing his passion for music and sarcastic intro — “he’s embarrassing himself, the joke’s on him”] … Nobody will ultimately buy for decades music that isn’t good.”

Hall of Fame: “It was vindicating for us, and vindicating for the fans. .. for every clueless music exec there are musicians, be it Tom Morello or Joe Perry or a list that literally is a who’s who of music, those are the people who got us in…. It was the pencil pushers who wanted us out.”