Paul Stanley struts like a man who’s having the last laugh. 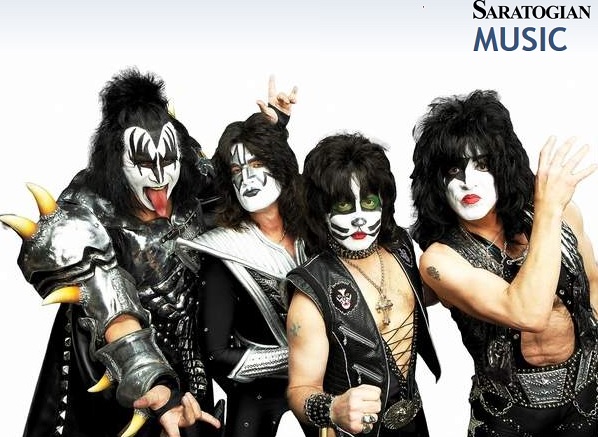 Paul Stanley struts like a man who’s having the last laugh.

To those who would dismiss his band Kiss as a bad joke in makeup and high heels, he points to their induction into the Rock and Roll Hall of Fame this year. To those critics who have refused to take their music seriously, he talks with pride about the group’s 40th anniversary tour that includes a stop Tuesday night at Saratoga Performing Arts Center.

“Going out on this 40th-anniversary tour is a way to restate who we are and put our eight-inch heels firmly back on the ground and let people know that the legend lives, that everything they’ve heard remains true,” Stanley said during a phoned press conference with rock writers around the country. “When we started, there were no shows like us. It reached the point where many bands had Kiss shows. Any band with money can do a Kiss show, but no band can be Kiss.”

The freaky makeup and bombastic stage show are what put Kiss on the map, but 40 years in, Paul Stanley feels it’s time journalists considered the music behind the glitter.

“There were no bombs or lasers inside those albums we sold,” he said. “The songs have stood the test of time, and anybody who fails to see that, denigrates it or marks it with smart-ass remarks when they’re introducing us like (Rolling Stone Magazine publisher Jan) Wenner did (at the Rock and Roll Hall of Fame induction) about our tight pants and makeup or whatever he said, is embarrassing himself. He may have a few burnouts who share his view and snicker with him, but they’re in the vast minority. The joke’s on him.”

Not that flamboyant staging isn’t an important part of the Kiss anniversary tour.

“I believe this is the greatest and best stage we’ve ever had. We took it to Europe and it was a huge success,” Stanley said. “We call it the spider stage because the lights are actually in the shape of a spider. The legs are actually dangling down on the stage and move. I wanted the stage this time where the lights and the stage were one instead of having the lights hanging from the ceiling.”

The Kiss sound and image have changed little in 40 years, but their lifestyle has. They’ve now been seen in public without their makeup, and they have private lives.

“Clearly there was a time when backstage was hedonism at its finest. When you’re given the keys to the candy store, you tend to eat a lot of candy. I certainly had a sugar high. So, over the years that obviously changed,” he said. “Over to the side of the stage certain nights, I see my little ones in their pajamas waiting for the show to be over to go to bed or family, which is something which at one point had no place in my life.”

And like the general public, this band’s attitude toward the military has become one of wholehearted support.

“As far as Wounded Warriors and USO, we have been very vocal over the past years about our obligation to our troops and the people who serve voluntarily and put themselves in harm’s way so that we can live in a free society and sadly at some point it seems some of us take it for granted,” Stanley said. “These freedoms we have come at a huge price to people who go unrewarded and unheralded for what they do. So over the years on various tours we have given a dollar from each ticket (to the Wounded Warriors and USO) and that’s what we’re doing once again. There’s nothing corny about celebrating this great country.”

Callout: “This 40th anniversary tour is a way to restate who we are and put our eight-inch heels firmly back on the ground and let people know that the legend lives.”