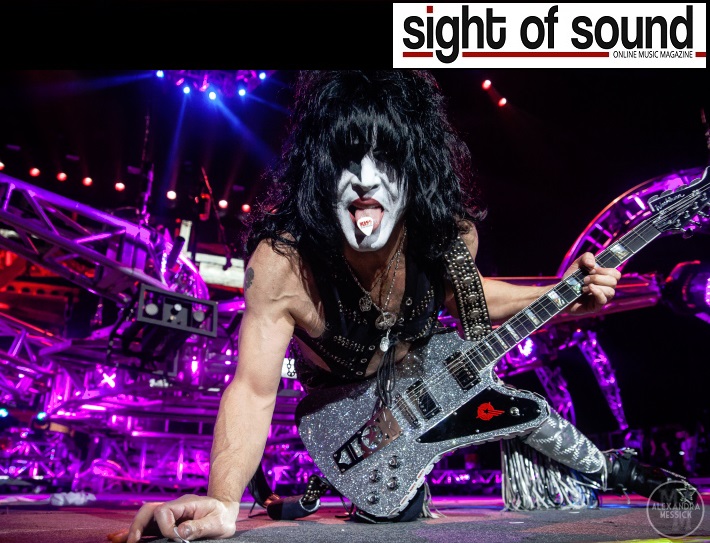 The KISS army is arguably one of rock’s most devoted fan bases, thanks to a combination of careful marketing, and an intense live show. The KISS army came out in full force on Friday night to Jiffy Lube Live in Bristow, VA. Decked out in face paint, band t-shirts, and even replica costumes of KISS members themselves, the audience was in for a show that was truly a spectacle to behold. Newly inducted into the Rock and Roll Hall of Fame, KISS set out on a summer tour for the books with support from none other than the legendary Def Leppard.

The amphitheater at Jiffy Lube Live was packed, and a deafening roar arose when the black curtain shielding the stage from view finally dropped at 9:45 PM, to the opening riff of “Psycho Circus.” KISS plays to the audience like no other, just as one would expect from a band that has come to define rock and roll bravado. Posing for photographers and pointing and waving to fans, the band made the show feel almost intimate, which is rarely a word used to describe a show at one of the largest venues in the area. The stage was dominated by a giant metal spider apparatus which, unfortunately, became stuck during their opening sequence leaving drummer Eric Singer blocked from view until the fifth song, when the band left the stage so that the spider could be rendered operational once more. The giant spider personified rock and roll excess as it dominated the stage and used its mechanical arms to lift band members up and down on small platforms.. As one would expect from seasoned professionals, the band played through the technical difficulties like nothing happened.

After their brief exit from the stage after, “Hotter Than Hell” (during which the demon himself Gene Simmons breathes fire), the show went on. Though Paul Stanley and Gene Simmons are 62 and 64 respectively, they played through the 15 song set with fake blood, fire breathing, and even a short flight into the audience on wires without losing a bit of energy or skipping a beat.

If nothing else, KISS proved that no band has to embrace the “aging rocker” archetype after they hit fifty. Gene Simmons still unfurled and flicked his tongue, licking his bass and breaking just as many hearts as ever, while Paul Stanley and Tommy Thayer gyrated their hips and leaped around the stage in platform boots with an impressive balance of grace and…well, balance.

More than anything, the show was fun, and the set list was tastefully chosen. Fifteen songs provided just the amount of time to let loose and enjoy the show without getting bored. The production kept the audience fixated with sparks, fog, and explosions perfectly synchronized to the music. They played a good mix of classics from their extensive discography, and finished off the night with the immortal anthem “Rock and Roll All Nite,” to a roaring audience.

No matter what kind of music you are a fan of, everyone should go to a KISS concert at least once in their lifetime to see rock and roll done the right way.

Check out our exclusive gallery from the show at http://sightofsoundmagazine.com/2014/07/28/kiss-dominates-jiffy-lube-live/