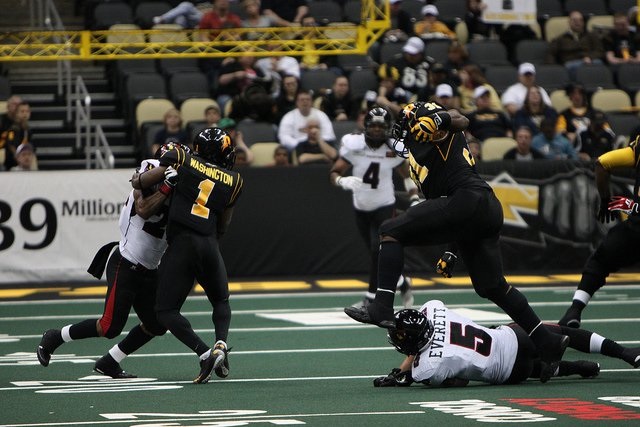 Arena football has suffered in the past due to revenue and popularity, but with the help of two KISS rockers, the AFL may be on its way to gaining the respect that it deserves. Gene Simmons and Paul Stanley of KISS draws attention to their recently new partnered AFL team, the Los Angeles Kiss, and to the Arena Football League in their new show 4th and Loud. Not only has America’s top rockers helped the LA Kiss grow as a franchise, but they are also hoping to expand the entire AFL in 4th and Loud, which airs every Tuesday night on AMC.

Gene Simmons and Paul Stanley from KISS recently became co-owners of the LA Kiss, one of the AFL’s newest expansion teams and Los Angeles’ only professional football team. The show follows Simmons, Stanley, head coach Bob McMillen and their football team from the start to the end of their season, opening the eyes to football fans all over the nation as they are able to compare both positive and negative points between the NFL and AFL. Simmons and Stanley also had the chance to design new helmets and uniforms for the LA Kiss, which includes the well-known KISS logo and flames. They also enhanced the entertainment aspect of the franchise, which was an obvious expectation in the initial co-ownership signing.

This week’s first episode of 4th and Loud, focused on Washington Redskins’ 2008 sixth round pick, Colt Brennan. Brennan had a phenomenal record-setting college football season in Hawaii prior to the Redskins drafting him and was predicted to do well in the NFL. After being released in 2009 due to a hip surgery, Brennan entered the free agency with the Oakland Raiders. Soon after, he was involved in a car accident that nearly took his life, but left him with severe brain injuries that changed his life instantly. The LA Kiss recruited Brennan for tryouts as their number one choice to be their starting quarterback, but Brennan was left on the sidelines to watch as he awaited to be cleared by his doctors, including his neurologist. Brennan’s doctors rejected his clearance to play football and questioned whether or not he would ever be cleared to play again. The current LA Kiss quarterback is the second choice, AFL veteran J. J. Raterink.

When Americans think football, they undoubtedly think of the NFL. A significant number of the population may be clueless to the NFL’s little brother, the AFL. This league consists of 14 teams from coast to coast, including Chicago, Arizona, Orlando, San Jose, Portland, Cleveland and Pittsburgh. The Arena Football League consists of B-level football players who have either been in the NFL before, players who have played all their lives through college, and even tryout walk-ons who just love the game of football. They arguably may even have more passion for the game than NFL players as they compromise with a significant pay difference. Despite where they originated from, many of these players are looking to be recognized by recruits and to one day play for the big league. The only problem is, when being compared to the NFL, the AFL lacks the attention it needs to become even worth looking at.

The Arena Football League may have suffered from popularity before, but 4th and Loud may be the answer to draw in attention and new fans to their home teams all over the nation. Arena Bowl XXVII will be taking place on August 23. The Cleveland Gladiators will host the Arizona Rattlers in AFL’s version of the Super Bowl, but many may not be aware of this unless they have grown to be a loyal AFL follower. The Los Angeles Kiss season may be over for the year, but with the help of 4th and Loud, the Arena Football League may grow significantly and may have a expanded fanbase by next season.