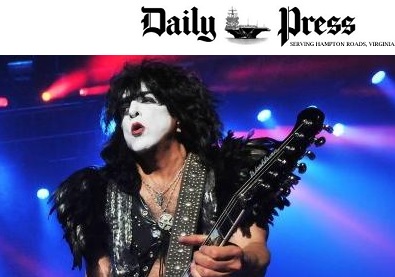 As the band comes to Virginia Beach, Paul Stanley talks about its legacy

Four decades after they first put on the makeup and the stacked heels, KISS is back out on the road and pulling into the Farm Bureau Live amphitheater in Virginia Beach on Friday night.

Guitarist Paul Stanley and bass player Gene Simmons remain from the original lineup, and for the past decade have been joined on stage by guitarist Tommy Thayer and drummer Eric Singer. The opening act on this summer’s tour is Def Leppard.

At the start of the tour, Stanley held a teleconference on which he discussed the tour, the past 40 years, and the band’s long-awaited induction into the Rock and Roll Hall of Fame this year.

Q: What is the stage show and the light show for this year’s tour going to be like?

Stanley: It’s the best stage that we’ve ever had. We call it the Spider Stage, because the lights are actually in the shape of a spider and hanging down over the stage. I wanted a stage where the lights and the stage were one – instead of lights hanging down from the ceiling. The lighting and the stage are by far the best thing we’ve done. The band is firing on all cylinders. But this is a celebration of everything that we’ve done to date.

Q: You’ve always been known for your spectacular stage show and your pyrotechnics. When you take that show from an arena and into an outdoor amphitheater, such as the one in Virginia Beach, does that create any new challenges or any new opportunities for spectacle?

Stanley: We try to be observant of low-flying planes when we’re outdoors. (Laughs.) Playing outdoors changes the environment. In an arena, there’s a claustrophobic feel, all being enclosed and entombed and encapsulated, which has it pluses. But being outside during the summer is a terrific contrast — being outside in the midst of a great summer night, with the stars shining. But it doesn’t change anything that we do.

Q: How gratifying was it for the band to finally get honored by the Rock and Roll Hall of Fame after so many years waiting?

Stanley: The Rock and Roll Hall of Fame wasn’t anything more than a mosquito buzzing around my ear. It’s always been about the band and the music and the fans. No small organization with a big name can ever decide what truly matters, or what is valuable. The Hall of Fame, no matter who owns the name, is determined by who the people believe belongs in the Hall of Fame. That’s our vindication – great shows, and great fans. They’re more a tribe than they are just fans. A multi-generational tribe. That means so much more to us than any Hall of Fame.

Q: What is it that has allowed KISS to develop and maintain such a loyal fan base over the course of 40 years?

Stanley: You can’t have the kind of dedication that we have from our fans unless they sense the same dedication from the band. The only way you can be in KISS is you not only have the ultimate respect for the band, but you also have to have that same respect for the fans. It’s intertwined. If you lose that, you’re no longer in this band. I’ve met more people than I could count who have KISS tattoos. That’s like being a lifer in the Army. You can put on a uniform and take it off, but when you tattoo yourself that’s for a lifetime. That’s a sign of dedication.

Q: Has the band had a chance to visit the Hall of Fame now that you’ve been inducted?

Stanley: Up until this time, I wanted very little to do with it. Here was an annex of an organization that was asking for memorabilia so they could charge money for people to see it, but didn’t want to include us. But now, I guess it would be interesting to see it.

Q: In the early years, a lot of critics didn’t want to take KISS seriously as a rock band. Do you think there has been a big change in attitude toward KISS over the years?

Stanley: Time tells all. What has happened over time is that those critics and the naysayers and the people who were clueless to what we were doing, they realized that we were a pure rock and roll band. We didn’t add anything to hide what wasn’t there, but added to enhance what was there. Over time, the people on the streets became the critics and the executives. That’s part of our victory celebration. We have outlived the doubt and, in essence, taken over.

Q: Do any of the old songs have new meaning because of the success that you’re still experiencing?

For gallery of KISS photos, go to dailypress.com/ticket

Who: KISS with Def Leppard