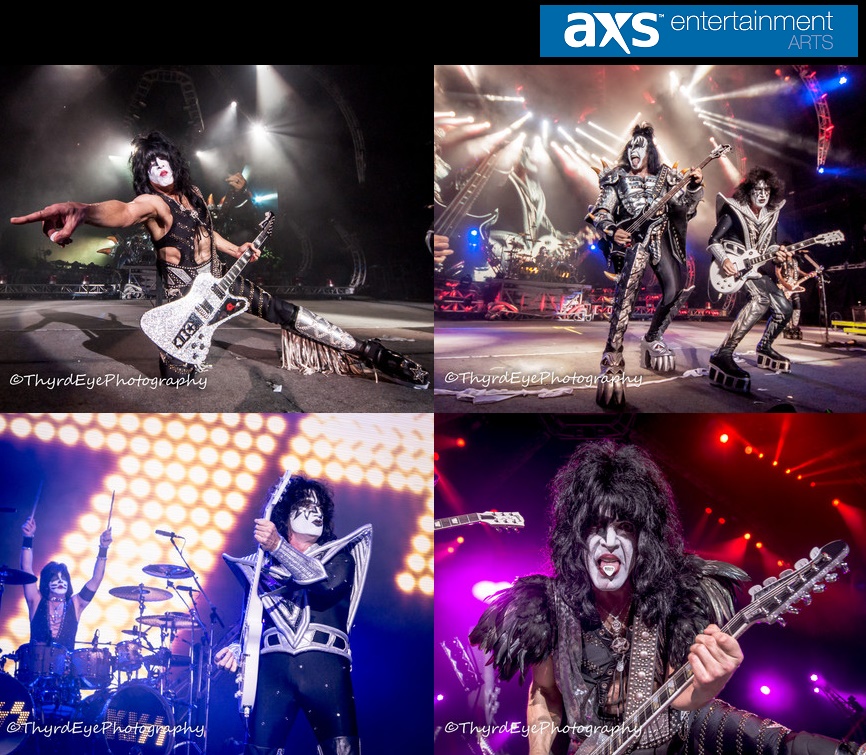 With the now famous phrase “You wanted the best, you got the best. The hottest band in the world…KISS!” the curtain dropped to a fiery opening as bassist Gene Simmons, and guitarists Paul Stanley and Tommy Thayer dropped down from the rafters riding a giant movable light rig that is in the shape of a spider to perform “Psycho Circus” on Thursday night at the Verizon Wireless Amphitheater in St. Louis.

With that the band that was recently inducted into the Rock and Roll Hall of Fame performed in front of a packed house of screaming rabid Kiss fans, also known as members of the Kiss Army. The Dead Daisies and Def Leppard opened the show.

Kiss has always been known for their over the top stage shows that keep fans interest glued to the stage with a spectacle of sight and sound.

Musically they sounded strong and tight, something that a band who is celebrating their 40th anniversary should be doing at this point.

KISS  hammed it up for the photographers and knew how to play to the audience. It was pure showmanship at its finest. Stanley reminisced with the crowd about playing at Forest park during the KSHE 95 Kite Fly in 1974, as well as The Checkerdome and Kiel Auditorium, playing to the crowd’s heart strings.

But the main theme was spectacle. For instance, in the middle of “Lick it Up” the giant spider light rig came down to the stage, enabling Stanley and Thayer to hop on and ride to the rafters while playing The Who’s “Won’t Get Fooled Again”.

Traditions at a Kiss show rule the roost. From Simmons’ fire breathing blood spitting bass routine to pyro spraying out of Thayer’s guitar and Eric Singer’s drum kit rising to the rafters, the fans eat it all up. Their motto for a Kiss show? “The bigger the better”. The rabid fandom that is the Kiss Army get vocally upset if the band tries to tone down anything or take away one of their signature shticks. To this end the band listens and reciprocates. Why wouldn’t they? With packed houses for every show why change a good thing?

Thursday’s show was packed with goodies for the fans. There was Simmons’ “flying” up 30 feet to sing “God of Thunder” from atop of the spider rig, and Stanley got a ride 15 feet above the crowd to a revolving satellite stage behind the soundboard in the middle of the house to perform “Love Gun”.

Say what you will about the band but a Kiss show is a spectacle in and of itself, a fun raucous party atmosphere that is like no other.

The Dead Daisies opened the show with a vibrant set from the band that features St. Louis native Richard Fortus who used to play in Guns ‘n Roses. Another GnR alumni Dizzy Reed is also a part of the band, as well as Thin Lizzy bassist Marco Mendoza along with Brian Tichey (drummer for Whitesnake, Billy Idol and Ozzy) and guitarist David Lowry and Jon Stevens on vocals. Touring in support of their self titled debut album. The band has been getting serious play on KSHE 95.

Def Leppard held the support slot with a 75 minute set that read as a greatest hits playlist. The highlight of their set was the infectious instrumental “Switch 625”.

Kiss Setlist:
Psycho Circus
Deuce
Shout It Out Loud
War Machine
Hotter Than Hell
I Love It Loud
Lick it Up (With snippet of The Who’s “Won’t Get Fooled Again”)
God of Thunder
Hide Your Heart
Dr. Love
Love Gun
Black Diamond (With intro of Led Zeppelin’s “Stairway to Heaven”)
Detroit Rock City
Rock and Roll All Night