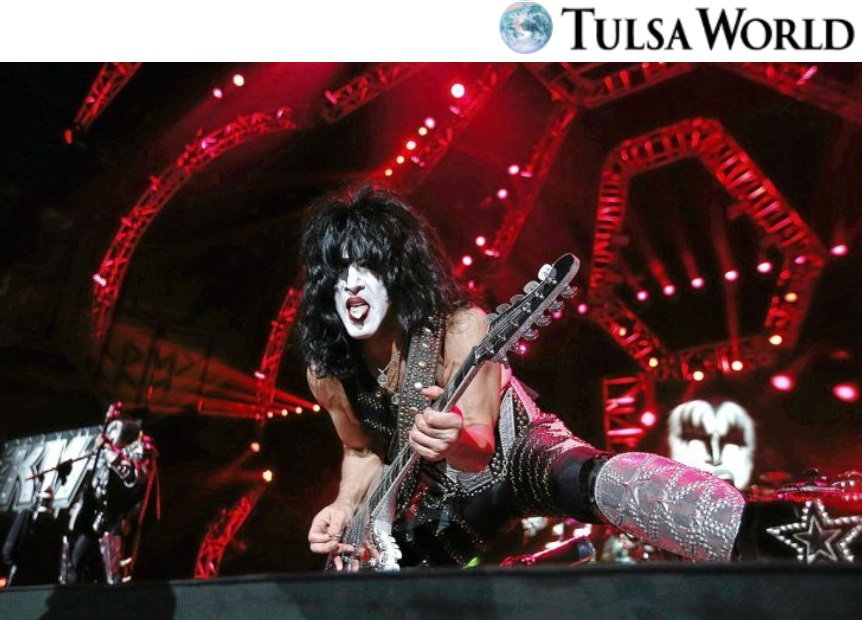 It was a double dose of headbanging rock and nostalgia at the BOK Center last night when Def Leppard joined the KISS Army for a fun, lively show, to say the least.

For those who have not seen a KISS show, it is a spectacle. It was my first time, and you hear stories, but the production, loud guitar riffs and energy were beyond all expectations.

Def Leppard started the double bill show (following a great opening set from The Dead Daisies). Their sound was strong, with impressive, long guitar solos from multiple members during crowd favorites like “Animal,” “Foolin,'” and “Rock of Ages” and “Pour Some Sugar on Me.”

It had that classic hard rock sound with the soaring guitar, basic vocal harmonies from the band members and pounding drum work, with drummer Rick Allen doing things most drummers with two arms could not do. Watching Allen work was very impressive and a thrill to watch.

Def Leppard showed several videos and photos from their early days as a band in the late 1970s and ’80s, which the crowd loved with the classic sounds of their youth. But, and the same goes for KISS, there were plenty of people who were not yet born when these bands were churning out hits and dominating radios. The nearly full arena cheered loud and hard throughout the shows.

Probably the loudest applause of the night came when Elliott said that $1 for each ticket sold throughout their entire summer tour would be donated to the Would Warriors Project, which aids those military members who were injured during the wars in Iraq and Afghanistan. They have been able to provide housing for a family already with the money raised for the tour, Elliott said.

An intermission gave stage hands time to assemble to spider-like stage for KISS while others unfurled banners that read “KISS ARMY” and “KISS” across the front of the stage.

The band members came down on top of the apparatus playing “Psycho Circus” and the crowd went nuts. It was intense and extreme, and an energy the band members — who were inducted into the Rock and Roll Hall of Fame this year — kept high throughout the show.

Screaming, electrifying guitar work and pulsing drums flooded the arena, with the solos from Tommy Thayer and Paul Stanley sometime literally lighting up the arena.

A song that didn’t include explosions, fire and flashing lights was an outlier. The pyrotechnics went off in a dazzling, bright explosion so often, especially at the beginning, that it seemed to double as a drum beat through the song.

How the performers were able to play, run and scream while wearing those elaborate and intense costumes is a mystery. After 40 years rocking hard across the world, the leaders of the KISS Army proved Friday night they still put on a show like none other.

While the guitar work was explosive, the vocals were drowned out at some points, though when the whole band sang together, it was clearer.

The glam rock transformed into a spectacle of nightmare glam rock when the one and only Gene Simmons blew fire, then on a dark stage spit blood and flew up to another platform, his deep, penetrating bass guitar shaking the arena.

Stanley also took off, flying around the arena for another step up in the spectacle.

KISS played their hits and crowd favorites, including “Shout it Out Loud,” “Lick it Up,” “God of Thunder,” “Detroit Rock City” and “Rock and Roll All Nite.”

If there was enough explosions in the building, I think the bands and the crowd would have loved to rock all night. After 40 years, KISS showed no signs of retiring from the KISS Army.