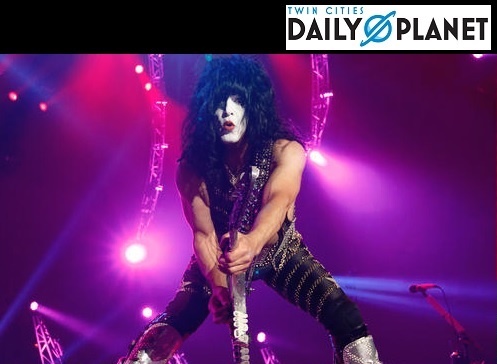 Excerpted from a review by By Caleb Baumgartner / TWIN CITIES DAILY PLANET
Photo By: Patrick Dunn

The entire band was on point for most of the show, blasting out absolutely rocking renditions of tracks like “War Machine,” “Dr Love,” and “Shout It Out Loud” amongst a slew of their other hits, while Paul Stanley played the near perfect, if maybe a bit cliched, frontman between songs. If a Rock and Roll Roboticist (which absolutely should be real thing someday, MIT get on that right now) was ever to create an android to be the perfect rock frontman, they wouldn’t need to do anything but replicate Stanley, whose smoothness and energy is something which really needs to be seen to be believed.

Love him or hate him, Gene Simmons is the perfect compliment to Stanley’s friendly, positive, energetic antics. Simmons still perfectly plays out his role as “The Demon,” still hitting the classic blood-and-fire spots in a way that feels oddly fresh and menacing even now after all these years. On stage and in makeup, Simmons is all id, a primal beast with an element of danger, a truly larger than life character which you cannot look away from. Without getting into Simmons the man, it is clear that Simmons the performer is still outstanding and very good at what he does.

Experiencing KISS live makes it very easy to see why they were recently inducted into the Rock and Roll Hall of Fame. They are truly larger than life, more brand than band, with an appeal that transcends generational lines due to the fact that they are more characters than humans. They are rock and roll turned up to 11 in a world where yes, 11 is louder, and no, you can’t just make 10 louder and have it stop at 10 like a normal volume knob, why would you even say that?

KISS definitely put on a memorable and enjoyable show that will likely stick with those in attendance for quite awhile.