SPAC GETS KISSED AND ROCKED! 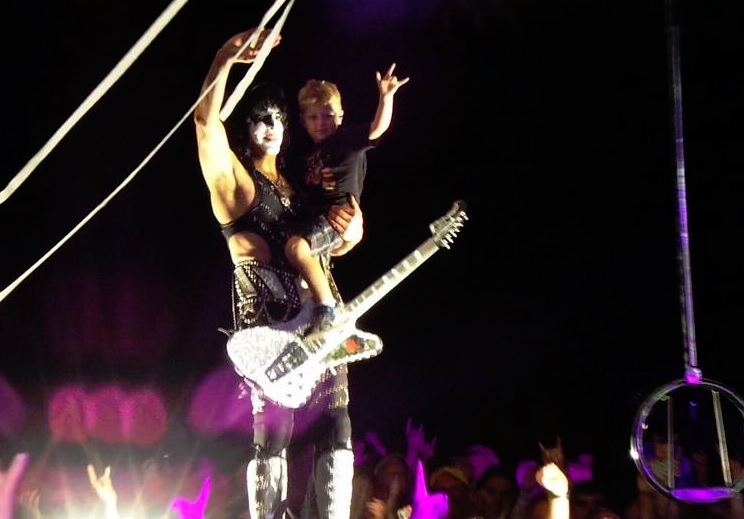 The Saratoga Performing Arts Center was rocked and KISSed Tuesday night as the 2014 Rock and Roll Hall of Fame inductees KISS headlined its 40th Anniversary Tour with another rock legend, Def Leppard who followed the Dead Daisies at the capacity show.

With the SPAC amphitheater, balcony and lawn area filled with a slew of fans donning KISS shirts, along with Starchild and Demon makeup; it was apparent early on that this was the Hall of Famer’s night in Saratoga Springs.

KISS, the creation of Gene Simmons and Paul Stanley opened the show to a frenzied crowd with “Psycho Circus” and followed Simmons with his deep growling rendition of “Deuce”. The media mogul let his rock persona flow front and center on the stage, ripping through his bass guitar and flashing his notorious tongue for the orchestra seat fans. His demon persona was brought up close the personal on the adjacent large video screens for all to see and scream in delight.

The front four of KISS, Simmons, Stanley, Tommy Thayer (The Spaceman) and Eric Singer (The Cat) were the focus for the 85-minute show, supported by the large full stage video screen behind the stage along with front dual screens on stage consistently rotating the KISS logo in various stages. Credit Simmons for never letting the crowd forget who was the headliner Tuesday night with that reminder.

It wouldn’t be a KISS show without pyrotechnics and explosions, all fired around drummer Singer throughout the night. With video screens being the rage, KISS brings the sound, fire and eruptions front and center.

Stanley worked the crowd between songs, asking the fans that had never been to a KISS concert to raise their hands for him. He guaranteed that it would be a night that they’ll never forget and the ageless rockers delivered.

Simmons continues to be the star of the show early on, spitting fire at the conclusion of “Hotter Than Hell” on stage and then bringing out his trademark battle axe bass guitar for his theatrical bass solo, complete with “blood” flowing out of his mouth and leading into “God of Thunder”.

Stanley worked the crowd, both back and front of the stage, singing at center stage or at stage left jamming during Simmons songs and showing his black satin and sequin studded backside to the audience.

After Simmons completed his rock love statement “Calling Dr. Love”, Stanley thrilled the crowd saying “Everyone deserves a front row seat, so I’m going to come to you.”

The KISS lead guitarist jumped on a pulley system and flew over the center seats of the amphitheater to the back of the inside seating to a rotating platform to sing “Love Gun” for the crowd, igniting devil horn finger salutes from the packed lawn crowd.

There was never any doubt that the show was for the crowd and Stanley thanked the capacity audience for their support in their Rock and Roll Hall of Fame induction. That thanks was never more evident than when Stanley reached down from his remote platform and brought up one of the youngest fans in the audience. The little boy waved to the crowd along with Stanley, sealing the deal in every fans heart.

After flying back to the main stage, drummer Eric Singer made his mark on the night with “Black Diamond” and finishing with his drum set raised high above the stage atop his intricate scissor lift.

Stanley again raised the fans appreciation, talking about ignoring the tradition of running off stage and encouraging the crowd to cheer them back for an encore. “We just want to play some more. Is that OK?”

The answer was a resounding ‘Yes,’ as the rock legends finished with their classic “Detroit Rock City” and “Rock and Roll All Night” completed with Stanley answering the cheers from the audience to smash his guitar on stage with white confetti spewing from air cannons deep in the amphitheater to close out the show.

The Hall of Fame show was set up by the return of a full-throated Joe Elliott leading stadium legends Def Leppard for a full 85-minute throwback show of 80s hits and ballads.

Last year, Elliott was suffering with a severe head cold during his SPAC performance, apologizing for his softer and shorter upper octave stints. He didn’t disappoint Tuesday night, returning in force and range.

The only new look on stage was a lockless co-lead guitarist Vivian Campbell, who’s dark, curly mane is gone after rounds of chemotherapy for Hodgkin’s lymphoma. His July 31 Facebook post states that his cancer is in remission, but he will undergo a third round of chemotherapy before a stem cell transplant when the tour ends.

The band that MTV come to life for fans in the 80s, Def Leppard continued to provide a rock and roll visual wow. Streaming video on the full stage rear screen along with four separate screens on stage along with the side jumbo screens in the amphitheater was perfect to remind the fans who grew up with Def Leppard how young we all used to look.

Hits like “Foolin” and “Let’s Get Rocked” were intertwined with ballads like “Love Bites” and the acoustic set of “Two Steps Behind” brought the 80s back to life.

The bare chested, vest wearing Phil Collen continues to be the one of the few 50-year-old plus rockers who can show off their body and licks in style with bassist Rick Savage never seeming to age.

Every Def Leppard fan is in awe when they see one-armed drumming icon Rick Allen, continuing to pound out the beat with arm, feet and of course, heart.

Def Leppard closed out the opening set with a triple-play of “Rocket,” “Armageddon It” and rock anthem “Pour Some Sugar on Me” before returning for its encore, playing “Rock of Ages” and “Photograph.”

While we all age, some memories are too strong to forget and Tuesday nights KISS/Def Leppard show proved that the 80s are alive and well in all of us in the seats and on the stage.