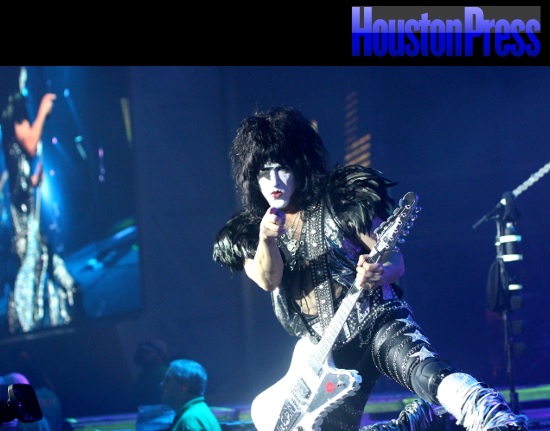 “Everybody’s got a front row seat tonight,” said KISS lead vocalist and guitarist Paul Stanley after recognizing fans on the distant lawn, “and just in case you didn’t realize it, you’re looking at a band onstage that’s in the Rock and Roll Hall of Fame!”

The crowd erupted with cheers, but Stanley barely let the applause sink in before moving on. After all, he was confined by a looming city-imposed curfew, and this was a KISS performance. There was much to be done.

Houston wanted the best, and it got the best. Sunday night, KISS concluded its 40th anniversary tour at a sold-out Cynthia Woods Mitchell Pavilion, where new and old fans alike basked in the glory that is “the greatest show on earth.”

“We couldn’t end the tour without coming to the rock and roll capital of this here Texas,” Stanley said. “We have been coming here for so long — we used to play the Summit. Matter of fact, we were coming here before some of you were born, so I know what to expect from y’all, so don’t play us cheap. Don’t let us down.”

Fans didn’t let up, and neither did the band. Stanley flew through the air, literally soaring over fans’ heads and outstretched fingertips to a rotating stage in the middle of the venue.

Gene Simmons, meanwhile, breathed fire and threw a burning sword into the ground before floating into the rafters. This, of course, was while the two were dressed as Starchild and The Demon, accompanied by Spaceman and Catman.

Fireworks exploded every few minutes, and flames rose high in the air, warming the fans standing in front of their seats. The evening’s soundtrack ranged from “Deuce,” from KISS’s 1974 debut album, all the way to “Psycho Circus” off their 18th studio album of the same name.

The quartet ended the evening with “Detroit Rock City” and “Rock and Roll All Night,” two classics that have been staples of their performances for years that still resonate with fans of all ages.

Put succinctly by a fellow concertgoer, “Kiss is a circus that every adult should see at least once in his or her lifetime.”

Def Leppard opened, taking the stage at 8 o’clock sharp after enticing the crowd with a countdown on the big screens on either side of the stage. Vocalist Joe Elliott emerged from behind the curtain donning a white jacket and a black sequined T-shirt, which looked about as hot as KISS’ high-flying pyrotechnics.

From opener “Let It Go” to “Pour Some Sugar on Me” and two encores, Def Leppard was as well-received as the makeup-donning quartet that closed out the evening. Percussionist Rick Allen brought the ruckus, reminding everyone that even the loss of a limb can’t keep a person from being a rock star if he or she wants it badly enough.