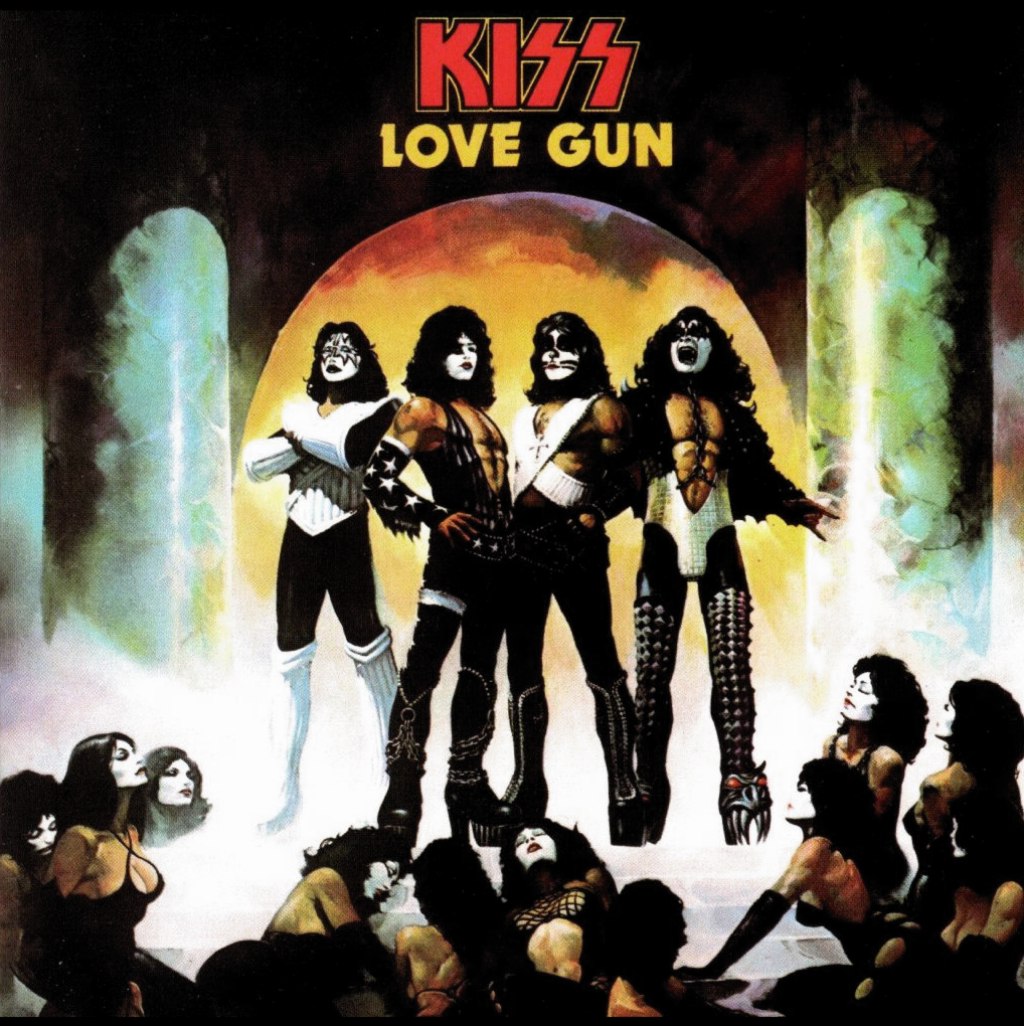 Legendary Rock and Roll Hall of Fame inductees KISS continue to celebrate their 40th anniversary with the release of a deluxe two-CD version of their 1977 platinum-plus album, Love Gun, coming out October 27, 2014 on Universal Music Enterprises (UMe). The band’s sixth studio recording, Love Gun was the first album to feature lead vocal performances from all four original band members, and has since gone on to sell more than four million copies.

The two-CD edition will include the complete re-mastered first album, featuring such classics as the title track, “Plaster Caster,” the song inspired by Cynthia Plaster Caster, the groupie famous for taking casts of rock star genitalia; “Shock Me,” written about Ace Frehley suffering an electric shock during a concert in Lakeland, Florida;  “Christine Sixteen,” and “Then She Kissed Me,” the band’s cheeky, gender-switching cover of the Crystals’ 1963 hit penned by Jeff Barry, Ellie Greenwich and Phil Spector.

The second disc is made up of rare, never released Love Gun demos of “Plaster Caster,” “Tomorrow and Tonight” and “Much Too Soon.”  The first four lines of the demo “I Know Who You Are” eventually evolved and became the song “Living In Sin” and the rest of the lyrics and music became “I Know Who You Are.” A glimpse into Paul Stanley’s creative process is demonstrated in “Love Gun (Teaching Demo)” with Stanley talking through the various chords of the song after writing the song.  The next version “Love Gun (Demo)” is the complete demo performance.  “Reputation,” the only previously released demo, was originally included on this year’s KISS 40 compilation.

Also included is a 1977  interview with Gene Simmons, as well as three never-available live tracks from their show at the Capitol Centre, Landover, MD from December 20, 1977, “Love Gun,” “Christine Sixteen” and “Shock Me.” The package comes with liner notes especially written by Def Leppard’s Joe Elliott, currently on tour with KISS.

With the culmination of the KISS 40th Anniversary Tour,  KISS marks their four decades as America’s most iconic band with their first-ever residency, KISS Rocks Vegas, at The Joint inside Hard Rock Hotel & Casino, a series of nine performances, starting Wednesday, Nov. 5 through Sunday, Nov. 23, including shows on Nov. 7, 8, 12, 14, 15, 19 and 22. KISS will make waves with one of the loudest, most over-the-top, non-stop parties ever at The Joint, unleashing its signature elaborate set designs, jam-packed set list, intense pyrotechnics and much more.

Gene Simmons and Paul Stanley also star in 4th and Loud, the new primetime docu-series from AMC, which chronicles the first season of the Arena Football League team L.A. KISS.