An Interview with Paul Stanley of KISS 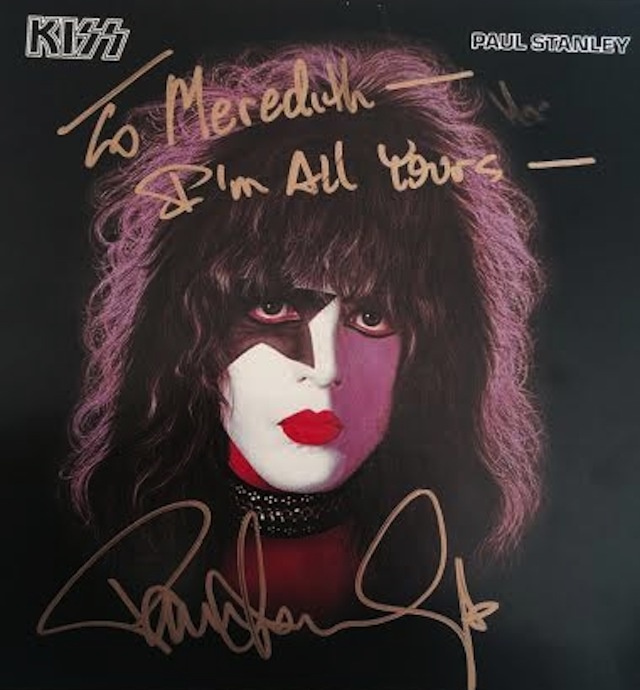 Check out our interview with the legendary Paul Stanley of KISS below.

Noisey: Why did you get this tattoo?
Paul Stanley: I made myself a promise, I said I’m going to get a tattoo. Never get two. Because as you know, it’s very hard to say no.

Especially in your situation, you can get free tattoos from the best tattooers in the world all over your body.
So we were staying at the Hyatt on Sunset. And Lyle Tuttle was across the street. And it just was burning, this desire. So I went across the street, I didn’t want a battleship. I just thought “I’ll get a rose.”

It makes sense, with all the androgyny in the costumes.
It was very simple, and then it was just a matter of keeping a promise to myself.

How has social media changed the band? I noticed you have one of the more prominent Twitters in the group.
I like to see there’s an edge to what I do on stage. Even my autobiography, the idea of communicating in a way that feels one on one, to the people who make me what I am. So I like to tweet multiple times a day, but not bullshit. I like to either share thoughts, or encouragement for other people, some of the things I’m doing. For me, I think it’s just another way to connect. I really enjoy fans. I really enjoy the people who make this all possible.

I’m 31 and look terrible. How do you stay in such good shape? I assume you eat nothing but kale and chicken and work out.
Honestly, genetically, I can’t take all the credit. My Dad’s 94.

He’s still with it, no problem?
My Dad throws a ball to my son. But I dance. I do a class with mainly women, which is really terrible. It’s called Cardio-Bar. And it’s a one-hour workout I do maybe four or five times a week. You’re doing the same thing everyday, and what you’re working on is your form. But it’s aerobically really challenging, and physically it gets you in great shape.

What is the worst job you’ve ever had? Before Kiss. Because obviously it doesn’t get better.
Everyone doesn’t wanna be president, but every president wants to be a rock star. I’ve got the job everybody wants. And it is as great as everybody says. It’s awesome.

The most depressing one I had for a very very short time was I worked in a factory, manually putting a magnetic bulletin board under a machine that punched a hole in it. I just did that all day and the fact that the other people there were missing fingers, it was not a great teller of the future. So I quit that one. I worked in a food service, appetizing store in Manhattan. My hair was really long so I had a terrible wig, which first of all gave me headaches. People would say “nice guy! Too bad he wears a wig.” So those were my two really worst jobs.

When you guys got that first KISS check, and thought you were millionaires before you were millionaires, what was the first meal that you went and ate? Where you were like “this is crazy but I can do it. I’m going to.” Do you remember what that meal was?
Yeah. That’s really interesting because it took a long time for my pallet to really expand; my parents introduced me to a lot of good food when I was a kid. Probably because my mom was German and my Dad is from European stock. They put much more emphasis on food. Food over here is like a break from work, you stuff your face. It’s fuel. In Europe, it certainly is a dining experience that you savor. I was exposed to a lot of food, but it really wasn’t until the last two decades – before then, going out and having a good steak was great. Still is. Going and having a great piece of pizza, a great hot dog is great. Anybody who limits his or her pallet is just missing the boat. Give me a great Foie Gras. But also give me a great piece of pizza. I mean how many hamburgers can you eat wrapped in lettuce. A friend of mine, a well-known chef, sends me food. Lots of it is really great. Rocco Dispirito. So Rocco sends me food every week that’s very very healthy. And there are dietetic desserts, and I want nothing to do with that. It’s like, if you’re gonna eat dessert, eat dessert. What the hell’s the point.

I know you were born with a birth defect of the ear (Microtia). You talk about the torment you endured as a result of it in your book, has there ever been an instance where you’ve seen an old childhood bully later on in life and you were just like – “you know what, you were an asshole, but now I’m Paul Stanley from KISS.”
I think that was certainly a motivation in the beginning. But I think, and what I hope people realize as they become successful, is that kind of recedes. The importance of revenge becomes much less important than enjoying your life. So I’ve never really had to face any of the people who were unkind to me. It’s very funny because a day doesn’t go by – yesterday I thought of an incident that happened when I was a kid.

Children are terrible. To each other they can be.
And adults can surprisingly be pretty merciless too. What’s interesting is you don’t forget those moments because that child in you never dies. So there are key moments in your life that may be unhappy, and they never recede into the past. So I thought I would enjoy pushing my success into peoples’ faces, but when I got the opportunity to, I found it was not only unnecessary but – unkind. It was unkind for me to push someone’s misery or my success into their face.

Is there current music that you like personally or are you just a jazz and blues guy, the opposite of what you’ve been exposed to for the past forty years.
Music is like food – there’s two kinds: good and bad.

What’s bad music?
I think that there’s a huge problem in that music nowadays that’s most available on the radio is mechanically produced, and interchangeable, and the people singing it really aren’t singers – they’re people that go into the studio and get auto-tuned. Look, I grew up going to Fillmore East, seeing Jimi Hendrix, Led Zeppelin, Humble Pie. Hendrix was like somebody from another planet. God bless Stevie Ray Vaughn, but there wouldn’t be a SRV without a Hendrix. And Hendrix was, it was so deep because it was so original, it crossed so many boundaries. There were no racial implications to what he was doing. He was just Jimi Hendrix. So he was very very dynamic and made a huge impression on me. I saw him twice. I was lucky because in New York I could see people play for 2000 people or less. The music today, my problem is if you don’t wanna sing a song, then get somebody else to sing it. Because it’s faceless and that’s the biggest problem I think now a days. Perhaps, I would hate to think, it’s because I’m getting older, but it’s a shame that a lot of young people are missing out on the excitement of music that is created by human beings. The reason we love so much of the music we grew up listening to is because it wasn’t perfect. What we’ve done is we replaced passion with perfection, and the music that I loved, Mo Town, was full of mistakes. The first Zeppelin album was a disaster, it’s brilliant because Jimmy almost goes off the rails at times. That’s what music is about. Music is about pushing the boundaries in search of ecstasy. And that’s missing today, for the most part. If somebody says, “what’s your favorite new band?” It’s The Foo Fighters [Laughs] He’s been doing this for what now, decades? I just don’t find a lot really does much for me, and if it does it’s because it reminds me of something else. And then I’d rather listen to that.