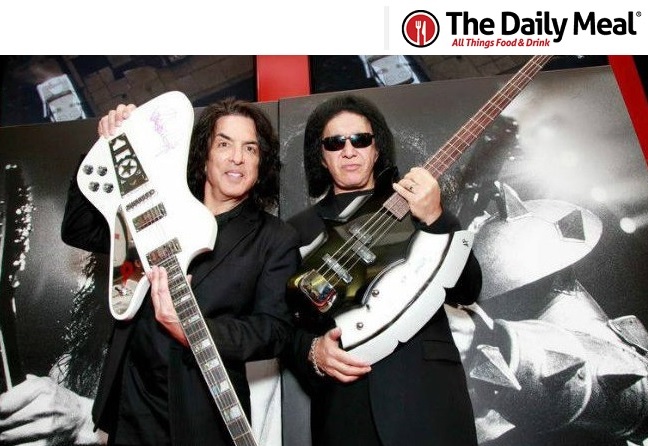 KISS’ Simmons and Stanley open up about the role food plays in their lives, what it was like growing up as New York City kids, and the successful expansion of their restaurant chain, Rock & Brews

They might be known for the glitz, the glamour, the in-your-face rock-star attitude, but Paul Stanley and Gene Simmons are simply sons of immigrants who grew up in New York City. That said, these guys know their stuff when it comes to food thanks to many years of traveling the world, trying different cuisines, and understanding new cultures. Stanley in particular has found a deep appreciation for cooking. His California home boasts a brick oven where he makes pizza and other creations for his family.

Stanley was born in the Inwood neighborhood of Manhattan in New York City to a German mother and a first-generation Polish father who made sure the family understood the value of a decent meal.

“They understood dining and savoring a good meal, which I learned at an early age,” he said. “I think to cheat your palate by limiting your foods is like cheating your ears by listening to bad music.”

The concept for the original Rock & Brews was a basic one: to create a fun atmosphere with great food and paid a tribute to rock and roll, Simmons said. And what better way to pay homage to the music they loved than to highlight micro and craft breweries to add to the overall essence of the restaurant?

“We want to remain consistent with what we do, but the Rock & Brews in Kansas is different than the one in Cabo. Our focus is local. There is local fare and local breweries that we incorporate onto our menus,” Stanley said. The menu also boasts gluten-free offerings, as they wanted to commit to serving the growing gluten-free community. “We didn’t want those with gluten intolerance to have cardboard mac and cheese. We wanted to circumvent that,” he said.

Simmons echoed his sentiments, noting they do not use any frozen products and use only the freshest beef for their signature hamburgers. Simmons takes pride in the restaurants’ layouts for being wide open spaces that encourage patrons to walk through their kitchens. “You can see our chefs tasting their own dishes. If it’s not good, they throw it out,” said Simmons.

The first Rock & Brews location opened in the picturesque beach community of El Segundo, California, just south of LAX, in April of 2012. Today there are restaurants in Redondo Beach, California; Los Cabos, Mexico; Paia, Maui; Overland Park, Kansas; and Oviedo, Florida, among others. The brand is also entering into the airport and arena concept as well. They currently operate in LAX and arena locations will be announced shortly, they noted.

The overall growth pattern is 25 percent a year and they plan to launch five new locations in 2015 domestically but also in Australia and Japan.

“The idea for the restaurant is certainly about the diversity of its locations, but it’s the quality of the food that keeps it all together,” said Stanley.

When asked when Rock & Brews will hang a shingle in their hometown of New York, Stanley said with a smile, “When the time is right.”