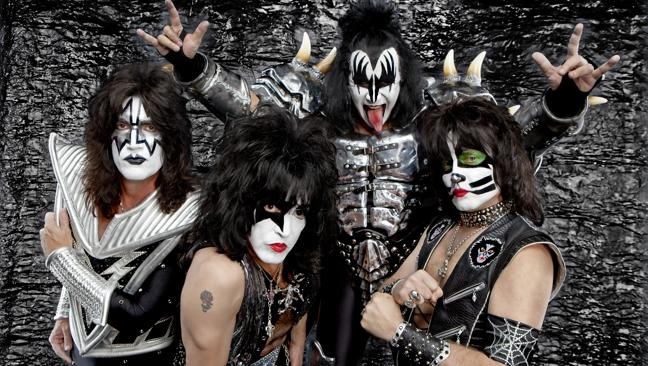 Not due to illness (it’s only happened once in 40 years) or simply taking a breather.

Rather Stanley believes Kiss is immortal and will continue on once he’s hung up the feathers, codpiece, jumpsuit, platform boots, big hair and Starchild make-up for good.

“I look forward to a day when I’ll see Kiss play without me,” Stanley says. “Don’t want to do it next week, haven’t penciled anything in, but it would be the culmination of what we’ve built and a consistent progression.”

The US rock band formed in 1973 and have survived several line-up changes due to ego, death and drama and weathered everything from low sales to high guitarists.

Frontman Stanley, 63, and Gene Simmons, 65, are the last two original men standing, but the singer insists everyone in Kiss is replaceable, even them.

“The people who said it had to be all the original members to be Kiss are already 50 per cent wrong. Do I cast a big shadow? Sure. But am I crazy enough to think I’m the only person who can do this? That would be ridiculous. Do you go to a Yankees ballgame and hold up a sign “Where’s Babe Ruth?’ The team continues because the ideal is met. The standard is met.

“If someone else can be a great frontman and reflect the philosophy of Kiss, it doesn’t have to be me. Is there someone else out there either in their teens or early 20s now who is going to pick up the torch? I’m sure there is.”

Stanley is the first to point out that an all-new rebooted Kiss would still be called Kiss.

“There’s no need to call it anything except Kiss. The idea that every time we change members we’re going to be Kiss 2.0, Kiss 2.1 is ridiculous. It’s Kiss. Kiss is a philosophy and a way of presenting music and presenting ourselves. If I say that the band can have personnel changes and still be Kiss, why would I exclude myself from that? I feel very strongly about it.”

The last decade has changed Stanley’s mind on his life in Kiss. It’s no longer his entire life like it used to be, rather just a facet of it.

The healthier mindset began with his second marriage in 2005 and having three children in five years, in addition to his oldest son, Evan, now 20.

“My life is wonderful,” Stanley says.

“There are so many performers and actors who don’t want to go home because they have nothing. Their lifeblood and oxygen is adulation and recognition and without that they wilt and wither. I see guys in other bands who have to be out on tour because they’re miserable without it. Well, roll up your sleeves and get a life. It will only enhance what you’re doing. At the end of the day it’s great to have people fantasise about who you are but at the end of the day you always have to face who you really are.”

Stanley did that last year by writing his refreshingly honest autobiography Face the Music, a candid book that wiped away more than the make-up

He documented an unhappy childhood, anti-Semitism in his own band and being so lonely he’d be eating soup in a deli alone just hours after playing a sold-out Madison Square Garden.

Yes, there was a string of ladies — including on Kiss’ first tour of Australia in 1980, where the band were so popular they were prisoners in their five-star hotel rooms. Except unlike actual prisoners, they had a string of Penthouse Pets providing a special kind of room service.

“I’ve always had a soft spot and a not-so-soft spot for Australian women,” Stanley jokes.

That makes him sound like his bandmate Gene Simmons, who skipped the usual rock star addiction to drugs for bedding thousands of women instead.

“I love women,” Stanley says. “But the idea of having intimacy with a woman is totally contradicted by putting it out in the press. Publicity is an betrayal of intimacy.”

And while he’s no stranger to the perks of mammoth, global fame, he also remained aware of the aphrodisiac power of being a rock star.

“For a fat, unpopular kid with one ear to look up at the mirror on the ceiling and see the Playmate of the Month … I mean, pinch me,” Stanley says.

CLICK HERE to read the rest of the story at www.news.com.au