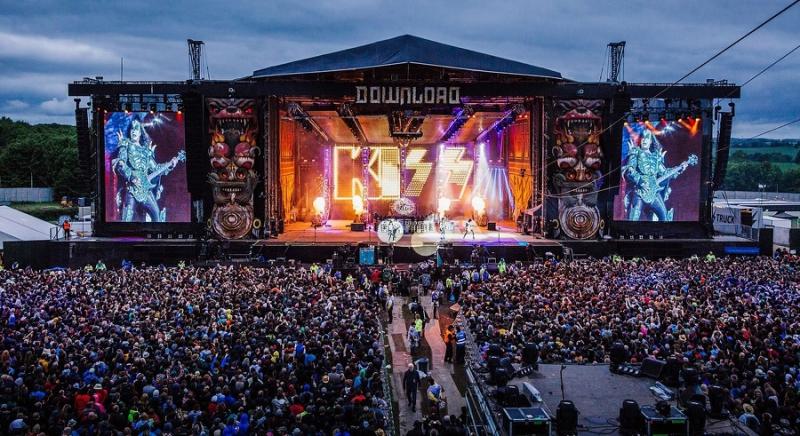 American rockers KISS arrived in a blaze of fire clouds, plumes of smoke with enough energy to launch Donington Park into the stratosphere.

DOWNLOAD wanted the best… and they got the best!

American rockers KISS arrived in a blaze of fire clouds, plumes of smoke with enough energy to launch Donington Park into the stratosphere.

The three-day festival saw more than 80,000 revellers descend onto the sacred rock grounds of Donington Park in Castle Donington to hear hundreds of bands over four stages.

But it was closing act KISS which lifted the crowd’s spirits after almost two solid days of drizzly weather conditions.

Tongue-wagging bassist Gene Simmons spat blood, threw a burning sword into an amp, and teased the crowd with his axe-shaped instrument.

Enthusiast front man Paul Stanley bellowed out classic hits such as Creatures of the Night, Psycho Circus and Detroit Rock City and even zip wired across the arena to a special podium for a fire-work spectacular during classic 70s hit Love Gun.

Guitarist Tommy Thaylor, who adorned the spaceman outfit in 2002, previously occupied by Ace Frehley, who was also at the festival promoting his solo material, delivered rapid guitar riffs while firing flares from the end of his axe.

And Eric Singer seemed to have more drum toms than any other act to play Download!

KISS sounded harder, and heavier than ever, even making new anthems such as Hell or Hallelujah from their last album, Monster, feel like classic rock numbers.

And they were joined by one hell of a line-up on the Sunday, which could have been penned as

Motley Crue fired through hits such as Live Wire, Girls, Girls, Girls and Too Young to Fall in Love as part of their last ever UK festival appearance.

And guitarist Mick Mar’s certainly wanted to go out with a bang, attaching a flame thrower to the end of his guitar for Shout at the Devil.

Other acts that lit up the main stage was Slash with Myles Kennedy and The Conspirators.

While Slash is a man of little words, his instrument definitely did the talking as he and his crew gave Download what they needed – a trip down memory lane.

The festival also saw a special appearance by The Darkness, who turned out, under a veil of secrecy, to perform on the Maverick Stage.

Other acts that played the three-day festival included Marilyn Manson, who used some of the set to celebrate Bodycount’s Ice T, even hauling the rapper up on stage.

He played through a back catalogue of hits including Dope Show, Disposable Teens, and his classic Eurythmics cover of Sweet Dreams, but very little from his acclaimed new album The Pale Emperor.

He told the crowd: “I have sunglasses on because I can’t stand the brightness of your greatness,” before launching into his bible-bashing antics on Cruci-Fiction in Space.

Faith No More brought out the sunshine with a flower display that could have won awards at the Chelsea Flower Show.

Dressed in white shawls, and surrounded by flowers, lead singer Mike Patton announced himself as the crowd’s yoga instructor before launching into a beautiful and mixed set of hard and soft numbers, dripping in funk, including Epic, Evidence, Easy and We Care A Lot.

Other bands on the three day festival included Slipknot, Muse, Judas Priest (arriving at the main stage on the back of a motorbike), Andrew WK, L7, Blackberry Smoke (definitely one to watch), Five Finger Death Punch, Funeral for a Friend and Billy Idol.

And while the elements might have been battering at Download’s door, this didn’t stop the droves of metal and hard rock fans from having a ruddy, or should that be muddy, good time.

But overall, it was KISS that stole Download 2015 – and nothing said ‘rock n’ roll’ more elaborately than watching Simmons and Thaylor hover across the crowd on giant mechanical space pads to festival closure Rock N Roll All Nite while the audience is blasted with silly string and paper confetti. True rock legends!