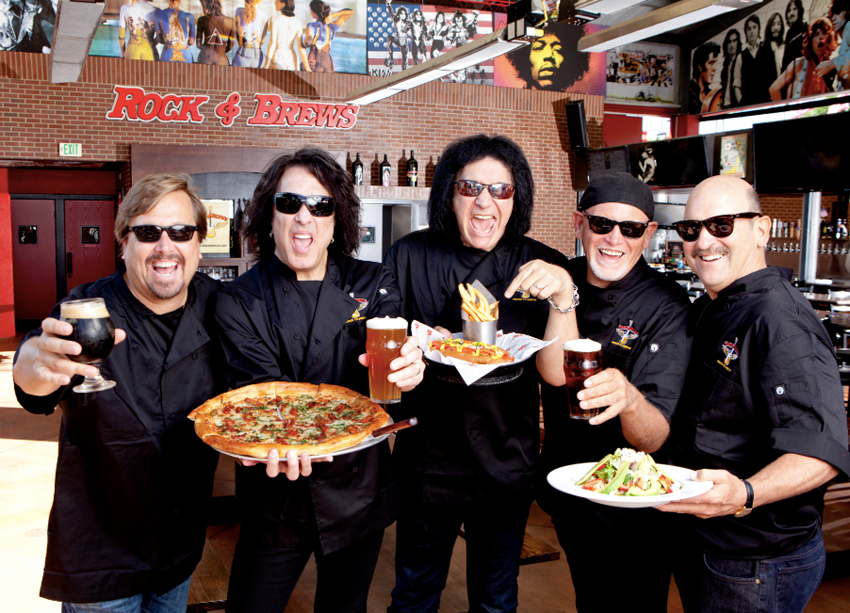 Rock & Brews may have been founded by music industry veterans, including two rock stars, but the concept is not a theme restaurant for headbangers.

“We’re not the tourist, Hard Rock, Planet Hollywood kind of concept,” said Rock & Brews CEO Michael Reynolds, who managed the bands Missing Persons and Night Ranger in the 1980s. “We’re much more of the family restaurant kind of place … where the kids have something to do in the play area and the wife can have a glass of wine with her girlfriends and the guys can watch a game and drink a beer.”

The 11-unit casual-dining concept was founded in El Segundo, Calif., in April 2012, by restaurateur and hotel operator Michael Zislis, concert industry and merchandizing veterans Dave Furano and Dell Furano, and Paul Stanley and Gene Simmons of the rock band KISS.

Simmons said Dell Furano approached him about the concept. Furano had worked with Kiss on licensing and merchandising before getting into the restaurant business.

“We started talking about the culture of [restaurants],” Simmons said. “I mean, you don’t have to go out to eat. You can stay home, watch TV — and this happened a long time ago with TV dinners. … So why go out? Well, we’re social animals. We like to share good times with other people. It’s not just food; it’s the company you keep, whether it’s family or you’re out to find a beautiful girl, whatever it is, you want to be outside [your home]. So you want to mix food and drink and people.”

“You’ll see the walls [at Rock & Brews] covered with rock stars, and videos playing — Queen videos and ACDC videos — so you’re sort of surrounded by the culture you grew up with,” Simmons said. “And you can bring your kids. … And most of our sites you can bring your dog.”

Restaurants with patios are dog friendly, and Reynolds said many customers bring their pets with them.

The menu was developed by Zislis’ restaurant group, which operates the two Shade hotels, two Rock’N Fish restaurants and The Strand House restaurant, all in the Los Angeles area.

“People come in thinking beer and wings and kind of that app food, and they’re really pleased to find that we have phenomenal ribs, chicken, pizzas and salads,” Reynolds said.

He is now working with talent manager Shep Gordon, who has worked with rock stars and celebrity chefs such as Emeril Lagasse to create rock-star themed menu items.

“We’re in the process of doing a really cool collaboration with Gene [Simmons] and a potentially well known chef called The Demon Burger — Gene’s known as The Demon — where we’ll do a really spicy burger,” Reynolds said.

He also said the restaurant is looking to work with chef Roy Choi, of the Kogi BBQ Taco Truck, to collaborate with Stanley on a Starchild Pizza, named after Stanley’s persona in Kiss.

Restaurants have 52 craft beers on tap, with 10 percent of from local brewers in each market.

Similarly, about 20 percent of the menu is adjusted to suit local tastes, with different barbecue sauces used in different locales, tri-tip sandwiches in southern California, and green chile available on the macaroni and cheese and pizza in Albuquerque. The music varies, too.

“We’re not a Kiss restaurant; we’re a classic rock restaurant. We love our association with the guys, but if it makes sense to do a deal in Detroit and Kid Rock wants to be a part of it, we’re very open to that.”

Simmons said it’s important for different locales to reflect the needs of their customers.

“At the LAX Delta terminal Rock & Brews, we have 10 things on the menu that are under 10 bucks that you get in under 10 minutes,” he said. “If you don’t get it in time or you don’t like it, you don’t pay for it, because what the LAX site is aware of is, you’ve got to catch a plane, and you don’t want to bother with the muss and fuss, and you want it to be good and value for your money, but you don’t want to miss your flight.

“But in Maui, it’s very easygoing, and people chat and like to drink and sit around for hours, so that’s the vibe there.”

Rock & Brews is currently on a growth spurt, with locations slated to open in Buena Park, Calif., in August; Oklahoma City in September; and a second location at Los Angeles International Airport, in Terminal 1, in November. Reynolds expects the Dallas location and at least one other restaurant to open this year, too. He projected growth of about 25 percent annually going forward.

Negotiations also are under way for multi-unit deals in Canada, Australia and New Zealand.

“It’s growing exponentially, which is a big word, like ‘gymnasium,’” Simmons said.

Rock & Brews also participates in charity efforts. Each restaurant invites local wounded veterans to the restaurant on opening day and presents the local veterans’ organization with a donation.

“You can Google it,” Simmons said. “Put in ‘Redondo Beach’, ‘Rock & Brews’, ‘wounded warriors.’ You’ll see photos, packed house, people toasting, having the time of their lives. After they served us, why can’t we serve them?”