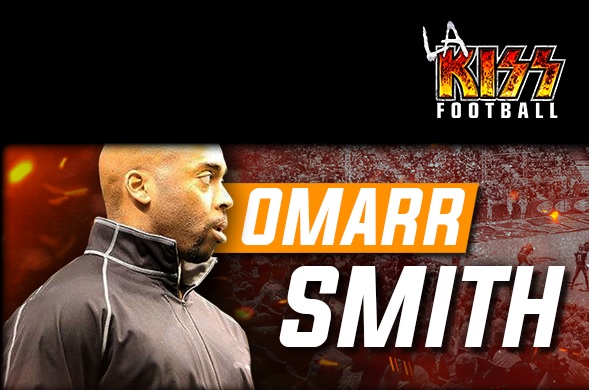 The LA KISS announced today that Omarr Smith has officially been named Head Coach. Smith was previously assistant Head Coach of the ArenaBowl Champion San Jose SaberCats. This will be his fifteenth year in the Arena Football League (AFL) and is tied with the late Coach Tim Marcum with 7 ArenaBowl championships.

“I am honored and humbled to be named the Head Coach of the LA KISS,” said Omarr Smith.  “I knew that it would take a unique opportunity to leave a top notch organization such as the San Jose Sabercats, and that is clearly how I look at this situation. The LA KISS represents many of the values that I embrace as a head coach; the dedicated pursuit of excellence, the commitment to the team over oneself, and providing an entertaining brand of football.”

A native of Torrance, California, Smith attended Bishop Montgomery High School and earned all-league honors in football, basketball and track. His skills earned him a football scholarship to San Jose State University where he played all four years. After graduating from San Jose State, Smith joined the AFL where he was a key part to three championship seasons with the San Jose SaberCats in 2002, 2004 and 2007. He was also with the Tampa Bay Storm during their championship season in 2003. Smith’s famed career ended after his 9th season in the AFL. He tallied an impressive 35 interceptions, 88 pass breakups and 8 defensive touchdowns.

“We are very excited that Omarr is going to be the new Head Coach of the LA KISS Football Team,” said Joe Windham, CEO of the LA KISS. “We worked together for 3 years in Arizona and experienced a lot of success together. Omarr has accomplished a lot in the AFL from being a player, a hall of fame inductee, to an Assistant Head Coach, and it was a natural decision to select him as our new Head Coach. His record as a player and a coach speaks for itself and we can’t wait to get the 3rd season of LA KISS Football going.”

Smith brings seven years of coaching experience to the LA KISS. He spent the last two years with the San Jose SaberCats, as assistant Head Coach, winning the ArenaBowl again in 2015. Prior to the SaberCats, he served as the defensive coordinator for the Arizona Rattlers, where his defense surrendered the second least points per game from 2011-2013 and won the ArenaBowl in both 2012 and 2013.

“It is of course bittersweet as the San Jose Sabercats will always hold a very special place in my heart and in my family’s,” said Omarr Smith, head coach of the LA KISS. “I’ve had the good fortune of working with the some of the best players, coaches, and people this league has to offer.  I’ll be forever grateful and thankful for the opportunity to have played and coached for that organization. I am eagerly looking forward to this wonderful opportunity to return to the place where I was raised, to lead the LA KISS football program to the next level. I especially would like to thank Paul Stanley, Gene Simmons, Doc McGhee and Joe Windham for affording me this great opportunity.”

For more information about the LA KISS and this announcement, please visit lakissfootball.com.

Gene Simmons and Paul Stanley, two of the greatest showmen of all time, brought pro football to Los Angeles with the formation of LA KISS Football. In just one year, LA KISS has become a phenomenon by taking the KISS mentality and applying it to a sports team. LA KISS represents the fusion of entertainment and sports like no other brand and delivers an all-encompassing in-game experience that is second to none. LA KISS ownership combines over 40 years of success in both entertainment, sports and business. The leadership team looks to challenge and redefine the term “sports entertainment” by applying the KISS mindset to everything they do. For more information, visit lakissfootball.com or follow the team on Facebook, Twitter or Instagram.