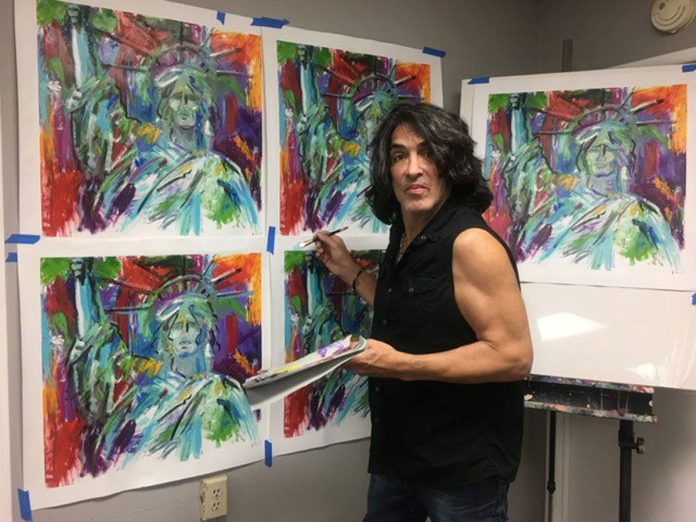 Stanley designed and created the iconic KISS logo which remains universally recognized as one of the greatest logos of the 20th century. His artistic and visual input has been and continues to be seen in his designs of KISS album covers, performance stages and apparel.

Stanley returned to his passion for painting ten years ago by creating portraits and abstracts that are emotionally charged compositions. His tremendous success with his artwork has led to an entirely new fan and media presence for the accomplished musician, actor and artist. He maximizes the direct and powerful impact of his paintings through scale, texture, color and simplicity of imagery and has been commissioned to create large works to be displayed internationally.

For more than thirty years, Paul Stanley has reigned supreme as one of the single-most recognizable front men in the history of rock and roll. Although preferring to live his off stage life out of the media spotlight, he continues to be the chief songwriter, driving force and the unwavering voice of KISS. A visionary and trendsetter since the early 1970s, Stanley’s passion for both the musical and visual arts has perhaps been the key to the astonishing ongoing worldwide phenomenon known as KISS. Stanley single-handedly penned such escapist anthems as “Love Gun”, “God Of Thunder” and “Black Diamond” and wrote the golden throat that throttled “Detroit Rock City,” the charismatic swagger behind “I Was Made For Lovin’ You,” and stripped of makeup, was the unmasked troubadour that breathed vocal life into the ballads “Reason to Live,” “Forever” and “Every Time I Look At You.”

In addition to the concert stage, Stanley has also played to theatrical audiences in the title role of The Phantom, in “The Phantom of the Opera.” Paul was chosen to be the final Phantom in the 10 year run of the Toronto production.

As an accomplished solo performer, Stanley released “Live to Win”, his first solo album in more than 25 years. In it, Stanley strips his emotions to the bone and adorns them with a melodic sheen with songs about the power of the human spirit and commitment to not compromising ideals. In 2008, Stanley released the heavily awaited concert DVD, “One Live Kiss,” that quickly went to the top of the music video charts.

Stanley’s works have been praised by well-known and distinguished art concerns and acquired by fans, celebrities and art collectors.

For more information about this event, contact the gallery via email at towncenter@wentworthgallery.com or to reach the gallery directly and RSVP, call 561.338.0804