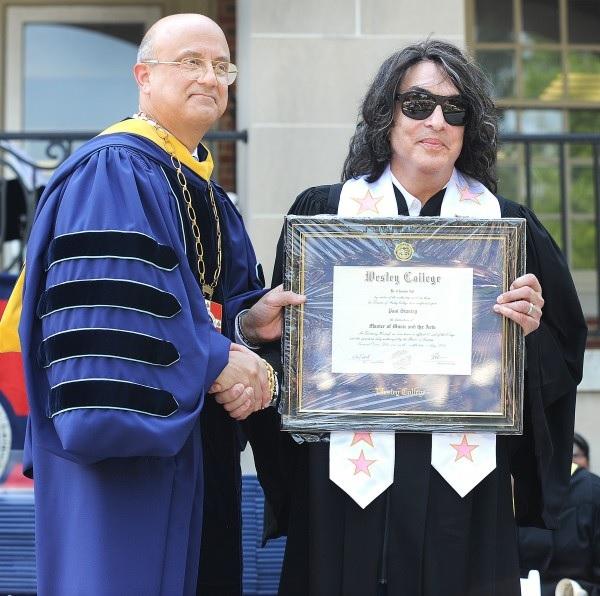 DOVER — As Wesley College graduation commencement speaker, KISS front-man Paul Staney eschewed “smoke machines, lasers, electric guitars and makeup” for the occasion. He jokingly said it was due to a deal he made with college staff to behave.

Instead, he shared some advice with the outgoing class of 2018.

“Make the most of your life and be proud of what you do,” he said during his commencement speech. “Make sure at the end of the day, you can look at yourselves in the mirror and like who you see. Go forward, have a great life and remember that even on its worst day — and I’ve had my share — life is a miracle. Go out and prosper. Make this a better world, you can do it. And, take some time to rock ’n’ roll too.”

Mr. Stanley, who’s also an author, entrepreneur and philanthropist, shared stories of how fighting against adversity in his own life pushed him to succeed.

Born with microtia — a congenital deformity resulting in an underdeveloped ear — he said he was ridiculed as a young child and later mocked for his desire to pursue music.

“I’m deaf on my right side and have no ear canal — I didn’t have an ear on that side,” Mr. Stanley said. “People asked, how can you go into music? But, I’ve always said that you have to innately know what you’re capable of doing, no matter what anyone tells you. People say that those who are successful are lucky. It’s not luck. People who are successful look at situations and see opportunities others missed. The people who tell you it’s just luck are the ones who didn’t succeed. It’s a rationale for their failure. Don’t be one of those people.”

Rousing the graduates, Mr. Stanley urged them to put hard work and drive behind whatever they hope to accomplish.

“My background is probably very different than yours, but I think I’m proof that regardless of the field you choose to go into, success comes from the fundamentals: hard work, tenacity and believing in yourself,” he said. “If you can dream and you can work hard, you can make the dream into a reality.

You’re the masters of destiny. The only thing standing between you and success is hard work.”

Making remarks for the senior class, graduate and Student Government Association president Betty Lee also shared a story of overcoming adversity and celebrated the life of a classmate who died.

“While we celebrate today, I’d also like to take a moment to celebrate the life of a Wolverine (Wesley’s sports mascot) who’s no longer with us,” said Ms. Lee. “Brittany Paige died my freshman year. After her death, I continued to find little notes she’d written for me and tucked among my nursing textbooks and my notebooks. Each note told me to ‘keep going’ and that I am ‘beautiful’ and I could ‘do it’ and that I am ‘strong.’ If Brittany were here today, she’d be all our biggest fan. On the one-year anniversary of Brittany’s death, I got to spend the day with her parents and they gave me the best advice I was even given. They told me to tell my parents that I loved them as often as I can. At the end of the day that’s all that really matters.”

The 19-year-old Ms. Paige was killed in early 2015 after being hit by a car while jogging several blocks from the school, reported Dover Police.

Many hundreds of well-wishers, proud family members and friends joined the graduating students on the lawn of Wesley College campus in Dover during the outdoor ceremony. Several politicians and dignitaries, including U.S. Sen. Thomas Carper, joined the celebration.

With temperatures in the low 80s and plentiful sunlight, the weather was an improvement from previous years.

“This is the first time in two years without rain, so this is already a good sign,” said college president Robert Clark II during his speech.

As other speakers did, Mr. Clark encouraged graduates to face down adversity.

“I challenge each and every one of you to work hard toward the realization of your potential,” he said. “Don’t waste it. Face, head on, the challenges your class will encounter and overcome them. Embrace what the future holds by being an active part of it.”

During the ceremony, Mr. Clark also took the opportunity to mark and honor the retirement of two professors: Nancy Rubino and John Paul Muczko.