A KISS goodbye: A Q&A with Paul Stanley 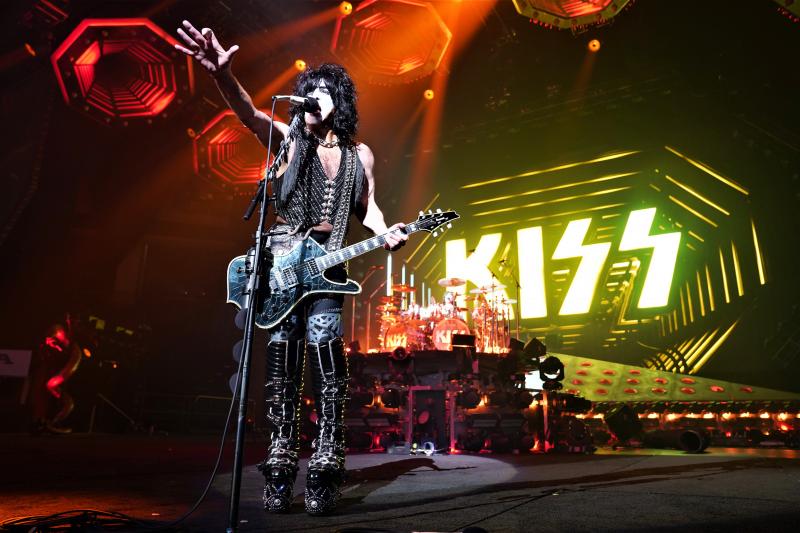 They’ve shown us everything they’ve got, kept us dancing while the room got hot. They’ve driven us wild, we’ve driven them crazy. KISS has taken us for a spin, but now the party’s winding down, and for one last time, they’re letting us in: The legendary hard rockers play John Paul Jones Arena Friday, on their End of the Road World Tour.

In advance of the show, we spoke with band co-founder and “Black Diamond” and “Detroit Rock City” songwriter Paul Stanley—aka The Starchild—about 40-plus years of rocking and rolling all night, his makeup removal routine, fan stories that rock his world, and whether or not this really is the end of the road for the band.

C-VILLE: This is your last tour. What song will you be happy to never play again?

Paul Stanley: I’m thrilled with every song we play. My point of view is, if you’re tired of playing a song, it’s probably not a good song. Some of these songs come from 45 years ago, or even longer, and they’ve stood the test of time because they’re that good. And for me to not give them the respect that they deserve, would be me being undeserving of those songs. I’m thrilled to play “Rock & Roll All Nite.” I’m thrilled to play “Love Gun.” I’m thrilled to play “God of Thunder,” “Detroit Rock City,” and on and on and on. So, those songs are rallying cries for us and our audience. Our connection to our audience is so strong because we never lose sight of wanting to please them. And on this final tour, this is the ultimate KISS show. It’s bombastic. It’s over two hours of all the songs you want to hear. It’s a unique opportunity to know that this is the last time. Many times in life, we all find ourselves losing someone, or losing something, and saying, “If I had only known, I would have done something different.” Well, instead of going out with a whimper, we’re going out with a bang! And this is a victory lap where we all get together—because it’s like a congregation of everyone cheering for what we’ve accomplished. And by “we,” I mean us and the fans.

What song will you most miss playing?

I love ’em all. And again, it’s important to note that this is the end of touring. The band isn’t necessarily disappearing into thin air. It’s just reached a time where touring, and doing 100 shows in seven months, which is what we’ve done so far, is just…it’s just too demanding and time-consuming, when there’s other things to do in life.

The band put together a book of official KISS memorabilia (KISS: The Hottest Brand in the Land)…but I’m curious, what’s the coolest or most bizarre piece of fan-made KISS swag you’ve seen?

Oh my gosh! That’s an interesting question. I don’t know that off the top of my head, that I can come out with a particular piece. But, I’m always just taken by how many people I get to meet who tell me that KISS was instrumental in them becoming lawyers, doctors, getting off drugs, staying out of prison, the list goes on and on—becoming a famous musician. The fact that we can serve as inspiration without preaching, is probably the most powerful way you can influence somebody, [and that’s done] by leading by example. And we’ve always done that, by not being limited by the boundaries or limitations of other bands. When we started this band out, we were facing incredible odds, but, you find out how much something is worth to you by how hard you’re willing to work for it. So, hard work is how you achieve things. If you think you’re just going to win the lottery, the chances of that are slim and none.

I think it’s Dermalogic. It’s better than sandpaper, that’s for sure.

KISS did a farewell tour 20 years ago [ed. note: with the original lineup of Stanley, Gene Simmons, Ace Frehley, and Peter Criss]. Why should we believe you this time?

Well, because the writing’s on the wall: We’re 20 years older, for starters. And secondly, the first time we did a farewell tour, it was ill-conceived. The idea that we should let two members who were making us—meaning Gene and I—miserable, and compromising the band, shouldn’t be a reason for calling it quits. We have always believed that the band is bigger and stronger than any individual members, and we suddenly got caught up in the idea of putting the horse down instead of just getting rid of a couple of the jockeys.

Has your costume ever gotten in your way of shredding a sick riff? I imagine that studs and sequins and chest hair don’t exactly mix. And then you add platform shoes….

You know, I have to say, if you complain about any of the above, then it’s like complaining about taxes when you win the grand sweepstakes. I won, and I have no complaints.