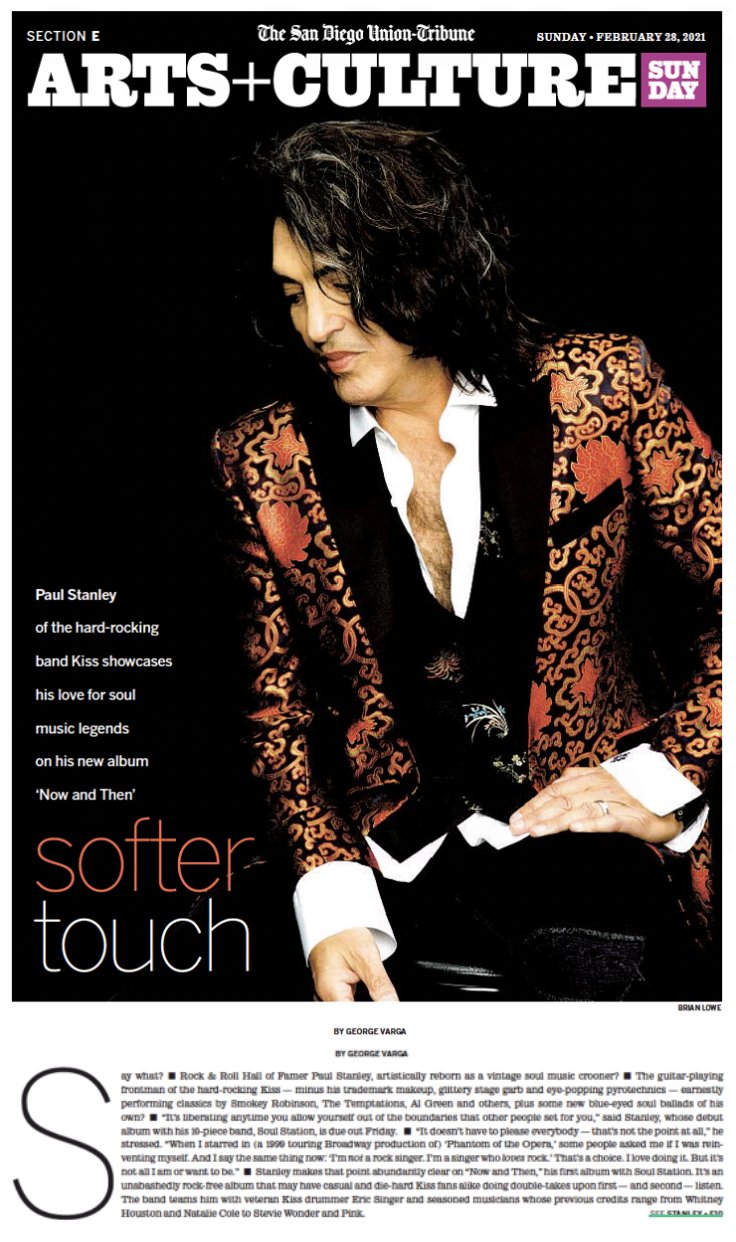 No makeup, no glitter, no guitar: The front man of Kiss showcases his love for Smokey Robinson, The Temptations and other soul legends on ‘Now and Then’

The guitar-playing front man of the hard-rocking Kiss — minus his trademark makeup, glittery stage garb and eye-popping pyrotechnics — earnestly performing classics by Smokey Robinson, The Temptations, Al Green and others, plus some new blue-eyed soul ballads of his own?

“It’s liberating anytime you allow yourself out of the boundaries that other people set for you,” said Stanley, whose debut album with his 10-piece band, Soul Station, is due out March 19, after being pushed back from its March 5 release date.

“It doesn’t have to please everybody — that’s not the point at all,” he stressed. “When I starred in (a 1999 touring Broadway production of) ‘Phantom of the Opera,’ some people asked me if I was reinventing myself. And I say the same thing now: ‘I’m not a rock singer. I’m a singer who loves rock.’ That’s a choice. I love doing it. But it’s not all I am or want to be.”

Stanley makes that point abundantly clear on “Now and Then,” his first album with Soul Station. It’s an unabashedly rock-free album that may have casual and diehard Kiss fans alike doing double-takes upon first — and second — listen. The band teams him with veteran Kiss drummer Eric Singer and seasoned musicians whose previous credits range from Whitney Houston and Natalie Cole to Stevie Wonder and Pink.

Released by UMe, “Now and Then” features four new ballads, including “I Do” and “I, Oh I,” that Stanley wrote for the album. All four were inspired by his love for many of the timeless records released during the 1960s and ‘70s heyday of Motown, Stax-Volt and Philadelphia International Records.

Records like, specifically, The Stylistics’ “You Are Everything,” The Delfonics’ “La-La Means I Love You,” The Spinners’ “Could It Be I’m Falling in Love,” Al Green’s “Let’s Stay Together,” and The Temptations “Just My Imagination (Running Away With Me)” — to cite five numbers devotedly performed by Stanley on his band’s new album.

Each of these songs are silky, joyous odes to the power of love.

CLICK HERE to read the rest of the story!