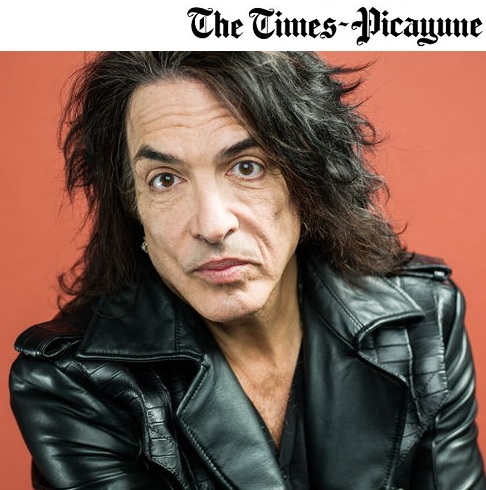 KISS frontman Paul Stanley exposes all sides of himself in frank, comprehensive autobiography

By Keith Spera, NOLA.com | The Times-Picayune

On paper at least, Stanley Bert Eisen, a working class Jewish kid from Queens, was an unlikely candidate for rock ‘n’ roll stardom — and not just because of his aggressively un-rock ‘n’ roll name. He also was born with a stump for a right ear. Beyond rendering him deaf on that side, the deformity caused enormous psychological damage. Coupled with a dysfunctional family, it made for a difficult childhood.

A quest to compensate for the resultant emotional void largely explains Eisen’s relentless drive to reinvent himself. With his face covered in makeup and his deformed ear hidden by a mass of curls, he morphed into Paul Stanley, the strutting, supremely confident Starchild of Kiss.

Stanley’s lifelong struggle to reconcile his two selves — the wounded, insecure, lonely man-child and the larger-than-life rock star — is the underlying theme of “Face the Music: A Life Exposed” (HarperCollins), his recent autobiography. Much more than a collection of tawdry anecdotes, “Face the Music” is an up-by-the-bootstraps narrative and a search for identity, set in the anything-goes world of 1970s and ’80s arena rock.

Stanley methodically peels away the Kiss mystique to matter-of-factly reveal the forces at work behind the music. He is the last of the original four members of Kiss to pen an autobiography. His may well be the authoritative account.

While this is Stanley’s story, the book is laden with intimate band details. The tale of how he, bassist Gene Simmons, guitarist Ace Frehley and drummer Peter Criss built Kiss into an international band and brand is a classic American success story. In the early years, an us-against-the-world mentality prevailed. Locker room hijinks abounded; I’ll leave it to readers to learn for themselves how Frehley earned the nickname “the chef.”

Bill Aucoin, the manager and “fifth member” whom Stanley credits with recognizing, and maximizing, the potential of the band’s theatrical presentation, was gay; Aucoin’s boyfriend initially dyed the musicians’ hair blue-black.

Stanley riffs on the desperation that led the band to drop the iconic makeup in 1983. He details his frustration with, and the departures of, Criss and Frehley, and the eccentricities of replacements Eric Carr and Vinnie Vincent. He admits to poorly handling Carr’s cancer-related illness and death.

Based on his quasi-effeminate Starchild character, some observers believed Stanley was gay. To the contrary, he busied himself over the years with a succession of Playboy Playmates and Penthouse Pets, seeking affirmation in the attractiveness of his girlfriends.

Rock star status, however, was no guarantee against rejection. As he tried to rekindle a relationship with the beautiful actress Donna Dixon, he discovered she secretly had married Dan Aykroyd.

Simmons has long portrayed himself as the brains behind Kiss. In Stanley’s telling, he is the real caretaker of the Kiss business; Simmons is more concerned with the Gene Simmons business. It was Stanley – and his therapist at the time – who realized in the 1980s that the band’s financial managers were acting in bad faith. Other managers – not Simmons – encouraged diversification into a wide and lucrative range of merchandising opportunities.

“He was no marketing genius,” Stanley writes of Simmons. “He just took credit for things. It was unwarranted, selfish, and hurtful, and there was no way to excuse it. Calculated strategist? Sure. Genius? No.”

In the 1980s, Simmons was more focused on pursuing acting jobs and working with other bands than in contributing to Kiss. He turned in “subpar” songs, Stanley says, and all but abandoned the band while still demanding equal credit. But despite all that — and Simmons’ refusal to work on his “issues” — Stanley makes clear that they are like brothers. Their four-decade partnership works in spite of, or because of, their differences.

As those of us who have written anything even slightly critical of Kiss have learned, members of the Kiss Army can be notoriously defensive. Stanley, however, is brutally honest in his assessment of his own band’s creative missteps. In hindsight, “Music From ‘The Elder,'” the band’s much-maligned, misbegotten 1981 concept album, “reeked of the little Stonehenge coming down on the stage during ‘This Is Spinal Tap.'” The movie “Kiss Meets the Phantom of the Park” was “absolutely awful.” The new songs included on the 1988 greatest hits compilation “Smashes, Thrashes & Hits” were “horrible.” The video for one of those songs, “Let’s Put the X in Sex,” was “a whole new level of bad taste and judgment.”

Concerts during the 2000 Kiss “farewell” tour – the last time the original quartet reunited – were undermined by Criss and Frehley’s unpredictability, negativity, substance abuse and deteriorating skills. “Not surprisingly, the shows could be pretty awful,” Stanley says. “The worst feeling was reading reviews trashing the shows and thinking, ‘That’s spot on.’ The drama offstage and the hostility and resentment and backstabbing was taking a heavy musical toll.”

Having learned that fame, wealth and desirability do not make him whole and happy, Stanley gains a measure of insight in 1999 by playing the lead role in a Toronto production of “The Phantom of the Opera.” Here was a character with a frightening deformity, hiding behind a mask to make music. Stanley could identify – especially as the Phantom comes to realize his issues run much deeper than his disfigurement.

Afterward, he finally started talking publicly about his birth defect, which had been surgically repaired in the 1980s. He became a spokesman for AboutFace, an organization that helps children with facial differences. He discovered that being open and showing emotion could be a source of strength, not weakness.

In 2005, he married an attorney named Erin. His children – a son with his first wife, followed by a son and two daughters with Erin – proved to be the “ultimate resolution to issues that plagued me my entire life.” The book concludes with Stanley, now in his early 60s, happy and content; his phone contains photos of the lasagna he cooks with his kids.

Kiss remains part of his life, but only a part. This spring, the band was honored with a long overdue induction into the Rock ‘n’ Roll Hall of Fame. This summer, Stanley once again will apply the makeup for an extensive co-headlining amphitheater tour with Def Leppard. He believes that the current incarnation of the band – himself, Simmons, guitarist Tommy Thayer and drummer Eric Singer – is the best musically.

He asserts that “what Kiss does is timeless. We sing about self-empowerment, celebrating life, believing in yourself – and sex.” He also contends that Kiss can, and should, continue after he and Simmons are no longer capable of performing. “People come to see the characters we created and what those characters represent. It’s not me they’re coming to see, but what I embody.”

“Face the Music” finally, and fully, reveals exactly what that is.