KISS OPENED TOUR WITH A BANG! 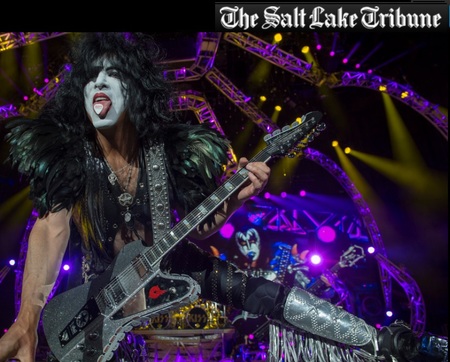 KISS lived up to its billing as one of the best live acts in rock ’n’ roll, lighting up the Utah night sky with pyrotechnics, confetti and anthemic songs. – Salt Lake Tribune

Of course, bells and whistles to the nth degree have been part of the deal with KISS since the ’70s, and they still put plenty of thought into the visual production of their shows. This tour marks the band’s 40th anniversary, and first since their induction into the Rock and Roll Hall of Fame, and they blasted through 75 minutes of bombastic tunes abetted by firebombs, flashing lights, smoke effects, Simmons spewing blood, and Stanley howling at the crowd in that raspy New York accent of his. – Salt Lake Magazine

Gene Simmons, Paul Stanley, Tommy Thayer and Eric Singer were backed by an elaborate stage show filled with more explosives, fireworks and flame throwers than many local 4th of July celebrations. The elaborate lighting system was even in the shape of a giant spider. – Deseret News