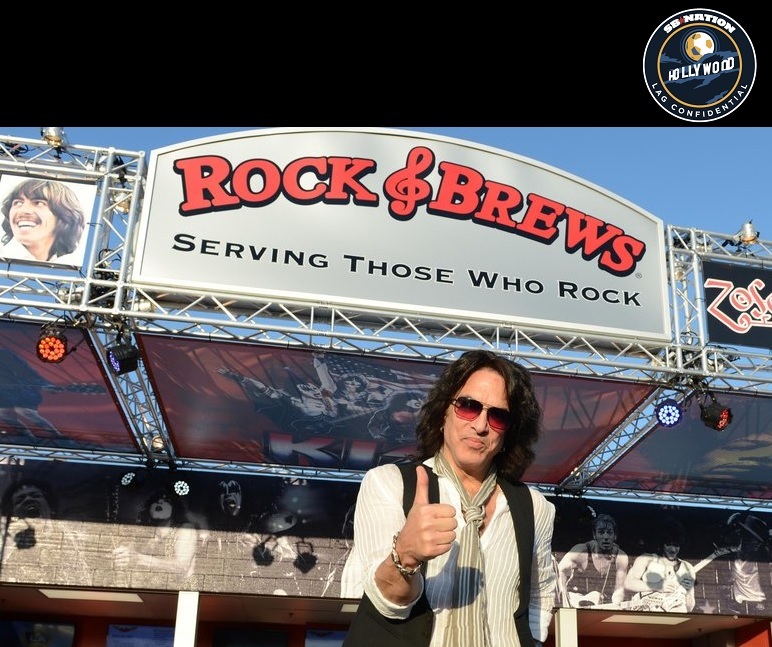 KISS rocker Paul Stanley, one half of the ownership behind Rock & Brews, was on hand at the StubHub! Center as the growing brewpub chain with a music theme opened its fourth Los Angeles location. The company began with a flagship beer garden in El Segundo two years ago, and has been aggressive in expanding its beer and wings with rock music concept.

For the media preview we were given a sample of the buffalo wings and asian wings, a giant Bavarian pretzel, and garlic cheese fries. The garlic fries were great, and the pretzel came with a nice sweet mustard. The buffalo wings were medium on the hotness scale, while the asian wings were a sweet contrast. We were given a Shock Top Belgian style wheat-ale to wash everything down.

Shock Top is pretty much a staple of stadiums wanting to give alternative beer options these days, but Rock & Brews does feature some interesting locals like the Galaxy Defender a Belgian ale from Torrance’s Monkish brewing company and a hefeweizen from Golden Road Brewery.

This restaurant is in the stand alone concession stand on the concourse plaza between the tennis stadium and the soccer stadium. Previously that location has been a Pollo Campero, and most recently tried the self-aware Stand 11 which also featured wings and beer.

When the location is fully opened later this month it is supposed to also include a signature burger. From what I tasted, it’s certainly above what I expect from concession food. The conversion to Rock & Brews included the installation of TVs and benches along the soccer stadium side, and wrap around rock themed signage including a Doors themed canopy.