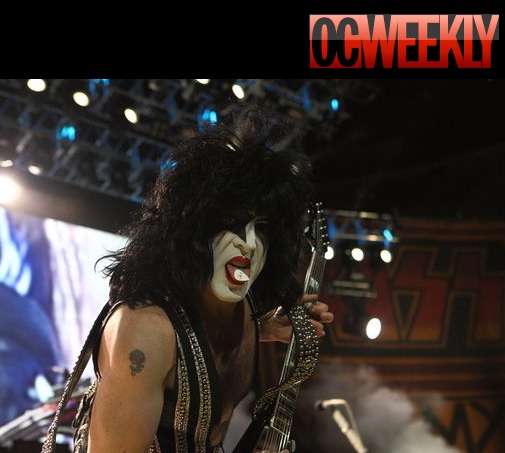 For KISS founding member Paul Stanley, living the past four decades in the spotlight has been the easy part. In his autobiography, Face The Music, is different than many of the rock bios that populate the marketplace. Born Stanley Eisen, the singer/rhythm guitarist reveals his difficult upbringings in New York City and the traumatizing affects of being born with one ear, along with a dysfunctional, unsupportive family. Add to that being called “Stanley the one-eared monster” by the neighborhood children, the rocker was engulfed by insecurities even as his band was selling out stadiums across the globe.

Stanley’s book completes the cycle of every original member of KISS penning his own take of what happened during the iconic outfit’s formative years, which at this point, is Rashomon-esque. But Stanley’s book traces his personal ups-and-downs even as the chaos that encompassed KISS swirled around him and the band hit peaks and valleys along the way. We caught up with the Arena Football team owning rock star shortly before his induction in the Rock N Roll Hall of Fame to hear about his book, his insight on the band’s history and what it feels like to finally be accepted by the rock elite.

You didn’t waste any time jumping right into things and setting to the tone with a dark, revealing intro. Why did you decide to start the book off that way?

Because there was no other way to write it. Autobiographies, especially in the entertainment field, notoriously have a tendency to go towards self-congratulatory filler, imaginary accomplishment and stories of dubious factual basis. I had no time to waste to do that. So for years, I had no intention of writing a book. But then I started thinking that my life could possibly inspire somebody else, and could give someone else some hope or reinforcement and I’d like to write a book that my kids could read as they get older to understand what it took for me to become successful. That was the redeeming goal that made me want to write a book. It was the idea of being able to reach out and do something for other people including giving my children a better sense of who I am.

You’re the last of the original KISS members to pen his own autobiography. Did that, in any way, have anything to do with the timing of the writing?

I think those other books, from what I’ve seen, veer from complete fantasy to distortion of reality. In two of those cases, it has to do with the reality that defense lawyers don’t like to put drug addicts or alcoholics on the witness stand. Now when I say drug addict or alcoholic, it doesn’t mean they currently are, but in any 12-step program, they’ll tell you it goes on forever and it’s a permanent illness. At its worst, it certainly distorts your thinking and perception of reality. So two of those books you have to take off right away. I think Gene’s book was a bit focused more on a different area. I’m not looking to commend myself for what I’ve done, or what I’ve supposedly have done. All I was looking to do is document my life how I see it. It’s not a book about KISS, though KISS is a part of it. The feedback I’ve had so far, and I’ve had some very reputable people read it, could give a rat’s ass about KISS. But it’s the inspirational and human element of the book that is more gripping and inspiring than anything else.

When you went into your childhood, it was deep and vivid, especially about the insecurities and emotional abuse you went through. Was it hard to rehash those memories and relive those moments?

I’ve been told that the book is brave and I’ve heard people say when I started writing it that it was going to be difficult and emotionally taxing. The fact of the matter is that I don’t find it brave because it has a happy ending. I couldn’t have written the book if I was still stuck there. For me, I found the book enjoyable to write. It wrapped up all of the loose ends for me and I’m acutely aware of my life and what’s gone on so with no revelations it was a way of telling the story in a way that I thought people might be able to identify with. I think it’s interesting for people to see somebody who they might hold in high esteem or look up to or idolize or pick whatever term you want, that is just as human as they are. The problems are the same and ultimately the solutions are the same.

What is it like driving down Sunset Blvd. and seeing the congratulatory billboard commemorating KISS selling one million copies of Alive!? Considering all you had been through to that point, between skipping school and hanging out by the guitar shops, was it the proverbial “Holy Shit!” moment or was it “okay, let’s keep this thing moving?”

Of course it’s holy shit how far have I come, not where I want to go yet. I’ve always maintained the drive to achieve and by 1975-1976, I hadn’t felt like I scaled a mountain.

Fans may be surprised to learn of the amount of internal strife that was occurring during those years as well. You outline a number of incidents where you were fed up with different members of the band at various times, like Peter Criss going on a racist rant at a Chinese restaurant and quitting the band for a few days and crawl back as an example. Did you feel the need to take the firm ground with everyone early to keep your eyes focused on building a better band?

He didn’t crawl back. He swallowed his pride and pseudo machismo and came back. But part of the dynamic of the band was to have to pragmatically deal with the fact that two of the guys were often times more interested in sabotaging the band, sabotaging Gene and I, than doing the right thing. And they (Criss and guitarist Ace Frehley) also wanted equal say when they didn’t do equal work. Part of what we gave the public was the myth that the four of us did everything together and contributed equally. That was something we wanted to maintain in the spirit of the bands that we loved and pictured doing that. The problem was that the guys in the band began to believe it themselves!

And that’s where the cracks began to form?

The cracks began when we met. (laughs) The chemistry and combustibility in the band is what makes it exciting and is also the cause of its demise.

Yet you and Gene have endured from your early days to now. What’s it about you guys, considering you’re opposite personalities, that keeps you guys together and allows you to maintain that friendship and brotherhood over 40 years later?

It’s hard to define and distinguish between friendship and brotherhood. I certainly see him as a brother, although we don’t always agree on how to treat your brother. At the end of the day, I know he will be there for me and me for him. My issues have always been more rooted in participating evenly and equally and still ending up with a equal share of money. I didn’t want it with Peter and Ace, why would I want it with Gene? He wasn’t doing his job and he was off doing other things and being paid for those things. I felt like if he’s wasn’t going to do his job and gonna go elsewhere. It was like he took less here or he gave me some of what he was doing elsewhere. That was an ongoing problem. But look, at this point we made the life for each other that each of us could only have dreamed of, and those lives have very little in common. I’m sure Gene would no more want to live my life than I live his. But there’s a bond there because we made it possible for each of us.

What does it mean for you to get inducted into the Rock N’ Roll Hall of Fame after waiting 15 years for that call? Does the Hall’s exerting over which members get inducted put a dark cloud, especially with the former band members putting up a stink, of the importance and significance of this crowning achievement?

Dark cloud? I see this whole thing as sunshine, and that’s the key to success. There’s no dark cloud here. We’re inducted into the Rock N’ Roll Hall of Fame, an organization that clearly seems to despise us and yet it’s reached a point where it’s so ludicrous that they had to induct us. Who they choose or don’t choose is an injustice, but the fact remains we’re inducted and whatever strife or ongoing spats we have with former members doesn’t matter. We’re here 40 years later and if you look at any pictures from the last tour, we’re playing to 15-50-75-100,000 people a night. Our victory lap is years on and we’ve won.