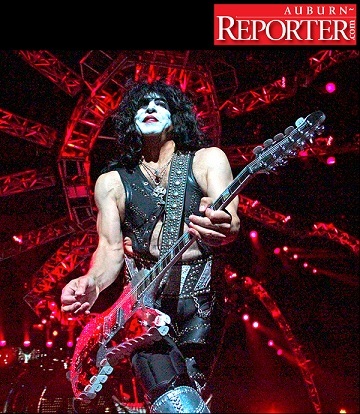 AS double-bills go, it doesn’t get more heavyweight than last Sunday’s KISS and Def Leppard show at the White River Amphitheatre.
Although Auburn was just the fourth stop on the multi-platinum selling tandem’s 42-date Heroes Summer 2014 tour, both bands appeared to be in mid-tour form, firing on all cylinders.

Although most of the band’s set featured hits such as “Foolin'”, “Pour Some Sugar On Me”, “Rocket” and “Photograph” from 1983’s “Pyromania” and 1987’s “Hysteria” – which have both sold more than 10 million copies – the band placated old-school fans with three tunes off “High ‘n’ Dry.”

In addition to the opening number, Def Leppard trundled out an acoustic version of the ballad “Bringin’ On the Heartbreak” and the guitar showcase “Switch 625”, late guitarist Steve Clark’s – he died of an overdose in 1991 – signature tune.

Def Leppard finished up the set with an encore of “Rock of Ages” and “Photograph”, the audience providing a vocal assist.

Following Def Leppard’s set, KISS took to the stage, highlighting 40 years of tunes and stagecraft with enough pyro and explosions to make your average Fourth of July display seem tame.

The band ripped through classics such as “Deuce”, “Shout It Out Loud”, “Love Gun” and “Black Diamond”, with their usual flair, puncuated by bassist Gene Simmons’ fire-breathing and blood spitting and frontman Paul Stanley’s flight above the audience.

The band wrapped up the show with a one-two punch of “Detroit Rock City” and “Rock and Roll All Nite”, relieving the KISS Army of duty until next time.