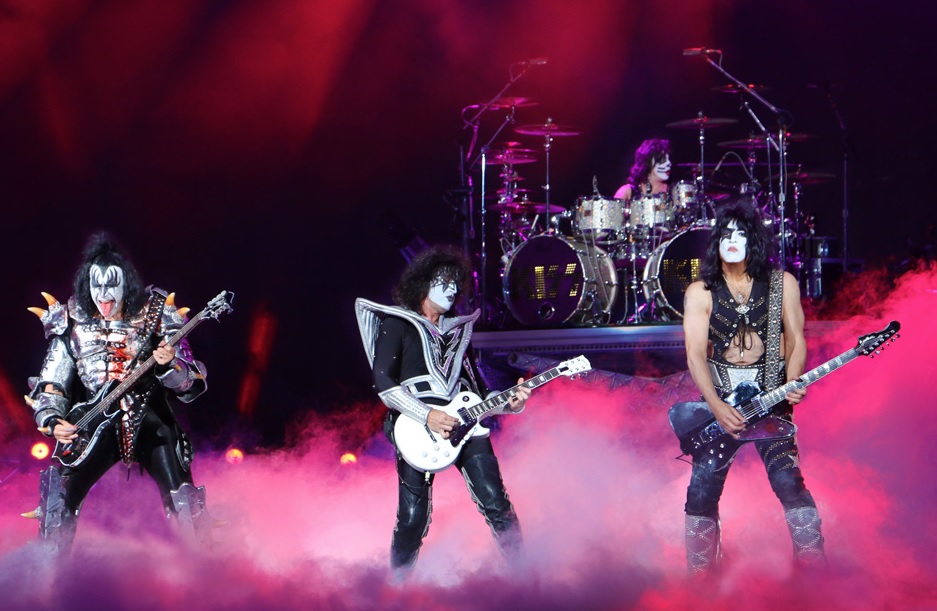 Photo by Eric Martin for KISSONLINE

With an elaborate set that blasted retina-searing flames, zip lines and trademark costumes and face paint, Kiss delivered a solid night of hard rock ‘n’ roll kabuki theater. If the band’s Wednesday night gig in the Darien Lake Performing Arts Center was shy of a sellout, the sheer volume of fan adoration – the Kiss Army as they are called – made it a mega sonic triumph.

Amid dramatic lighting and a dense cloud of smoke, streams of white confetti shot from the stage as Kiss emerged. “Psycho Circus” started off the explosive party. The song illustrates the entrepreneurial powers of Simmons and Stanley: it is the title of the song, an album, a video game, and a series of comic books inspired by the band. Kiss is a machine, a theatrical, successful and fan-loving one.

Giant bursts of flame (not quite eyebrow-endangering, but face-warming even in section 200 seats) erupted during “Deuce,” from the band’s first release. The set list featured songs from mid-’70s to mid-’90s Kiss, veering away from tracks off of its latest few recordings. During the song Simmons, Stanley and Thayer came together at center stage and played as they menaced the crowd with synchronized dance stepping and guitar neck brandishing.

Stanley, in a voice that is always pleasantly and surprisingly sweet, addressed the crowd. “Let’s have ourselves a good time. We’ve been coming here a long time … how many people have never seen us before?” There were some shouts in reply, but not many. He referred to the night as being Aug. 31, not 13, until the audience set him straight. “OK, so I’m dyslexic, tonight is a night you’ll never forget, even if I can’t remember it!”

A young Kiss Army enlistee from Alden, Mackenzie Budziszewski, 17 and a fan since she was 10, was in full Catman facepaint – with her mom, not in face paint. Although one of the band’s younger fans, this was not her first Kiss concert. The last time the band played Darien Lake, she got backstage for a meet and greet, confirmed by iPhone images proudly shared.

Nearby was lifelong, 40-year fan and Kiss scholar Edward Elliott with his wife and three young kids. It was after explosive “God of Thunder,” during which Simmons flew up to the top of the lighting spider, that Stanley asked how many fans brought their children, second-generation army members. There were many.

“Hold ’em up,” Stanley said and in-house cameras panned the crowd showing many children (some in face paint) being held aloft. “I say this with the greatest of pride,” Stanley said. “We were there for your parents and we’ll be there for you.” He flew over the crowd to a small and rotating circular stage during “Love Gun” before a pyro-rich encore of early hits “Detroit Rock City” and “Rock and Roll All Nite.”

Sharing the bill was equally long-running and hard-rocking Def Leppard, who came armed with a set list of their revered hits and legions of long-running fans. As The Who’s “Won’t Get Fooled Again” blasted from the sound system, the band hit the stage and began with anthemic “Let It Go.” It was on to “Animal” and then radio hit “Foolin.’ ”

Lead vocalist Joe Elliott was in fine form, and guitarist Vivian Campbell was stellar throughout. Drummer Rick Allen delivered an extraordinary, sternum-crushing drum solo during “Switch 625,” an early-’80s composition. The band delved into visual nostalgia with a few photo montages showing its history in vintage photos and footage during, most notably, “Hysteria.”

It was buzz-kill time during “Armageddon It,” a later song, nearly at set’s end. With an array of visuals behind the band, it was a statement about humanity’s war on the planet and each other.

“Pour Some Sugar On It,” one of Def Leppard’s best-known sing-alongs, lightened it up again before the solid set’s end.

Opening the show was Dead Daisies from Australia. The band has the distinction of playing this venue’s twice this season: the hard-working hard rockers also opened for Bad Company and Lynyrd Skynyrd earlier this summer. The band repeated its well-paced 30-minute set that features a worthy rendition of The Beatles’ “Helter Skelter.”