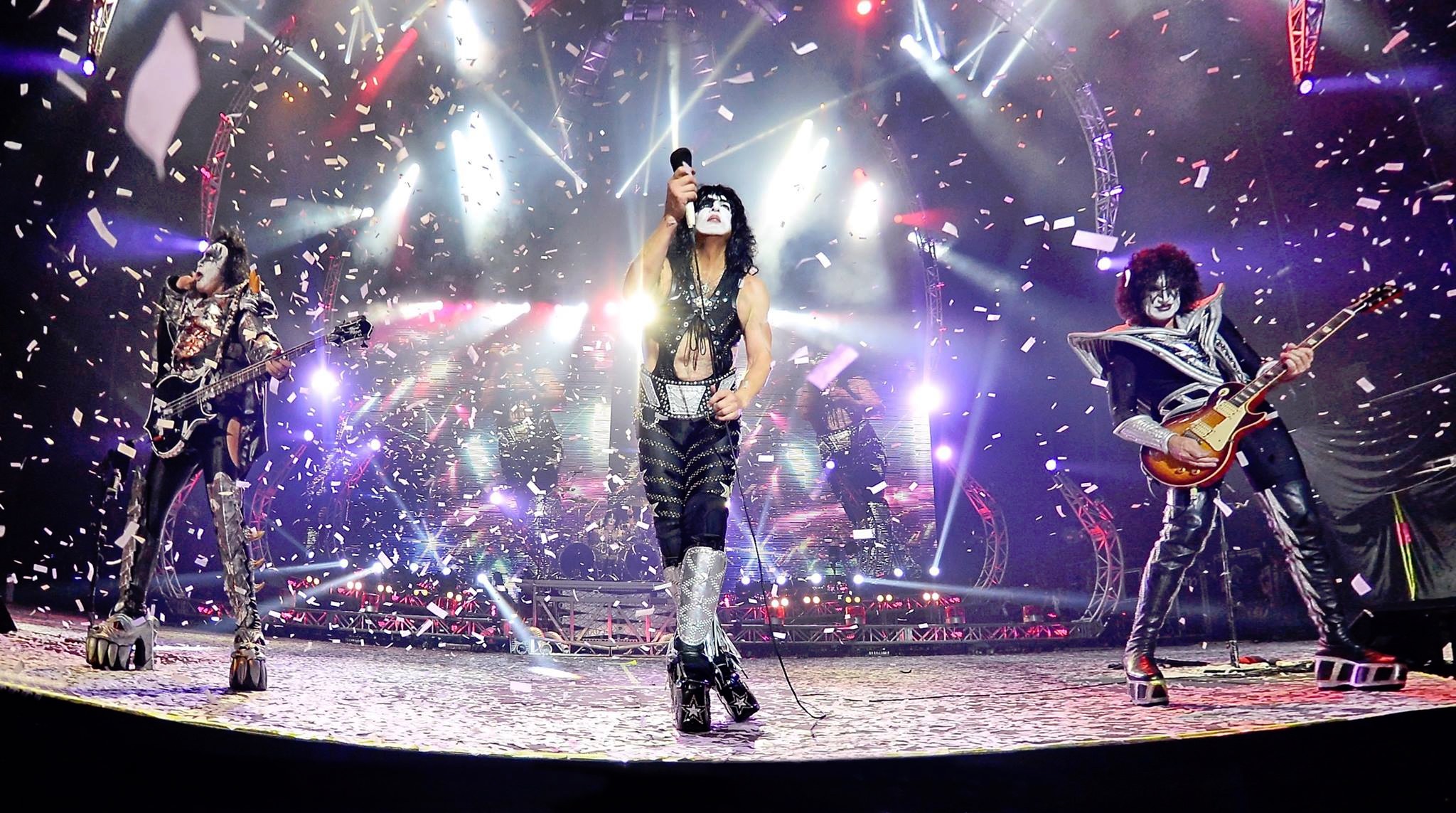 Both bands repeatedly thrilled the sold-out Amphitheatre crowd of 16,000

By: Nick Krewen / THE STAR

At the Molson Canadian Amphitheatre, Aug. 12.

Not if you’re a member of the KISS Army. The larger-than-life, cartoon-costumed, makeup-sporting hard rockers have entrenched the routines so heavily into their modus operandi for the past 40 years that replacing them as this point and time would be akin to the surgical removal of a vital organ.

So Tuesday night’s double bill of KISS with Def Leppard at the Molson Canadian Amphitheatre wasn’t so noticeable in terms of the new stuff as much as flaunting the familiar, something that both bands are very good at doing since they’re approaching their greying years, though sporting the energy and vitality of artists who are 20 years younger.

In a continuation of the happenstance “Headbangers Week” theme that began Sunday at the venue with the Mötley Crüe/Alice Cooper concert, nostalgia played a key role in the KISS/Def Leppard pairing, with both bands repeatedly thrilling the sold-out crowd of 16,000 that had gathered to witness their heroes.

With Def Leppard, it was less about flash and more about substance, performing an incredible string of wall-to-wall hits over the course of 70 minutes culled from their heyday era in the ’80s and early ’90s.

In what amounted to a firsthand demonstration of the Mutt Lange classic song parade — the famous South African producer who co-wrote and meticulously arranged the most popular albums of the Def Lep catalogue and propelled them past 100 million in sales — such rock anthems as “Let’s Get Rocked,” “Love Bites” and “Armageddon It” revealed Lange’s Midas Touch: Throw in a fairly powerful, steady, simple beat (ably handled by Rick Allen, the band’s one-armed drummer), add in a strong melody with an irresistible chorus, and pile on the scrumptious harmonies.

And Def Leppard delivered, as if the passage of time had been indefinitely suspended: Lead singer Joe Elliott, 55, has lost none of his range or prowess; the dual guitar attack of Vivian Campbell and Phil Collen is as potent as ever, and the stacked backing vocals that added in bassist Rick Savage remain undiminished, causing the Leppards to receive thunderous ovation after thunderous ovation.

“We’re two-thirds through our tour, and we’ve had some good crowds, but nobody has been as awesome as you,” Elliott told the crowd, and he seemed heartfelt with his comments.

Then again, with a song list that included “Pour Some Sugar On Me,” “Rock Of Ages,” “Animal” and a morphing acoustic/electric rendition or “Bring On The Heartbreak,” how could Def Lep fans react otherwise?

Which brings us to KISS, who pretty much offered a retread of last year’s Monster tour that included the combo lighting rig and an impressive hydraulic stage setup known as “The Spider.”

But what may have been a retread to some wasn’t to others: when singer and guitarist Paul Stanley asked for a show of hands of those attending their very first KISS concert, almost half the crowd raised theirs.

In the meantime, dressed in oversized platform boots, black-and-silver leather get-ups and sporting the makeup that should have secured them all MAC sponsorships a long time ago, Stanley, Gene Simmons, Tommy Thayer and Eric Singer offered a spectacle that almost seems rote in the annals of KISStory.

For the opening “Psycho Circus,” three of the four descended from the Amphitheatre’s rafters on the descending Spider, camouflaged by a colourful fog, while drummer Singer, whose drum kit was set on his own separate stage, rose 20 feet or so into the air.

An explosion of fireworks rocked the stage, and as “Psycho Circus” melted into “Deuce,” small fireballs were shot into the atmosphere. For the next 80 minutes, the visual Razzle Dazzle didn’t subside, as a gigantic back panel video screen covered every gesture and every one of Simmons’ comical facial contortions.

There was the expected fire-breathing segment from Simmons that concluded “Hotter Than Hell;” the “flying” Simmons — who bloodied his mouth and performed “God of Thunder” after being elevated to the hovering Spider — and a zip-lining Stanley, who hovered over to a B-stage in the middle of the venue to deliver “Love Gun” and the first few words of “Black Diamond.”

The setlist was a good mix of ancient and somewhat recent material spanning 40 years: robust performances of “Shout It Out Loud,” “Lick It Up” (which, for some reason, contained a snippet of The Who’s “Won’t Get Fooled Again,” echoed by Def Leppard in their earlier set) and “Calling Dr. Love” set the stage for the two encore/finales: “Detroit Rock City” and “Rock And Roll All Nite,” and the requisite explosions and fireworks that accompanied them.

And both Def Leppard and KISS vow that the party for both of them will continue far into the indefinite future.