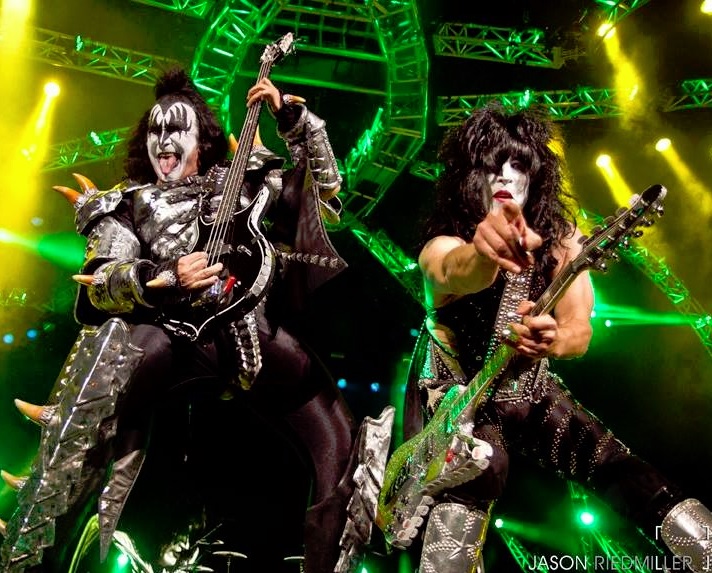 By ALAN K. STOUT / MUSIC ON THE MENU

SCRANTON – Over the past 22 years, I’ve reviewed hundreds of rock concerts. But I can’t recall too many times when I’ve written one in the first person.

Today will be an exception to the norm. In fact, what I’ll write today is probably more of a commentary than a traditional review.

KISS rocked The Pavilion at Montage Mountain in Scranton on Saturday night. It was my 33rd time seeing the band. Those shows have been scattered over three decades, dating back to 1984. And this got me to thinking, “Why do I – and millions of others – keep coming back? What makes KISS so special?” And, while putting on my “rock journalism” hat, I also asked myself after Saturday night’s show if the KISS magic was really still there.

If you’ve been reading my writings over the past two decades, you probably know that I am a KISS fan. And, if you didn’t know, and the fact that I already told you about my 33 ticket stubs wasn’t enough to tip you off, the Paul Stanley-style rose tattoo on my right arm would probably do the trick. So, in offering my thoughts on Saturday’s show, I also give you full disclosure:

I love KISS. I love their songs. I love their concerts. I love their whole vibe. And oddly, the kid who once wore a different KISS t-shirt to school every day has now, in a small way, gotten to know the band on a somewhat personal level. That came through my work, as I’ve interviewed them enough times over the years that they are now familiar with me and my writings. When I sometimes see the band backstage before one of their shows, even if it’s just for a quick hello at a meet-and-greet, there are smiles of acknowledgment. On Saturday, Paul Stanley told me it was good to see me. He said the same thing when KISS came to town two years ago. It’s always good to see him, too.

But it ‘s always even better to see the show. And this was again true on Saturday. Because the magic is indeed still there. And it didn’t take long to be reminded why I – and millions of others – keep coming back. Musically speaking, KISS is still a bombastic force. And on this tour, which celebrates the band’s 40th anniversary, they are offering one of their most interesting set-lists in years. Opening the show with “Psycho Circus” was a great move, as its lyrics are perfect for such a position in the set. When Stanley sings “Welcome to the show!” throughout the song, he isn’t kidding. KISS still offers a show like no other.

“Hide Your Heart,” a minor hit from 1989, was another welcome addition to the 40th anniversary tour. An MTV favorite at the time of its release, it’s probably one of the best songs the band has ever recorded and with the crowd singing along to its fabulous chorus, it served as one of the show’s highlights. And if you were hoping for the classics, they were all there. The guitars of “Deuce” were grinding and ferocious, the chorus of “Shout It Out Loud” made the crowd euphoric, Gene Simmons was nastier than ever during “War Machine” and guitarist Tommy Thayer and drummer Eric Singer helped fill “Hotter Than Hell” with a fine sense of groove. “God of Thunder” churned, “Love Gun” burned and the arrangement of “Black Diamond” offered melodic twists and turns. The band was tight.

Simmons remains a remarkable workhorse on stage. He sings with as much zest as ever and his bass playing – often underrated – is actually quite impressive as you watch his fingers dance about the fretboard. Stanley, the epitome of a frontman, can still have different sections of the crowd competing to win his approval simply by pointing at them. You think that’s an easy thing to do? If so, why would 99-percent of all of the other lead singers in rock be afraid to even try it? There are few true ringmasters in music. Paul Stanley is one of them.

Though no one ever seems to question Thayer’s and Singer’s fine musicianship, some have questioned why KISS has contined on with “new guys” after the original lineup of the band stopped touring together in 2000. But what they probably don’t realize is that Thayer’s now been playing with the band live for about a dozen years. It’s been about the same for Singer, who also played with the group from 1992-95. In fact, the full original lineup of KISS was together from 1973-1980, and again from 1996 to 2000. Do the math. That’s just 11 out of 40 years. Were those good times with Gene, Paul, Ace and Peter? You bet. But with KISS, it’s always been a good time. And it still is.

KISS is also in a unique situation in that they’ve created a few signature parts of their stage show that fans have come to expect. And while some might wonder why the band sticks with such tried and true showmanship tour after tour, the fact is if they ever dropped them from the show, people would be highly disappointed. Case in point: the first thing I did on Saturday night when I took a look at the all-new stage show was look up to the top of the lighting rig to see if there was a little podium up there with a microphone. There was. “Good,” I thought. “Gene will fly.” Next, I looked towards the soundboard, to see if there was a mini-stage set up in the middle of the audience. There was. “Good,” I thought. “Paul will fly.”

I’m glad they keep all of the cool stuff, from the fire-breathing to the rising drums to the blizzard of confetti during “Rock and Roll All Nite.”

As someone that’s also seen KISS perform in small clubs on a few occasions, I can also just as easily say that such things really don’t matter to me. I like KISS for the music, not the flash. But there is a reason that it’s important that some of the traditional staples of the KISS show always remain, and again it’s something that makes KISS unique. There is a rite of passage with this band. Though Saturday was my 33rd KISS show, it was the first for my daughter. Two lifelong friends, each of whom I’ve been going to see KISS with for 30 years, also took their sons for the first time. KISS is well aware that this is happening. At one point during the show, Stanley even asked the crowd how many people had their kids with them, and asked that they hold them up, so the band could see them. He also asked, much earlier in the set, how many were seeing the group for the first time and promised they would have “a night they would never forget.” And though I, as always, had a blast watching and listening to “The Hottest Band In The World,” it was seeing all of those first-timers, both younger and older, that got me my answers to those three questions. In fact, the answer to the third question came from the first two: “Why do I – and millions of others – keep coming back? What makes KISS so special?”

I saw it on their faces. It was evident by the roar of the crowd, song after song.

The magic is still there.

(This commentary, as well as some thoughts on Def Leppard’s performance, will also appear in the August 13 issue of The Weekender. Photo courtesy of Jason Reinmiller. http://www.theweekender.com)