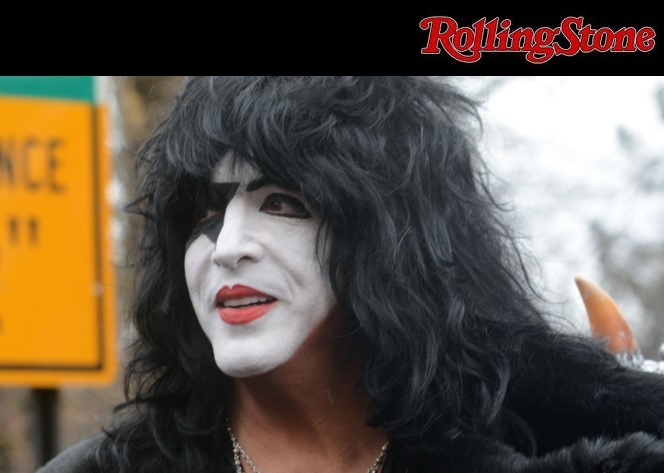 Dave Grohl didn’t need his manager to contact Paul Stanley to ask him to appear in Foo Fighters’ HBO music documentary series Sonic Highways; he simply had to drive his kids to school. “I’ve seen Dave almost every day for the past three years,” says Kiss’ singer and guitarist, whose children attend the same school as Grohl’s. “Every year we actually do concerts, separately, but the same nights as a fundraiser for the school. He asked me if I would be involved with the [HBO] show, and I said absolutely.”

Stanley appeared in the New York City-based series finale Friday to speak to the virtues of his hometown’s music scene, including tributes to famed studios Electric Lady and the Record Plant and why the “cool” artists were merely “the soundtrack to a fashion show.” “He just wanted me to talk, and I’m very good at that,” the Kiss frontman says. “Some people are hams; I’m the whole pig.”

Stanley said he was happy with the way Sonic Highways has been chronicling America’s musical history. “I’m really taken with the show and quite impressed because I didn’t know what to expect,” Stanley says. “But it’s more than legit – it’s top shelf.” Rolling Stone talked to the singer about the best — and worst — of New York City.

When Dave Grohl explained Sonic Highways to you, what were your first impressions?
It’s such a brilliant idea – the idea of highlighting cities and then writing a song influenced by your experience in that city. It’s heady stuff. For whatever anybody may think of Dave as a rock & roll artist or a child of punk rock, this guy is very deep. He’s the real deal.

What do you think of the show?
The show is just terrific. Dave is so unique in the fact that here’s a guy who was in a world-renowned band as the drummer and found his way to setting his own course and, decades later, being a juggernaut in the music business. All of the sudden, I’m thinking he’s like the Ken Burns of rock documentaries. The guy is pretty impressive.

Are you a Foo Fighters fan?
Yes, absolutely. And it’s funny, there were times that I would hear music on the radio – just something great – and not know who it was and very often it was Foo Fighters. It’s incredible to think of somebody coming out from behind the drums with such a full concept as Dave has had and create music. I mean, the first Foo Fighters album, that’s just Dave. So the template and everything he’s been working from is bigger than anyone expected from the guy who was just viewed as the drummer of Nirvana.

Foo Fighters covered Kiss’ “Shock Me” in concert a few years ago. Have you heard that?
No, I haven’t, but Nirvana covered “Do You Love Me?”

Did you like that?
I like anytime somebody does one of our songs. That alone, that’s terrific for me. I don’t have to critique versions of songs, but whether it’s the Replacements or Lenny Kravitz or anybody, doing “Hard Luck Woman” with Garth Brooks – it’s all great. This is from a kid who dreamed of being in a rock band and, 40 years later, has seen what the seeds have spawned.

Dave wanted you to talk about New York. What did you want to convey about the city?
The recording scene in New York during the Seventies. The studio scene was so fertile at that point. Now you have people making albums on their coffee table with a computer. But back then, literally, you could be in a studio like Electric Lady, which I was in from the time I was 17.

What was Electric Lady like back then?
In studio A, it might have the Jeff Beck Group, and in studio B, it might have Mountain or Stevie Wonder. Then later on, you’d have Jimmy Page mixing the soundtrack for The Song Remains the Same in A. It was 24/7 of who’s who. The studio scene was so fertile, and every studio was a den of who’s who. Everybody seemed to gravitate toward the Record Plant, Electric Lady, the Hit Factory, these legendary studios where great music was made every hour of every day of the week.

But that was also the time when the Fillmore East was in its heyday and, on any weekend, you could go see three amazing bands for $3, $4, $5. The city was really alive with world-class rock & roll. I can remember going to the Fillmore to see Derek and the Dominos with Humble Pie opening or the Jimi Hendrix Experience with Sly and the Family Stone. A lot of amazing bills back then.

What is your favorite memory from Electric Lady?
I remember when Kiss was in the studio, I was in the waiting area just taking a break. And Jimmy Page came out of studio A at that time they were mixing The Song Remains the Same, and he knew who I was. For a kid from Queens who sat in the audience spellbound watching them play, it was a transcendental moment to suddenly be on his radar. That was one of those moments that I don’t forget.

Once you started touring and got out of New York, what did you learn about the city?
The music scene in New York was wonderful in the sense that it was creative and thriving, but, for the most part, the music suffered because most of those bands were spending more time hanging out at Max’s Kansas City and all of these clubs than practicing. The music became the soundtrack for what they were wearing as opposed to really working at their craft. Most of what was coming out of New York was not world-class music.

Who are you referring to?
There were all these artsy bands that perhaps had more in common with Rimbaud and Kerouac than they did with Elvis Presley, and if you want to read poetry, that’s great, but it’s not rock & roll, and it just doesn’t have balls. The roots of rock & roll are below the belt, and if too much of it is above the belt, it ain’t rock.