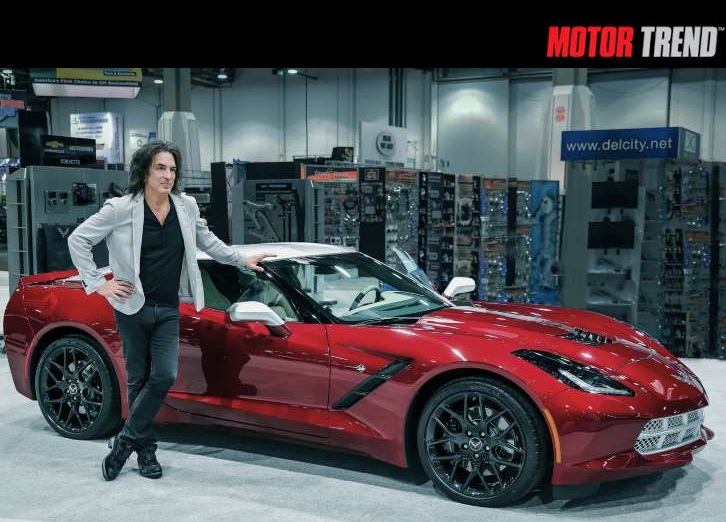 Kiss front man Paul Stanley is a bit of a Renaissance man as a singer-songwriter, painter, New York Times best-selling author, star of "Phantom of the Opera," and, in a former life, a New York City cab driver.

He can add styling a Corvette for General Motors to the list after working with the automaker on a 2015 Stingray for the SEMA show in a car that would also become his daily driver.

"I've yearned to be driving an American car without apology," he says. "I like driving a car that says 'Corvette' on it. I like driving an American car because we've always had capabilities to turn out great cars, and for reasons that are lost to me, we chose not to. But as the competition became stiffer and as the car industry seemed to be folding, I guess the message was resounding, and lo and behold, here were some great cars."

For Stanley, the decision about what car he drives is about supporting American automakers. "I have an Escalade, which is great for the family, but I personally wanted my primary car to be an American car without people either scratching their heads or having to explain to people," he says. "I'm proud to drive these cars, and I've seen the cars that are coming up from General Motors, and they are unapologetically world-class contenders. I saw some of the next generation cars in Warren, Michigan, that are just going to blow people away."

His daily driver before the SEMA Stingray was the previous year's model, a Blade Silver 2014 Corvette C7. Stanley was such a big fan of his 2014 Corvette that he was asked to prepare a concept car for General Motors at the 2014 SEMA show. "It took me two seconds to think about it, and I said, 'Of course,' " Stanley says.

He flew out to Detroit to explain what he was looking for conceptually. "It was interesting because what they told me is they really hadn't worked with any celebrities who could articulate, could verbalize what they wanted or why," he says, "and I very much wanted to take this fabulous car and make it into more of a European gentleman's sports car."

When Stanley originally saw the new Corvettes coming out, he reached out to General Motors. "I called Mark Reuss, who at the time was the president of General Motors North America and now is in charge of global development, so we struck up a really fun friendship," Stanley says. "He also turned out to have really great taste in music because he's a huge Kiss fan."

Stanley says that mechanically, the new Corvette Stingray is perfection. "I've been waiting literally decades to be able to drive an American car," he says. "It's one thing for people to tell you buy American, but my response is, give me something that's world class and comparable. That unfortunately wasn't the case for a long time."

CLICK HERE to read the rest of the story.