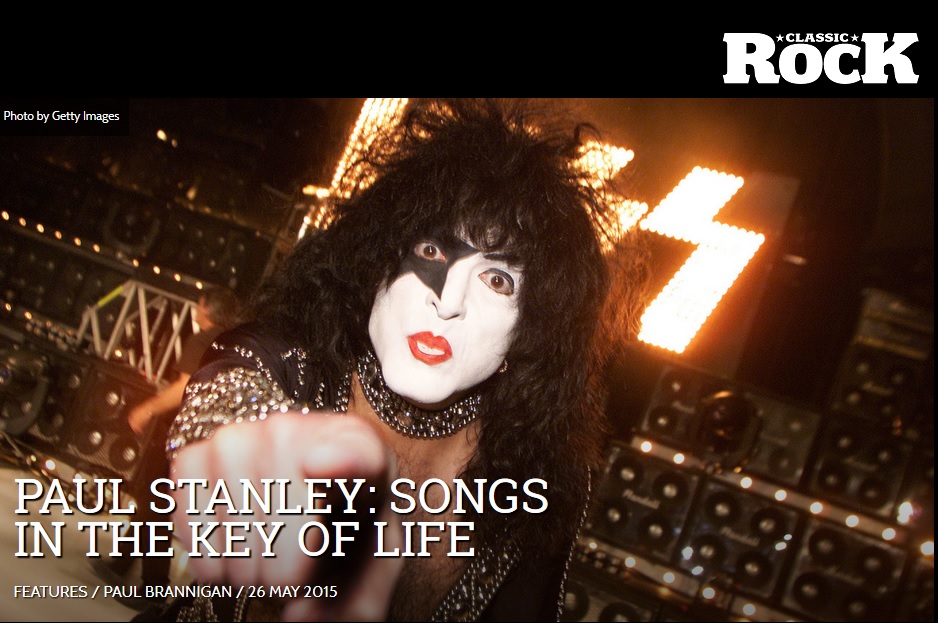 As KISS prepare to close this year's Download Festival, we ask Paul Stanley about some of the band's songs, starting with…

Rock and Roll All Nite
Rock and Roll All Nite is astounding, in that every night we play it, it brings on a euphoria and a feeling of abandon in the crowd, everything that was it supposed to do. It was meant to be a rock anthem that would sum up the philosophy and common point of view between Kiss and our fans. I remember sitting with my guitar in my hotel room in what was then the Continental Hyatt House, on Sunset in LA, and trying to figure out how to encapsulate what Kiss is about and what our fans are about, and very quickly I came up with the melody, the chords, and the way the lyric and hook would repeat. Gene had a song called Drive Me Wild and I basically took his verse and put it to my chorus, and that is Rock and Roll All Nite.

Detroit Rock City
Once again, this was a calling card of sorts for Kiss. I always believe that albums, particularly ours, should start with a song that captures the spirit of what you’re going to get on the rest of the album, and Detroit Rock City was very much that for Destroyer. The surprise was that when radio stations got the single, they flipped it over to play Beth [the single’s B-side] and lo and behold we got a massive hit with a different song. It’s funny, because back then when you put out a single to radio and to the public you chose a B-side that was the weakest track on the album, or at least the track that was least likely to ever make it onto the radio, and yet we ended up having a massive hit with this song that we never imagined connecting. You can plot your career so carefully, but sometimes those happy accidents end up helping to determine where you’re going to go. This TV performance was huge for us: after this, we were genuine superstars.

Tonight You Belong To Me
I wasn’t trying to compete with anyone on this album, except with myself to write the best possible songs. Tonight You Belong To Me is a song that started out as an acoustic guitar chord pattern, kinda as a prelude to all hell breaking loose, like with I Want You or Black Diamond, which was a set up I used sometimes. It’s a song that’s about a dramatic and tumultuous relationship I was in at the time, where I knew that the next morning it was going to be over. Everyone has had that night at the end of the relationship where it’s that awkward last night, when the cards have all been laid out, but you think ‘Well, whatever happens tomorrow I can’t control, but tonight you belong to me.’ The relationship didn’t work, but at least I got a great song out of it.

I Was Made For Loving You
I Was Made For Loving You came out of a time when the band was a bit lost: we’d reached a point where we had kinda forgotten why we were Kiss, and why we loved doing what we did. We were all, in some ways, drunk on success: there were sycophantic friends around, there were drugs, there was alcohol, there was every kind of vice that fame brings with it. At the time, I think we had maybe lost some of our rock edge and were a bit more concerned about getting peer acceptance, and that’s always a poisoned idea, because you should never forsake the people who love you for ones who don’t.  It was written at a time when I was hanging out at [infamous NYC nightclub] Studio 54, and I was thinking ‘Gee, I could write one of these songs.’ All the songs at Studio 54 seemed to be about ‘tonight’ – about having a good time in the present rather than thinking about the future – and so I went home, set the drum machine to 126 beats per minute, and got to work. Like many of the songs on Dynasty, it didn’t particularly sound the way I had hoped, but nonetheless it was great song, and a huge worldwide hit. But if it’s not to everyone’s taste, I understand.

Shandi
My background is as much singer-songwriters as it is hard rock, and as much Motown and Philly Soul as it is hard rock: my influences have always been quite diverse. I’ve always believed that if you only listen to one kind of music you’ll produce pretty defective songs in the sense that they’ll have no breadth. And a song like Shandi basically comes from me sitting with a 12 string acoustic guitar. Before I could plug into a Marshall amp, I used to have a harmonica around my neck and an acoustic guitar and I used to go to Greenwich Village to see singer-songwriters, and Shandi is part of that tradition. Lyrically it’s about a relationship, one of those relationships where you just keep going on even though you kinda know it should be over, where you should really be saying ‘Goodbye’ rather than ‘Goodnight’, but you can’t end it.