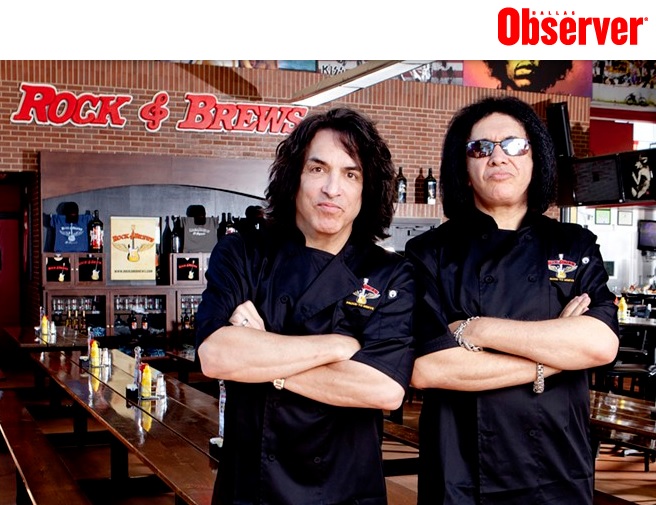 The members of KISS have done just about all there is to do in rock 'n' roll. After selling millions of records thanks to hit songs like "Detroit Rock City," Rock 'N' Roll All Nite" and "I Was Made for Lovin' You" over the past 40 years, the band was finally inducted into the Rock 'N' Roll Hall of Fame in 2012. So it's no surprise that they're looking for a new challenge at this stage in their careers.

Now KISS members Gene Simmons and Paul Stanley are doing just that as they plan to open a Rock & Brews restaurant in North Texas early next year. It's just one of nearly a dozen Rock & Brews located across the U.S.

“This is not a KISS restaurant,” Stanley says in a phone interview. “It doesn't need a KISS. It's a great eating and drinking establishment.”

Rock & Brews is a family friendly, rock-inspired restaurant that celebrates classic rock, good food and a family environment. It's dog friendly and offers a patio and a play area for children. It's a place where parents can spend quality time with each other or friends but not compromise their personal tastes by eating crappy mac-and-cheese, Stanley says.

The restaurant offers not only good hamburgers, great salads and “off the hook” fish tacos in an atmosphere of classic rock art, but also dozens of craft beers from micro breweries. “In the last decade, beer has become the new wine,” Stanley claims.

The idea for Rock & Brews was birthed backstage at a KISS concert. In the summer of 2010, Stanley and Simmons were visiting with longtime friends Michael Zislis, a restaurateur/hotelier extraordinaire; Dell Furano, a former CEO of Live Nation; and Dave Furano, a well-known rock 'n' roll concert tour promoter for bands like the the Rolling Stones, Grateful Dead and the Allman Brothers.

“What's better than rock and brews?” asked Dave Furano, who was enjoying a beer at the time. A spontaneous brainstorming session between the five friends led to the proverbial light bulb exploding, and Rock & Brews was born.

The first location opened near LAX in the beach community of El Sequndo, California, in April 2012. Three years later, Rock & Brews was recognized as the “Break out Brand” by Restaurant News and ranked No. 7 on the “Future 50: The Fastest Growing Small Chains in America” in Restaurant Business magazine.

Rock & Brews will be a nearly 9,000-square-foot restaurant located in “Grandscape” in The Colony, a Dallas suburb. Brett Anz and Perry Mann, the two principal Texas partners, will operate the new location. They decided to open the restaurant near the Nebraska Furniture Mart and the coming Toyota headquarters because of the population explosion in that part of North Texas.

“We are very excited to work with Paul and Gene to introduce Rock & Brews in the Lone Star State,” Anz says in a press release. “We are dedicated to providing a quality dining experience and a welcoming environment for families, with something exciting for rockers of all ages.”

But Stanley stressed that the North Texas Rock & Brew isn't just another rock 'n' roll chained restaurant. They plan to offer local produce and to hire between 150 to 200 locals to staff the restaurant.

“We've been looking for a long time to open in Dallas,” Stanley say. “I remember playing Tarrant County and the Reunion Arena. It's a great history not only with me and KISS but with every rock band. So here is our chance to pay homage.”

“For me, one of the greatest things to becoming successful is the gift of giving back,” Stanley says. “In these times, patriotism is hip and cool. To stand up and love your country is something that we are proud of. That is what America is about.”