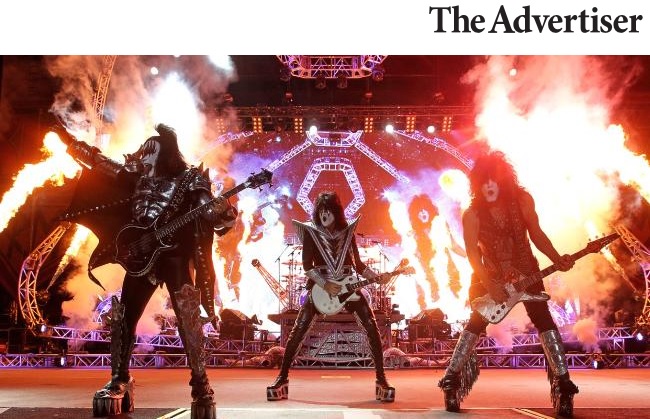 By  PATRICK McDONALD / The Advertiser

If 1970s superhero band KISS wrote the handbook on rock’n’roll theatrics, then its 40th anniversary tour not only tears out the pages but sets fire to them, blows them up, shoots them with laser beams and sends them on a skyrocket to hell and back.

Its gigantic mechanical Spider, making its first appearance Down Under, descends from the ceiling with its legs arched across the stage, the band riding on its steel back while hammering out the unmistakeable opening riff of Detroit Rock City. .

Red spotlights scan the rabid crowd from its eyes and fireworks explode from its underbelly while balls — no, make that walls — of flame envelop the backdrop, sending forth waves of heat that threaten to barbecue the front rows of fans.

It was like an entire concert’s worth of effects crammed into one song.

This old rock dog might not have learned any new tricks — bassist Gene Simmons still breathes fire, spits blood and flies to the rafters to prove he’s the God of Thunder, singer Paul Stanley sails on a wire over the crowd to fire his Love Gun, Tommy Thayer shoots sparks from his guitar into the lighting rig and Eric Singer’s drum kit rises as he roars out Black Diamond — but like a great Cirque du Soleil show, the band has learned how to wrap the same stunts up in a shiny new package.

On top of this, the current line-up plays fast, furious and incredibly tight, injecting new-found energy into standards like Calling Dr Love or Lick it Up — which morphs into The Who’s Won’t Be Fooled Again — and dusting off such live gems as Cold Gin and the extended outro from She.

The setlist spanned the decades, from its 1974 debut album with Deuce, through the 1980s metal crunch of Creatures of the Night, I Love It Loud and War Machine (complete with hundreds of video game-style Gene warriors), through the late ’90s reunion on Psycho Circus to the sure-to-be-classic, frenetic Hell or Hallelujah from its latest album Monster.

There was vintage footage of the band on the big screens during Do You Love Me, and Stanley — who is back in fine vocal form — even led a sentimental crowd singalong on its 1980 Aussie pop hit Shandi.

A three-pronged encore of Shout It Out Loud, I Was Made For Lovin’ You and Rock and Roll All Nite sent the crowd home in a confetti-covered, guitar-smashing, pyrotechnics-induced frenzy.

That’s how you do it, kids.