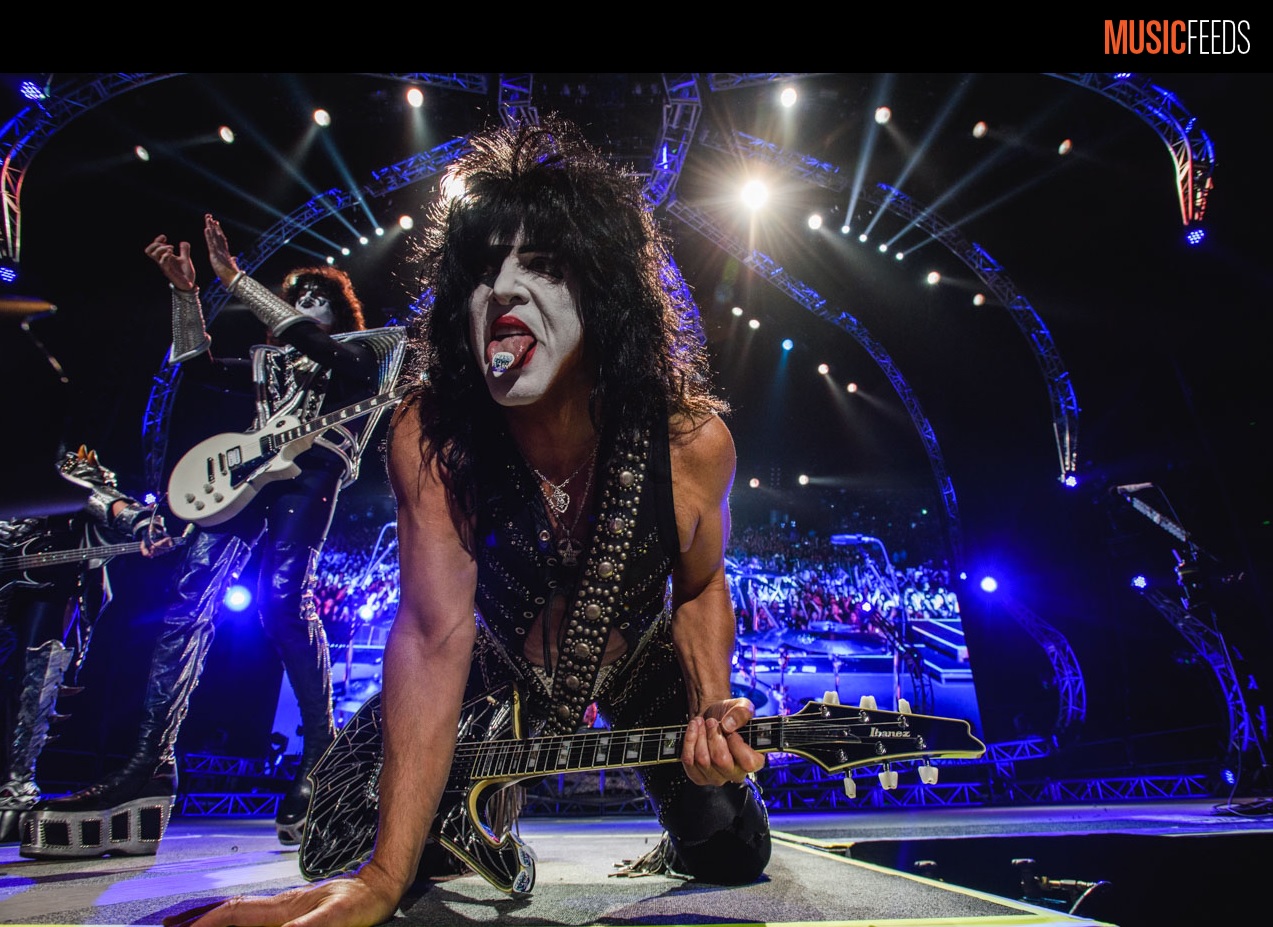 Sydney clearly isn’t feeling uptight on a Saturday night as the KISS Army gathers in its battalions outside Allphones Arena.

Approximately one in four faces is smeared with black, white and silver warpaint, the flash of smartphone selfies sparkles across Sydney Olympic Park like sequins on Starchild’s shoulder pads, devil horns are raised, demon tongues are flapping, a fully kitted-up Spaceman casually walks his girlfriend past on a dog leash (Fifty Shades of Thayer I guess?) and a slick covers band playing at a nearby pub graciously soundtracks our approach to the arena with System Of A Down’s Toxicity.

It’s the first in what will be a night of monster hits, and the next comes from drummer Brian Tichy of supergroup support act The Dead Daisies, who beats his kit so hard you’d swear it had personally wronged him.

The now John Corabi-fronted band are everything you’d expect from an allstar crew of seasoned rock dogs. Musically tight, fearlessly interactive with a restless crowd and consummate showmen, they tick all of the boxes in the rock n’ roll playbook.

The fellas even throw in a pair of classic rock covers with a side of guitar hero theatrics from touring axemen Dave Leslie (Baby Animals) to keep the punters salivating.

But it’s a bite of calamari compared to the king-sized Lobster Mornay that is KISS live in concert. And that’s no affront at all to The Dead Daisies; the same would be said of pretty much any other band in existence.

They blast the crowd with Detroit Rock City and the sheer impact of this sonic and visual assault smashes everyone in the face like Thor’s hammer. The Knights In Satan’s Service have everyone completely stupefied from the very first power chord, and most of us won’t snap out of it until we’re halfway back to the car some two hours later.

Don’t get me wrong, I’ve seen more than my fair share of blockbuster stage productions. Alice Cooper, Motley Crue, Muse, AC/DC, you name it. But none of it has prepared me for the eyeball-exploding spectacle of KISS live.

The Psycho Circus unfolds with drummer Eric Singer conducting a symphony of flamethrowers as projected footage of a terrifying Smaug-like dragon flashes onto the towering stage backdrop during the crushing riffage of War Machine, as Gene Simmons breathes fire from a flaming sword.

The Demon’s iconic tongue is out in force, lapping up the spotlight thirstily as he stands between shadowy patches of smoky hellfire, gargles blood and lets rip one of the meanest bass solos this side of purgatory. 40 years on and Simmons still looks like he only just crawled out of the blistering pits of hell itself.

Also let the records show, he was rocking the topknot before it was cool.

The night ramps up into a monumental onslaught of iconic KISS moments: from Simmons flying like a hellbat above the crowd, to Thayer shooting fireworks out of his guitar mid-solo, to star-faced frontman Paul Stanley soaring out onto a podium in the centre of the arena to ensure maximum impact of his Love Gun.

It’s two hours of gratuitous, magnificent, dizzying eye-porn soundtracked by all of your KISS faves: Calling Dr. Love, Lick It Up, Shandi, Shout It Out Loud, I Was Made For Lovin’ You and of course Rock And Roll All Nite all get a guernsey.

But the thing is, if you took away all of the flame jets, giant robot crabs, confetti canons, firework windmills, monster disco balls, aerial acrobatics, laser displays, bloody vomit, high budget screen projections and pretty much every other thing that makes a KISS live show one of the most gobsmacking visual spectacles in the history of rock n’ roll, you’d be left with four outlandishly dressed but nonetheless talented musicians performing a setlist of sick tunes tighter than the star-studded spandex hugging Paul Stanley’s crotch.

Subtract all of the blockbuster bells & whistles and you’d still have yourself one killer AF rock show. It just wouldn’t be quite as much fun.

You wanted the best? Yeah. You got the best.