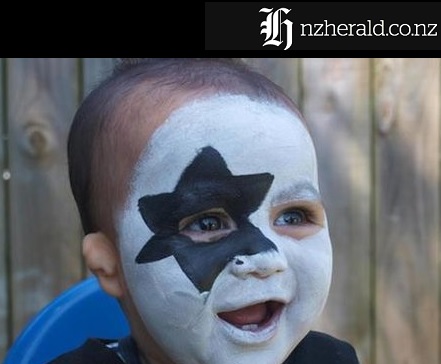 Paul Stanley opens up about his tough childhood and living with a rare ear condition.

Baby Felix Taito will meet legendary rock band KISS tonight, and although the 7-month-old is too young to be a fan, the meeting will be a very special one.

Felix was born with microtia atresia, a hearing condition he shares with the band’s frontman Paul Stanley.

Microtia atresia is a congenital defect where the outer ear has not fully developed and there is no ear canal. It affects only one in 10,000 children.

Felix’s parents, Aucklanders Seleta and David Taito, started a social media campaign last week to try and get Felix to meet Stanley, in the hopes that having a photo of the pair would inspire their son as he faces the challenges posed by the condition.

After their story was picked up by the Herald, the Taitos managed to make their dream come true.

The band’s promoters have arranged for the family to have a photo opportunity with the band tonight and Stanley himself has offered words of advice for Seleta and David.

“Children don’t need a solution from you, what they need is your understanding,” he said.

“Kids want to be heard, they want to be listened to. They’re not always looking for you to solve problems.”

Stanley said growing up with the condition had been hard for him. He still has almost no hearing in his right ear, although he has had cosmetic surgery to fix the appearance of his ear.

“Growing up, when you’re different it’s very difficult. Children are, well, they can be cruel but they can also be insensitive.

“In my case it was not easy. The hearing deficiency is horrible because you lose much of conversations and then in school, once you lose track of what’s going on in a lesson, you’re lost. So it was difficult.”

He said the best thing the Taitos could do for Felix was have him get surgery as soon as possible, with a reputable doctor.

“There have been such huge strides in terms of reconstructive surgeries done on children. They didn’t exist when I was a child and the quality of it now is phenomenal.”

In New Zealand children with microtia cannot receive surgery until they are ten years old, but the Taitos hope to take Felix to the United States for the first of two operations when he is three.

Both surgeries will cost $120,000 so the couple have set up a Givealittle account in the hope they can raise the funds to make this happen.

Despite the condition, Stanley has pursued an incredibly successful career in the music industry, something which would remind Felix microtia wouldn’t necessarily hold him back.

“A child needs to know it may be more difficult for them, but the outcome can be terrific,” said Stanley.