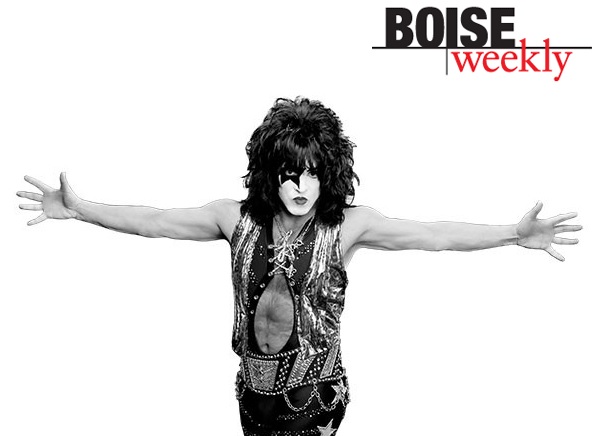 He’s a bestselling author, painter, philanthropist and a bit soft-spoken. He’s also one of the world’s premier badasses. Paul Stanley, aka Starchild, co-lead singer of KISS and co-writer of many of the band’s best-selling hits, is preparing for the band’s current 35-city tour—dubbed “Freedom to Rock”—which begins in Boise on Thursday, July 7.

“Any band with money can put on a KISS show, but they can’t be KISS,” said Stanley, who spoke to Boise Weekly about his life and legend.

Is there any part of touring that you still love?

Honestly, it’s a lot like winning the lottery but complaining about having to pay taxes. Everybody should have my life. It’s everything anyone could ever dream of. All presidents want to be rock stars; but rock stars don’t ever want to be president.

To that end, do you feel some responsibility to your fans?

We have a legend to live up to and a standard that we’ve kept from the very beginning. I don’t take it lightly. This kind of stature doesn’t come without hard work. But that doesn’t mean it can’t be fun.

I’m certain I’m not the first to tell you that I could be at a KISS concert and see my kids and my parents there.

It would be pretty uncomfortable if I looked out on an audience that looked like an outing for a retirement community. That said, it’s amazing that we’ve become much like a tribe that crosses all generations. It’s still a thrill to see a neighbor, little brother or grandfather at our show. It’s the world’s largest cult and everybody celebrates their membership.

I must tell you that it was a bit of a surprise to learn in your 2014 autobiography, Face the Music, that you were born with a misshapen left ear resulting in a hearing deficiency.

Perhaps part of my quest for fame was really about my own insecurities. Those were magnified by having a birth defect and feeling very insecure, being a little kid who was stared at or being made fun of. Face the Music ended up being a New York Times bestseller and translated into languages all over the world. I really wrote that book for my children, for them to know what it takes to succeed and for them to understand we have a choice to see ourselves as victims or to lead the life that we deserve. For me, it’s very rewarding to share with kids to know that life can be difficult but the outcome can be terrific.

Have you ever considered that KISS arrived at the exact right time in our history of popular culture?

So it seems. I guess we were needed as much as we thought. KISS started as being the band we wanted to see but never saw. As a rock fan, I felt certain things were missing from the bands I was seeing. I think there was a lack of respect, a lack of appreciation for audiences. You had bands on the stage thinking they were doing audiences a favor. I think KISS was a wake-up call, the right band at the right time to mount the attack.

And as far as your endurance—and we’re talking about more than 40 years—my sense is that KISS is an essential rock band but the makeup and pyrotechnics only amplify that.

A crappy band with a big show is still a crappy band. We’ve seen enough of those. You’ve got to have the content. You can’t last 40 years on a gimmick. You’re only the new band on the scene just once and once that buzz dies, it’s deafening. You may end up on the cover of Rolling Stone by putting a teapot on your head; next year you’ll be serving fries.

How do you design one tour to be different from another while not being too different for diehard members of the tribe?

What are we going to do? Come out wearing red leather and hats? We’re KISS. But we try to do a better, more powerful version of what we’ve done before. It doesn’t get bigger, but it sure can get better.