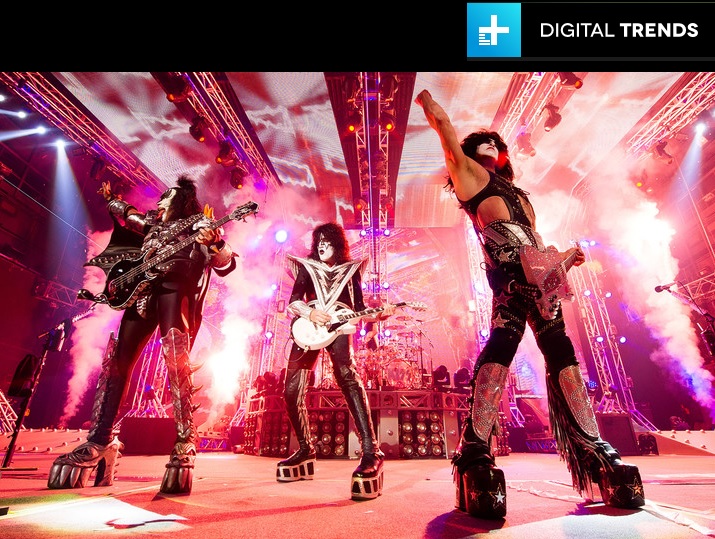 It’s a battle cry any member of the KISS Army will instantly recognize.  “You wanted the best, you got the best!” KISS has been unstoppable for over 40 years and counting, and they just upped their game yet again with KISS Rocks Vegas (out now in various formats via Eagle Vision), a live chronicle of the band’s incendiary residency at The Joint at the Hard Rock Hotel and Casino in Las Vegas in November 2014 in the midst of the band’s 40th Anniversary World Tour.

“Technology has advanced to the point now where you can really be fully enveloped by and in the center of the chaos that can be KISS from time to time,” frontman/vocalist/guitarist/eternal Starchild Paul Stanley told Digital Trends of the Dolby Atmos KISS Rocks Vegas experience.

Take it from me, the full-bore full-channel assault of KISS Rocks Vegas is most definitely best experienced via Blu-ray and the mega-multichannel Dolby Atmos option, so you can get the absolute complete effect of the set design, the band’s always mind-boggling pyrotechnics, and the glory of each KISS member’s chosen “armor.” Bassist/vocalist/The Demon himself, Gene Simmons, never fails to amaze with what he does and looks like onstage — especially the thunder of songs like Detroit Rock City, Lick It Up, and Black Diamond. An additional KISS Acoustic set featuring stripped-down favorites like Christine Sixteen, Hard Luck Woman, and Beth also show what guitarist Tommy Thayer and drummer Eric Singer bring to the KISS backline.

Want another opinion? Take it from Micki Free, the mixed-blood Cherokee/Comanche Native American guitarist/vocalist discovered by Simmons and Stanley in the ’70s who went on to play guitar with Shalamar and glam-punkers Crown of Thorns: “I knew them both really well. Those guys were my mentors in the ’70s, when I was growing up,” Free recalled. “KISS was my favorite band as a boy, you know? Paul Stanley is such a great performer, too — I aspired to dance like he did onstage. He was that guy. I wanted to play guitar like Hendrix, and dance like Paul Stanley.”

Stanley called Digital Trends right before heading directly to the band’s recent gig in Bridgeport, Connecticut to discuss why KISS Rocks Vegas totally rocks in Dolby Atmos, what he feels the vinyl format is lacking, and what it was like working with original KISS Spaceman guitarist Ace Frehley again on his new solo album. Shout it, shout it, shout it out loud…

Digital Trends: I’ve been watching KISS Rocks Vegas on Blu-ray and in Dolby Atmos, so I think we have to modify a certain phrase of yours to, “You wanted the best, you got Dolby Atmos.”

Paul Stanley: Documenting that show with flying drones, Dolby Atmos, and everything else — it was a huge success for us. To do KISS Rocks Vegas in that way was something we couldn’t say no to — the idea of building a show that didn’t have to be transportable or taken down every night. We could basically do a stadium show in a small venue, because we brought it in piece by piece.

The visual presentation and the surround sound is just fantastic, and I especially enjoyed getting blown to bits by your classic guitar “destruction” at the end of the show. You must be really pleased with how it all turned out.

Oh, very pleased; very pleased. The band was great, the venue was great, and the show was great. Being able to really capture it in that way was very satisfying for all of us. I think it’s a great document, and a great testament, to who we are and what we are.

Having the KISS Acoustic set in there as a bonus, and getting to hear classic songs like Plaster Caster all stripped bare, just adds to the overall package.

Yeah. We wanted to do more than just have a concert, so to speak, so including our acoustic set, which we do every day before our electric show, is something like MTV Unplugged — people get to see what we are when you strip everything away.

Right, and if you don’t have good core songs to begin with, stripping them down in that way won’t get them across any better. Because KISS songwriting has been so strong for the past 40-plus years, these songs really come across acoustically.

I think so. You can enhance something with as many bombs and laser beams as you want, but a crap song is a crap song.

For those of us who put the needle to the groove on the Destroyer LP back in the day [1976], I can definitely say you have plenty of good songs to pull from. Would you say vinyl is your favorite listening method?

(slight pause) That’s an interesting one. I know people swear by vinyl. For me, what it has in warmth, it lacks in top end. It’s interesting for me, because I like a certain, I don’t want to say, strident top end to something — but I like more highs, perhaps, than most vinyl has. It certainly has more warmth, and I understand that. Me, I’d rather listen to vinyl, and then re-EQ it.

Read the rest of the story at: http://www.digitaltrends.com/music/paul-stanley-kiss-vinyl-streaming-atmos-interview/#ixzz4LBN7eck1