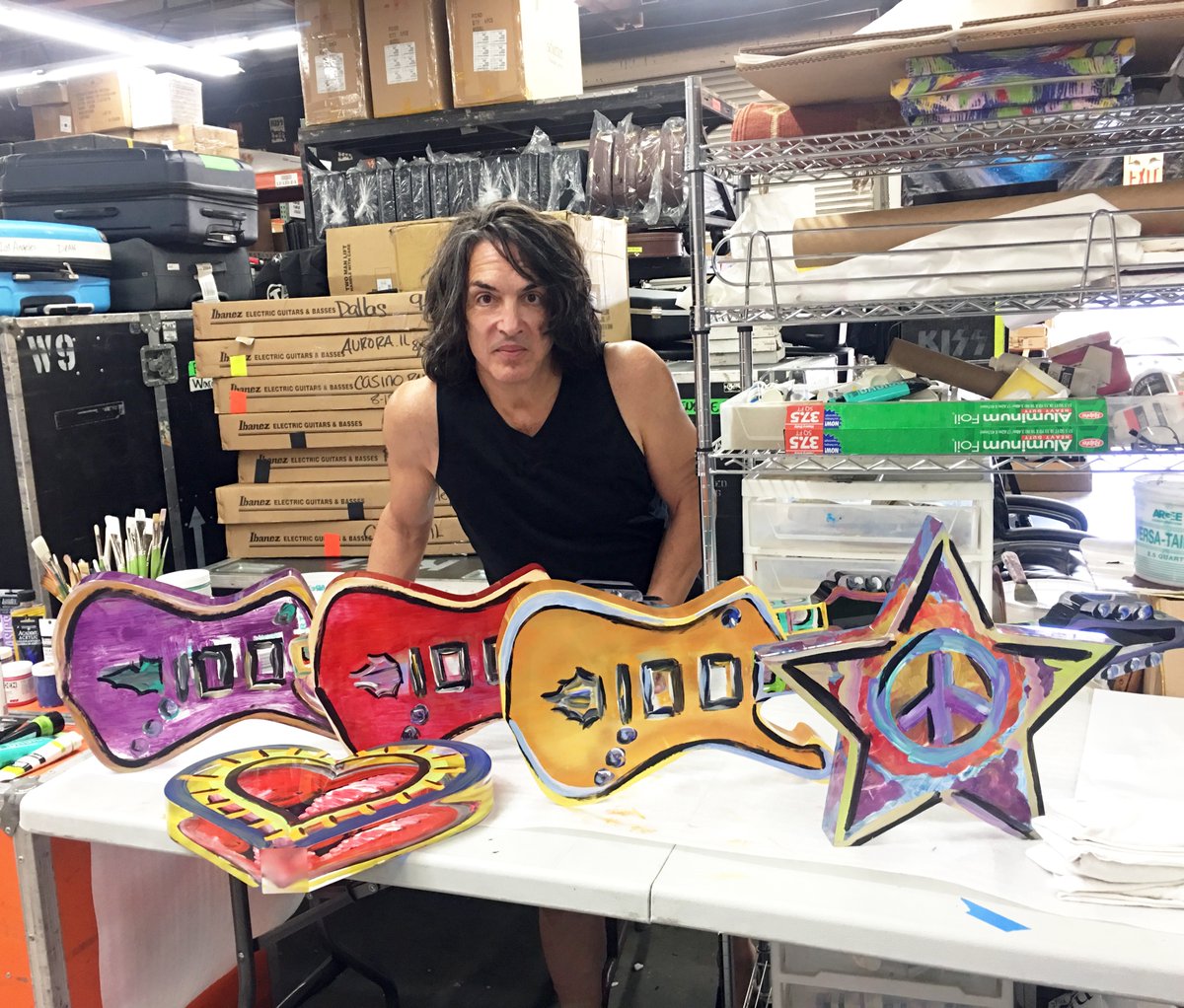 Paul Stanley, founding member and lead vocalist for the classic rock group KISS, has an art show at Wentworth Gallery in Short Hills, NJ on April 28. I recently interviewed Paul about his artwork, KISS, and much more.

You may not know this, but I’m the reporter that gave your son, Evan, his first cover story in the U.S. Last year, when this landmark event took place, what was that moment like for you?

Yeah, I so appreciate that. He’s onto bigger and better things. He left The Dives because the band was, essentially, him. He’s writing some amazing songs. He just needs room to grow. It just reached a point where I heard his newer material and I was just like, “Don’t compromise what you’re doing.” He’s on to some really big stuff. He’s very thankful, as am I, for what you did. Evan is a terrific guy, and I’m a huge fan of his, as a person. He’s determined to do this his way, and I give him a lot of credit. He’s got a great, strong work ethic. I was thrilled for him. And he doesn’t take it lightly, nor do I.

With KISS taking the year off from having a full-fledged tour, you’ve been showcasing your  beautiful artwork at events hosted by Wentworth Gallery. How do you approach creating your paintings? Do you know what your striving to accomplish before you start, or do you just start painting and see what happens?

Interestingly, earlier on, I was basically painting as a cathartic means. It was really just something to deal with, kind of, a whole lot of emotional issues that were going on in my life – relationships. It was more a sense of purging, whereas now a lot of time goes into figuring out what I want to do before I do it. So, I find myself, probably, spending more time trying to figure out how I’m going to do something than actually doing it. I’m in the studio right now working, and last night was me saying to myself, “OK, how am I going to pull this off?” I’m in the home stretch now. I’m really having a great time. I tend to define myself by the outlets I find, and I’ve found so many. I think people need to give themself more leeway. There are plenty of people around you who are going to hinder your creativity, so why not do your own? It’s crazy. When people say to me, “I can’t paint, I can’t draw,” I say, “Nonsense.” Just because you paint a Coke bottle and it doesn’t look like a Coke bottle doesn’t mean it’s not great. Give yourself a chance. It’s amazing what you’ll find over time that you can do. It doesn’t mean you’ll do it all tomorrow, but you have to start somewhere.

When you paint, do you set goals for yourself? If so, what kind of goals?

My only criteria in painting is color, and my artwork is all over the place. I don’t want to limit myself. I’m having too much fun, and it’s too exciting to explore my creativity. The only parameters I have are bold colors. To me, bold colors I think very much affirm a love of life. It may seem corny to some people, but this attitude has gotten me to where I am. A positive attitude and an excitement with every day is what my life is all about. It doesn’t mean that every day is great. I’ve had my share of issues and things I’ve had to deal with in my life but life is a miracle, every day. You don’t dwell in where you are. You look forward, and that’s really my mantra.

On February 9 KISS filed an application with the United States Patent and Trademark Office to trademark “The End Of The Road” for the purposes of “live performances by a musical band.” Naturally, this resulted in many fans assuming that KISS, namely you and Gene, are about to embark on a final farewell tour. What are the details on why this trademark was filed?

It’s not the first trademark that’s been filed. I thought it was a terrific name, and I was surprised nobody had used it before. I wanted to make sure that when we used it, and there will be a time that we do, I imagine – I wanted to be sure that we own it and it’s ours. When we wanted to go out and do the “Hottest Show On Earth” tour, Ringling Bros. came to us and said, “You can’t do that.” It set off a light and bell for me. We’ve always had slogans or sayings that are synonymous with us, and this was another. Everything does end, in one form or another. When it’s my time, I want to go out in style, and I want to go out guns blazing. So, when I came up with this idea, I thought let’s make sure we tie this up.

CLICK HERE to read the rest of the interview now.