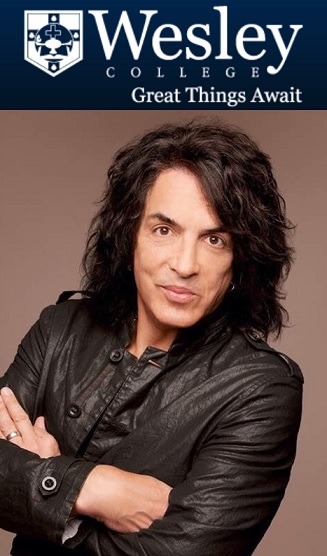 Wesley College has announced Paul Stanley, world-renowned musical icon, Rock ‘n Roll Hall of Fame inductee, legend of the stage, accomplished artist, author, and entrepreneur will be the speaker at the 2018 Commencement ceremony on May 12th.

For more than 40 years, Paul Stanley has been considered one of the most recognizable front men in the history of rock and roll. Although preferring to live his off-stage life out of the media spotlight he continues to be the chief songwriter, driving force and unwavering voice of KISS. A visionary and trendsetter since the early 1970s, Stanley’s passion for both the musical and visual arts has been a key contributing factor to the ongoing worldwide phenomenon known as KISS.

In addition to being one of the founding members of the biggest musical act in history, and overseeing KISS’s worldwide brand with more than 2,000 licensees, he is; an accomplished solo artist spanning the musical landscape from rock ‘n roll to soul; a stage actor of renown, playing the lead role of the Phantom in “The Phantom of the Opera” during its final historic six month run in Toronto; author of the bestselling autobiography, Face the Music, A Life Exposed: an entrepreneur and partner in one of the nation’s fastest growing restaurant chains, Rock & Brews; and has given his time and energy in support of numerous causes that help change people’s lives, including About Face, the House Research Institute, and several that support our Veterans, including Hiring Our Hero’s and Wounded Warrior Care Project.

“Paul has entertained, inspired, and helped better the lives of millions of people around the world,” said Wesley President Robert E. Clark II. “I have known Paul for over three decades and I am excited for our College and community to be able to have the opportunity to meet and hear from my friend and true American legend.”