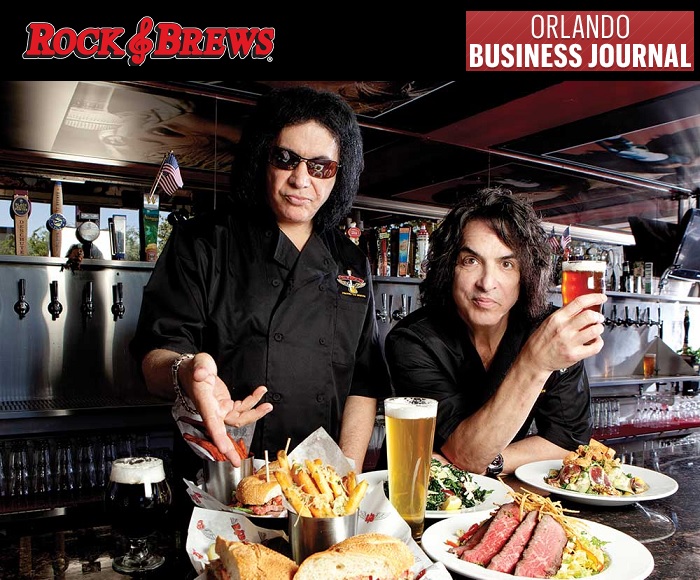 Get ready, KISS fans: Front men Gene Simmons and Paul Stanley are expanding their restaurant brand Rock & Brews to the Sunshine State with plans to open a location in Central Florida next month.

Simmons and Stanley announced Oct. 8 they have inked a deal with multi-unit franchise operator R&B Florida LLC to open several Rock & Brews locations in Florida, with the first opening in Oviedo in November. Simmons and Stanley will host a grand opening event for the Ovideo location in January, according to a news release.

The 7,500-square-foot eatery at 7131 Red Bug Lake Road will offer American comfort food, a full bar, an outdoor patio and the Rock & Brews signature Great Wall of Rock. The location also will be dog-friendly and offer a play area for kids.
R&B Florida LLC is comprised of a group of local, seasoned restaurant professionals, including Regional Managing Partner Scott Paul, who was the managing partner for Outback Steakhouse and worked at three Orlando locations for more than 12 years.

The deal with R&B Florida LLC is the third of several multi-unit operating partners.

“Rock & Brews is a unique restaurant and entertainment brand that appeals to a multi-generational audience with its energized environment, exceptional food, and extensive selection of international and craft beers,” Stanley said in a prepared statement. “At the heart of the brand is our deep devotion to the communities in which we operate, and we are very excited to become an active member of the Oviedo community.”

KISS is no stranger to Central Florida, as the rock legends invaded the Amway Center at the 2013 ArenaBowl Weekend concert. Check out photos from the event here.