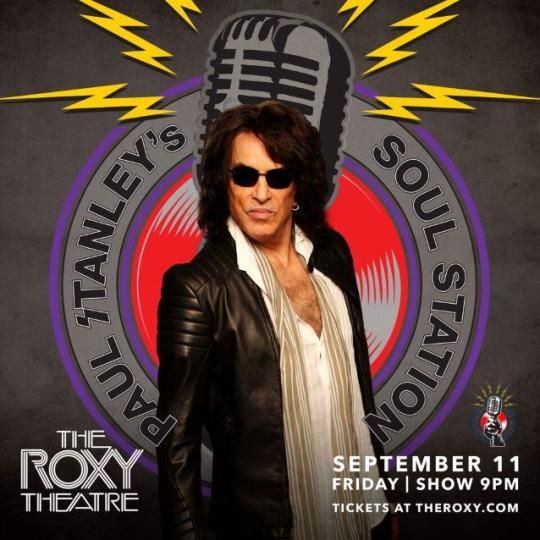 When it comes to the members of stadium-rockers/blood-spitters/facepaint-slatherers/unabashed merch-peddlers KISS, the adjective “authentic” doesn’t immediately spring to mind. And most people probably wouldn’t peg anyone in KISS as an aficionado of the golden age of Motown and Philly soul. But KISS’s Paul Stanley was a changed man – a man unmasked, or a man with nothing to lose, if you will – when he debuted his labor-of-love, note-for-note R&B cover band at Los Angeles’s 500-capacity Roxy club Friday night… with KISS’s longtime drummer Eric Singer playing behind him, and Gene Simmons and Bruce Kulick observing from the audience.

Taking the stage in a simple suit jacket, vest, and jeans with his crack 10-piece ensemble, Paul Stanley’s Soul Station, the 63-year-old rock legend – a man usually known for his wildly mouthy rock ‘n’ roll banter – spent much of his between-song stage time pining for the soulful music of his youth. “There was a time not too long ago when you’d turn on the radio and you’d hear songs written by real songwriters, sung by real singers, played by real musicians,” he sighed at the start of the show. “These songs mean a lot of us… These songs were built to last… These songs weren’t written with a computer!”

It all could have seemed like the grumblings of some grumpy old man, a sort of rock ‘n’ roll Andy Rooney, if Stanley hadn’t been so damn cheerful – and so utterly earnest. This was not some novelty act or a lark. Stanley’s respect and love for this material was admirably evident, whether he was doling out history lessons on Gamble & Huff, Stax/Volt, and Holland-Dozier-Holland or, in an uncharacteristically ego-free moment, letting gifted backup singer Crystal Starr handle wailing lead vocals on the Jackson 5’s “I Want You Back” (one of the set’s highlights) while he held back and simply rattled a tambourine.

“We’ve got great, great singers. I would be nothing without these singers,” Stanley admitted, referring to Starr and her fellow dynamite backup belters, Ayana Layli and Nelson Beato. “This feels like family. This feels really special… I am so thrilled and so humbled to be making this music with these people.”

As for when Stanley took the lead on ’60s and ’70s soul classics like the Temptations’ “Just My Imagination,” Smokey Robinson’s “Tracks of My Tears,” or Al Green’s “Let’s Stay Together,” his vocals were disappointingly low in the mix and sometimes drowned out by the more robust Starr/Layli/Beato. (Someone needed to crank up the volume on his old-fashioned chrome microphone!) However, his falsetto soul croon was still surprisingly legitimate. And the fact that Soul Station stayed faithful to the songs’ original arrangements – no show-offy metal guitar licks, no fussy arena drum solos, nothing reminiscent of Stanley’s famous main band – proved how much this music means to him.

In fact, Stanley’s enthusiasm was so infectious – straight through to the encore of “O-o-h Child,” a song he said he picked because of its message of optimism and hope – that not a single KISS Army member in the intimate audience ever cried out for “Love Gun” or “Detroit Rock City.” The fans were as respectful of this music as their idol was, making for a sweet night of soul celebration.

The full setlist for Paul Stanley’s Soul Station show at the Roxy was:

“Get Ready” (The Temptations)

“La-La Means I Love You” (The Delfonics)

“Just My Imagination” (The Temptations)

“You Are Everything” (The Stylistics)

“Tracks of My Tears” (Smokey Robinson & The Miracles)

“Betcha by Golly, Wow” (The Stylistics)

“The Way You Do the Things You Do” (The Temptations)

“Who’s That Lady?” (The Isley Brothers)

“This Old Heart of Mine” (The Isley Brothers)

“Could It Be I’m Falling in Love” (The Spinners)